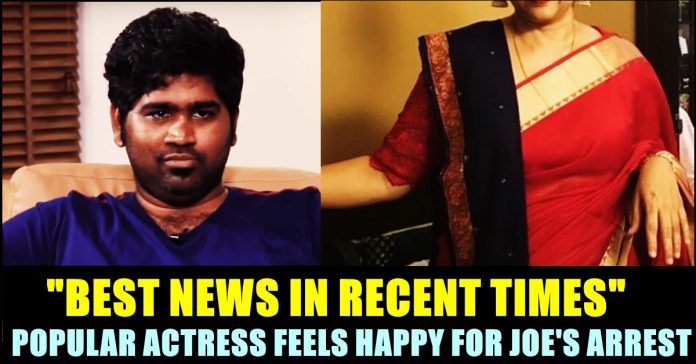 Joe Michael Got Arrested For Cyberstalking !!

For past few days, Joe Michael has occupied a permanent spot in Youtube trending list. He is not a Bigg Boss participant or an actor who shared screen space with Vijay in BIGIL but managed to register his face among Tamil netizens through the interviews he gave to Youtube channels regarding Meera Mithun. Joe Michael kept releasing audio conversations and screenshot evidence in some of the top youtube channels to prove that Meera Mithun is involved in fraudulent. Now he has been arrested by police for cyberstalking.

The 31 year old business man was arrested on Saturday for stalking and criminal intimidation under Information technology act. He was arrested by the women and children wing of the city police according to reports. “He was arrested based on the complaint registered by Congress member Apsara Reddy” said one of a police officer.

The police said that he made defamatory and derogatory comment on the complainant in social media platforms, which caused her mental depression. Summons were issued against him but he failed to appear in person twice which resulted in Arrest warrant being issued against him. Joe Michael also accused for shouting at a women police officer who went to his place for inquiry. He made threats and used abusive language at the police officer, according to sources. Now, as per reports he was remanded on judicial custody.

After seeing the news regarding the arrest of Joe Michael, she wrote “The best news I have ever heard in recent times, thank you Apsara for initiating this effectively.” Check out her tweet below :

The best news I have ever heard in recent times, thank you @talktoapsara for initiating this effectively. pic.twitter.com/UTvm8s44oI

If you are not living under a rock for past 6 months, you must have known about the controversy of Joe Michael and Meera Mithun. Joe Michel has been accusing Meera Mithun for fraudulent since before her BIGG BOSS stint. Joe has been alleging that she has cheated money of many beauty models in the name of conducting beauty competitions. “By taking selfies with high profile celebrities, she would cheat models and their family”he said in one of his interview. Recently he even started his own youtube channel to interact with the people who became his followers through his interviews,

Previous articleRajinikanth Felt Weak After Watching This Movie Of Kamal !! WATCH
Next articleTracker Uploaded Poster At A Wrong Time !!

Hindu priests who are appointment at the most famous Thiruchendhur Murugan Kovil has been caught scamming the devotees by receiving Rs. 1000 per head...

Who Is Bruno ?? Why Celebrities Are Trending #Justice For Bruno Along With Public ?

In a horrific incident that took place in state Kerala, a dog was beaten to death by two juveniles and a youth in the...