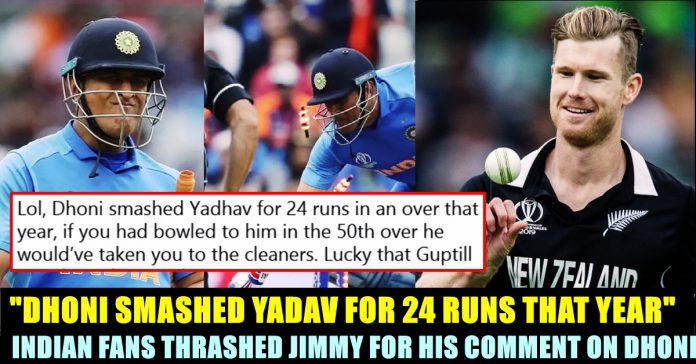 Jimmy Neesham who is pretty much interactive with his followers in Twitter, recently made a comment on Dhoni’s wicket at the world cup semi finals. He said that he thought that his team is probably going to win the match while Dhoni was in crease. After getting his wicket through a direct hit of Martin Guptil, Neesham says that he thought that his team is definitely going to win the match. This comment from him, irked enormous number of Indian fans as they still believe that Dhoni could have made it for his team if he stayed in the crease till the last ball of the match.

However, few fans of team India also supported Jimmy saying that his statement is reasonable as Dhoni was not in his prime while playing the semi finals of 2019 world cup. Dhoni, the cricketer who has a huge fan base in world cricket played his final ODI world cup tournament in 2019. His run out in the semi-finals match against Black caps shattered the dreams of Indian fans. It devastated the fans in the stadium as there was a pin drop silence in Manchester crowd.

The two day international world cup semi finals match went in favours of the black caps due to the top order collapse for the first time in this world cup. Three of the top order batsmen scored just 1 run and got out while chasing just 240 runs in 50 overs. Kane Williamson’s brilliant captaincy was lauded by fans and cricket experts. When India struggled at one point and seemed to lose the match by large margin, it was Ravindra Jadeja and Dhoni’s partnership which kept the hopes of billions alive.

Jadeja played the knock of his life time and got out while trying for a big one in Boult’s over. Dhoni who has done it for many times for team India, got run out by Martin Guptil’s sharp direct hit throw. Now, Jimmy Neesham, all rounder of New zealand who played the semis, was asked to comment on the wicket by a fan of India. “Before: Cool we’re probably gonna win. After: Cool we’re definitely gonna win” Jimmy replied to the fan.

Fans started flooding the comment section of his reply with their opinions. “Probably gonna win? Seems you haven’t seen MSD’s game much otherwise would not have been this cool there” a fan said whereas another one wrote “You won when Jadeja got out. It was too difficult & needed MSD of 2011-13 when he was at his prime as the finisher. In 2019, he was way past his prime”

Probably gonna win? Seems you haven't seen MSD's game much otherwise would not have been this cool there 😏.

Lol, Dhoni smashed Yadhav for 24 runs in an over that year, if you had bowled to him in the 50th over he would’ve taken you to the cleaners. Lucky that Guptill saved you from embarrassment. https://t.co/zA6kEyPdC4

This happened in 2019 and Umesh Yadav is a way better bowler than you 🙂 pic.twitter.com/nNs3wNawps

This guy bowled the last over.
Would have joined the elusive list of Shaminda Eranga and Clinton Mckay Club if MS hadn't got run out lol https://t.co/MLaTJGEOjK

With all due respect to you Jimmy, I think you must have been under tremendous pressure before MS got out because it was you who were gonna bowl the final over of the match. And we have seen way too much of drama unfold in the last of the overs. 😊

Think this was just hype .. Actually after Jadeja's dismissal the match almost ended…

Lol what wrong has he written that people are writing shit match was over in first 10 over 5-3 that's it just our ass was saved by Jadeja there https://t.co/wD9HrwlFiO

Previous article“Nayanthara Got Those Roles After I Rejected Them” – Actress Opened For The First Time
Next articleAjith Film Heroine Replied To A Fan Who Questioned On Her Caste Name !!