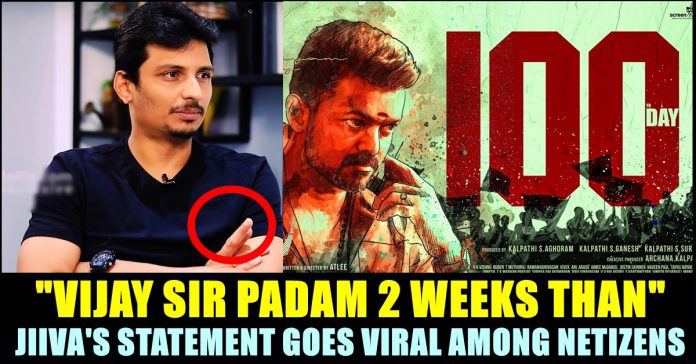 Actor Jiiva is known for his films like Kattrathu Tamizh, Raam, Ko, Siva Manasula Sakthi etc. He made his debut as a lead actor in his father’s 50th production, Aasai Aasaiyai. After Sivaji Ganesan, Jiiva is the only Tamil actor to have been awarded at the Cyprus International Film Festival for his performance in the film Raam.

Though the actor gave some most successful films, he is having a hard time lately as his last few films became a box office dud. His films such as Kavalai Vendam, Pokkiri Raja, Sangili Bungili Kadhava Thora, Kee, Gorilla disappointed his followers who are expecting him to do content oriented films. However, the actor has a handful of films to be released.

His film “Gypsy” of director Raju Murugan has created huge expectations and is slated to release soon. Apart from that Jiiva is all set to appear in “Seeru” which is his next release along with “83”. In one of a promotional interview Jiiva took part recently, the actor opened on many things about his experience in film industry.

While talking about why audience couldn’t able to see him often in big screens, Jiiva said that there was a big change took place in the Tamil film industry. “Nowadays, 200 films are getting released per year in Tamil cinema. Earlier we have seen films having 100 days of theatrical run. But nowadays, maximum number of films are running only for one to two weeks in theatres. Even Vijay sir’s film is running only for 2 weeks. We live in that kind of era about which we can’t complain. This major change left us to be choosy while selecting the release dates. In 2019, two of my movies were supposed to get release. All of them got postponed due to various reasons” said Jiiva in the interview.

“We don’t know who are filing legal cases against us in last minute or We will be facing financial troubles. Considering the theatre situations, we are being very selective about the release dates. But the movies which are going to release will not disappear like Instagram stories. It will have its own way of story telling” said the actor in the interaction with RJ Parvathy.

Though Jiiva talked about many of his experience throughout the interview, the particular part of the actor saying that actor Vijay’s film is also having only 2 weeks of theatrical run, has grabbed the attention of the Internet users. It is notable that producer of “Bigil” Archana Kalpathi has posted a tweet saying that their film ran 100 days in Box office with a record breaking collection.

Comment your views on this statement of the actor !!

Rajinikanth Very Badly Affected By The Split Between His Daughter And Dhanush : Reports

Days after Dhanush and Aishwarya announced about their separation, a report on how bad it affected actor Rajinikanth and how he reacted to his...