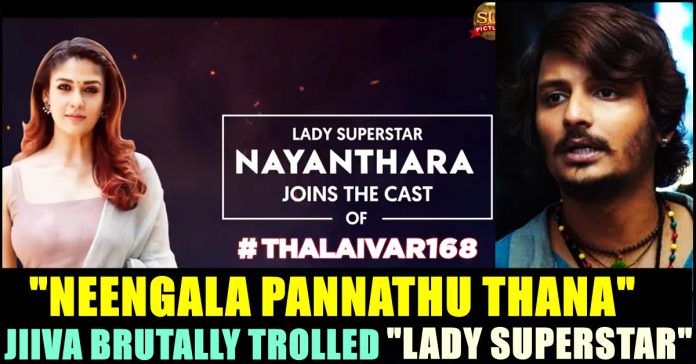 Most probably Nayanthara is the only active heroine to have a tag in front of her screen name similar to the top heroes of Indian film industry. Fans of the actress fondly call her as “Lady Superstar” as she is the sole survivor in the South Indian film industry among those who got debuted in the year 2003 as heroine. Now in a recent youtube channel interaction, actor Jiiva who acted with Nayanthara in films like “Ee” and “Thirunaal” has took a sly dig at her tag “Lady Superstar”.

Nayanthara is one of the very few female actors who rules Tamil film industry for more than 15 years. Being the highest paid actresses of South Indian film industry, Nayanthara is also the only actress who manages to act in both female centric movies and hero oriented movies. The surprising fact about it is that the “Bigil” actress shines in both the regions. Recently she received favourite actress award for acting in”Bigil” and “Viswasam” in the Zee Cine Awards.

Across her long professional career, Nayanthara got compared with many actresses who happened to be her competitors but the actress is still impressing the audience with her versatility. It is highly believed that Nayanthara gained her tag “Lady Superstar” because she is lasting in film industry for a long time like Superstar Rajinikanth.

In a promotional interview of his upcoming movie “Seeru”, Jiiva was asked by host about the way he sees the “Lady Superstar” tag of Nayanthara. To her question, Jiiva answered by saying that it is a mere exaggeration of media and Nayanthara is always a Superstar.

“It is you media people who did the Lady Superstar thing. She is always a Superstar. She has always been a very good performer and She always had that fame. It is just the tag what you have given today” said the actor in the interview, video of which is attached below :

However, while sun pictures made an important announcement about Nayanthara’s addition in the project Thalaivar 168, they added the tag “Lady Superstar” to mention Nayanthara. It is notable that Nayanthara will be appearing alongside Rajinikanth for the fifth time.

Apart from this, Nayanthara is also working in a project named as “Mookuthi Amman” which is RJ Balaji’s directorial debut. Under her own production house, the actress is portraying a character of a blind in “Netri Kann” as well. After starting with a controversial career, Nayanthara’s portrayal of Sita in Sri Rama Rajyam earned her the Filmfare Award for Best Telugu Actress and the Nandi Award for Best Actress. She won the Filmfare Award for Best Tamil Actress for her performance in Raja Rani, Naanum Rowdy Dhaan and Aramm. She was last seen in Rajinikanth’s Darbar.

What do you think on this statement of Jiiva ?? Comment your views !!

S. Ve. Shekhar is a Tamil playwright and film actor. In 2006, he made an entry into politics by contesting and winning the Legislative...