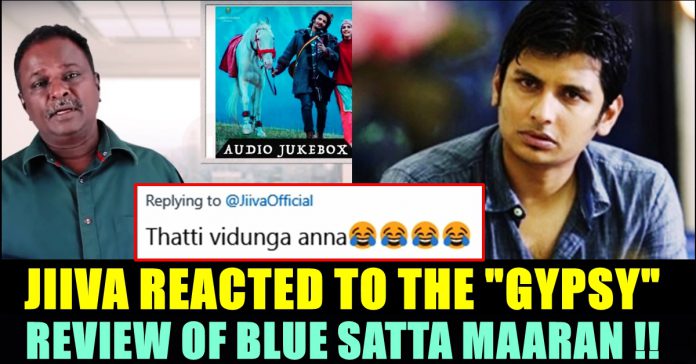 Jiiva Reacted To The Review Of “Blue Sattai Maaran” !!

Jiiva reacted to the “Gypsy” video review of popular Tamil movie reviewer “Blue Satta” through his official twitter account. The actor who is known for his blokbuster ventures such as Siva Manasula Sakthi, Ko, Kattrathu Tamizh, Ram acted in the film “Gypsy”. The film which was released on 6th of March, was directed by “Joker” fame Raju murugan. Jiiva played the role of the male lead whereas Natasha singh played the role of female lead.

The review of “Blue Satta” Maaran for the movie “Gypsy” is widely being criticized by the online users for the way he reviewed the movie. In his 4 : 59 long video, Blue Satta who started his review with usual advertisements ripped the movie apart into pieces. While talking about the story of the film to his audience, Maaran mocked the characterization of the protagonist, played by Jiiva. To describe his role, Maaran criticized it by saying that Jiiva played the role of a “begging dog”.

“As we all know, Tamilnadu based heroines are always mentally disabled. In one scene, she will ask him for a ride in his horse. When he made her ride his horse, she would ask him to go farer. At one point, the protagonist who was seen talking about communism and ideologies throughout, would elope with the heroine without a second thought.” Blue Satta mocked the film.

This review of “Blue Satta” instigated netizens to spread hatred against him. Many of those who watched the film asked him to mind his words while reviewing. One of them even asked actor Vishal to take action against Blue Satta Maaran for the way he reviewed “Gypsy”. Check out some of the reactions his review received :

Now Jiiva himself has reacted to the review of Blue Satta. The actor who changed his twitter handle name into “Gypsy” as a part of his promotional activity, wrote “Ada Pavi” with laughing emojis.

This sportive reply from Jiiva impressed his followers which is evident through their replies. On the work front, Jiiva’s “83” is slated to release on 10th April 2020. He is also expected to be seen in “Kaadhalil Santhippom” in near future. Comment your views on these reply of Jivva !!

A Swiggy delivery person named Mohana Sundharam, video of whom getting slapped by a traffic police went viral, shed tears while talking to a...

In the Trailer-Audio launch of Kamal Haasan's "Vikram", Udhayanithi Stalin who is distributing the project through his Red Giant Movies, said that no one...