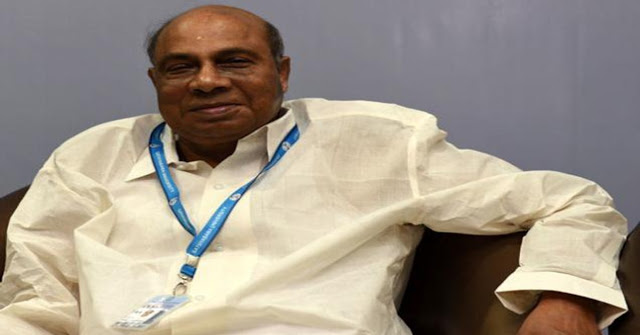 Well known politician turned educationist and Founder of Jeppiaar Educational Trust Jeppiaar passed away in Chennai on Saturday. The 85-year-old was brought dead to the Global hospital in Chennai.
The Chancellor of Sathyabama University, Jesadimai Pangiraj also known as JPR started his career as a police man. A former member of the Tamil Nadu legislative assembly and AIADMK member Jeppiaar was known to be a close confidante of former Chief Minister MG Ramachandran. He had also acted as the chief whip of the Tamil Nadu assembly.
He was AIADMK secretary of the Chennai District from 1972 to 1987 and was special envoy to the Chief Minister.
In an interview to TNIE, his daughter Maria had once said, “Appa was like MGR’s right hand. They shared a close relationship. In fact, when we were born, it was MGR who named us Anbu Nila and Thanga Nila. We were quite young when MGR passed away so we haven’t interacted much with him but he taught us many things in life.”
It was in 1988 that Jeppiaar founded the Sathyabama Engineering College. In the next few years, Jeppiar’s empire grew and he established the St.Joseph’s college of Engineering and the St.Mary’s School of Management Studies in 1994.
The Panimalar chain of colleges too started in 1990. The empire consists of numerous engineering, medical, dental and management colleges all across Tamil Nadu.
Jeppiaar was a controversial figure in the field of education as almost all his colleges, especially the engineering colleges, followed a code of strict discipline. Jeppiaar was known to be the man who introduced the system of no interaction between the two sexes in the state’s engineering colleges. Though his style of functioning had come under criticism, he was also praised for ensuring colleges with good facilities and maintaining a career-oriented approach.
An industrialist, Jeppiaar also established many industrial units and other endeavours including Jeppiaar cements, milk, travels, steel etc. He also established Tamil Nadu’s first harbour.
He is survived by his wife and daughters. The reason behind his death is suspected to be Health issues as he already faced many problems, still the official announcement is yet to come from either the family members and Police, so lets wait and see what has done him.
source – NewsMinute