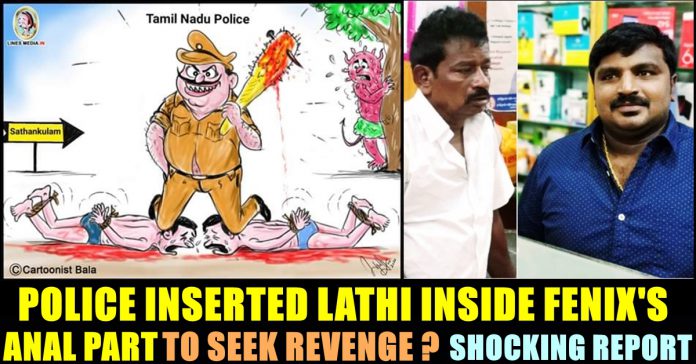 Jayaraj (59) and his son Fenix Immanuel (31) were running a mobile shop named as APJ in Sathankulam town. On Friday, Jayaraj closed his shop around 8 : 15 PM and police personnel from the Sathankulam station, who were on patrol duty, reportedly pulled him up for running the shop beyond the permitted time. An argument took place at the spot it seems.

The police officers visited the shop again on Saturday and had an argument in front of the public with the father and son duo. As soon as Fenix intervened the argument, police officials arrested both of them and booked cases under several sections of the Indian Penal Code against them. During the argument, Police attacked Jayaraj and in response, Fenix attacked the police, reports suggests. The duo were booked under the sections 188 (disobedience to order duly promulgated by public servant) and 353 (Use of force to deter public servant from duty).

According to the friends and relatives of Jayaraj and Fenix, they were physically alright and had no health issues till 20th June. On the evening of the same day, Fenix complained of chest pain and Jayaraj had an high fever, according to sources. Both were taken to the Kovilpatti government hospital, where Fenix died on Monday evening and Jayaraj succumbed to respiratory illness on Tuesday morning.

The post mortem report of the deceased is expected soon which will play a vital role in the case. Selvarani, wife of Jayaraj lodged a police complaint alleging that police brutality led the demise of her son and husband. She said that police attacked her husband and son, used curse words and threatened to kill them in her complaint letter to the district criminal court and Assistant commissioner. She requested to book the police officers who are responsible for the crime and urged their suspension from duty. Two sub inspectors have been suspended.

As soon as news broke out, peeple in social media trended the hashtag #சாத்தான்குளம் Indiawide and seeking justice for the demise of father and son.

Previous articleProtest Against TN Police Over “Custodial Death” Of Father & Son !!
Next articleBhumika Requests People Not To Blame Bollywood Stars For Sushant’s Demise !!

Tamilisai Soundararajan Extended Her Support To Sai Pallavi Who Got Body Shamed By A Face book User !!

Tamilisai Soundararajan, governor of Pondicherry, extended her support to actress Sai Pallavi who got body shamed by a Facebook user. According to Puthiya Thalaimurai,...

“I Won’t Take Selfie With Actors In My Life” Rahul Opens For The First Time !! WATCH !!

Even after Veteran Tamil actor Sivakumar apologised for slapping a phone off a fan’s hand, people have not stopped criticising him for the act....

The impact created by "Cyclone Nivar" across the state Tamil nadu is huge. Many parts of the capital and Kadalur district didn't have electricity...