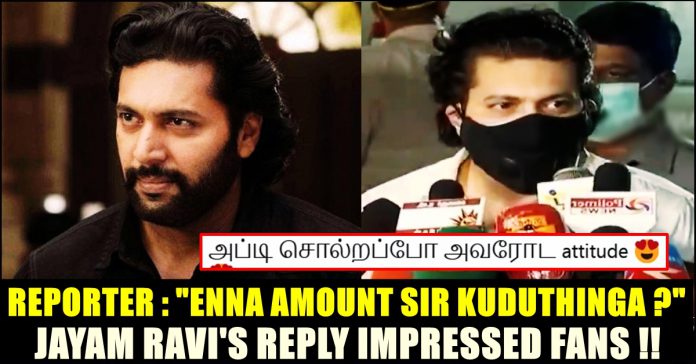 Amidst the second wave of COVID 19 virus, frontline workers are putting their lives on the line to control damage. The country has been witnessing 3 lakh plus infections in daily basis for the past three weeks and the people are struggling to cope up with the medical requirements with the lack of bed, oxygen and facilities. Along with politicians, important personalities from other industries such as sports, cinema are also doing their part to combat the deadly virus. Many cinema celebrities with highest number of followers in social media, has been sharing SOS posts to help others.

As an extension, popular actors from Tamil film industry has been stretching their supportive hand by donating money to the Tamil nadu Chief minister’s Public Relief fund to support the government in the battle. Actors Suriya, Karthi who belongs to the family of veteran actor Siva kumar has donated Rs. 1 crore whereas actor Ajith kumar has send Rs. 25 lakh to the relief fund through bank transfer. He also donated Rs. 10 lakh to FEFSI to help the workers of the film industry.

My respect for #AjithKumar went up several notches😍! Yes, the man, after donating Rs 25 lakhs to the #TNCMReliefFund , has donated Rs 10 lakhs to #FEFSI! But that is not all! My sources tell me #Ajith has donated to several other film organisations! He did the same last year! pic.twitter.com/7wAXZH4w2z

Super star Rajinikanth met Chief minister MK Stalin in person and contributed Rs. 50 lakh on Monday. After meeting CM< Rajinikanth urged people to follow the COVID 19 guidelines of government to prevent the spread of the virus.

He has contributed Rs 50 lakh to the CM Public Relief Fund to help the state govt fight the Covid pandemic.

Rajinikanth also appealed to people to follow the guidelines issued by the govt. #COVIDSecondWave pic.twitter.com/yfAkZe37VK

My father-in-law Mr. S.S.Vanangamudi, husband Vishagan, his sister and I visited the honorable Chief minister @mkstalin sir this morning to hand over our contribution of 1cr for the chief ministers #CoronaReliefFund from our pharma company Apex laboratories, Makers of #Zincovit pic.twitter.com/jXDEIXaM3V

Many other cinema celebrities including director Vetri maaran, Shankar, Director Mohan Raaja, A.R Murugadoss, Udhayanithi Stalin made their contributions as well. Meanwhile, a video of actor Jayam Ravi’s press meet after making his donation to the CM fun relief is doing rounds in social media platforms. When a reporter asked the actor to disclose the amount he donated, Ravi, politely said that he contributed what he could and made it clear that it is not necessary to disclose the amount.

The actor’s gesture has won the hearts of many fans which is evident through the comments that were surfaced in the Internet. Jayam Ravi suggested public to follow the COVID 19 norms such as maintaining social distance and wearing safety masks. “Frontline workers are putting their lives on the line to fight the virus. We should stay safe considering their hard work, our families and ourselves.” the “Peranmai” actor said in the press meet.

When one of the reporters asked him to disclose the amount he donated, Ravi, reluctantly said “It is not that necessary. I have contributed what I could”

That's where he stands ❤️pic.twitter.com/kUs8x9oO3O

However, it has been reported that the actor has donated Rs. 10 lakh to the Tamil nadu chief minister Public relief fund.

Due to the release of his new film "Prince", actor Sivakarthikeyan is pretty much active appearing for interviews in YouTube channels and Television portals....