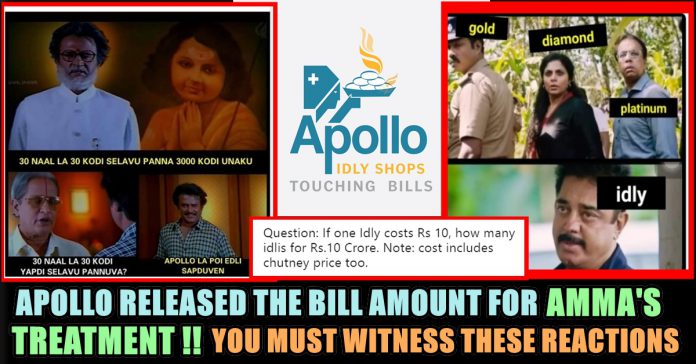 The Apollo hospital in Chennai, where Jayalalithaa was admitted till her demise, said that the expenses on her food was over Rs 1 crore.

The hospital informed the Justice A Arumughaswamy-led inquiry panel, which is probing the circumstances that led to the death of Jayalalithaa, that her food bill accounted for Rs 1,17,04,925 crore during her treatment.

The panel was constituted by the Tamil Nadu government in September 2017 under the Commissions of Inquiry Act, 1952 to inquire into the circumstances leading to Jayalalithaa’s hospitalisation on September 22, 2016 and treatment provided till her death on December 5, 2016.

Earlier, the panel summoned Tamil Nadu Deputy Chief Minister O Panneerselvam to appear before it on December 20. Panneerselvam held the portfolios of the late Jayalalithaa during her hospitalisation in 2016.

Out of the 6.85 crores, Rs 44 lakh is yet to be paid to the hospital by the AIADMK, which had announced that it would incur the bills and not the Tamil Nadu government. The details about the bill amount and expenses incurred on Jayalalithaa’s treatment was shared by Apollo Hospital in an affidavit filed by it before the Justice A Arumughaswamy Commission.   A close look at the bill, a copy of which was accessed by DH, shows more than Rs 1 crore was spent on food and beverages, Rs 24 lakh on rent for the rooms occupied and Rs 1.9 crore for health care services.
[wp_ad_camp_1] The entire second floor of the hospital was evacuated for Jayalalithaa’s stay and her close aide V K Sasikala, currently serving her four-year term in Parapana Agrahara prison in Bengaluru, stayed in a suite in the hospital. As the bill went viral on social media leading to questions being raised on the food bills, sources clarified that it was the entire amount incurred on food provided not just for Jayalalithaa but for for her caretakers, security personnel, ministers, bureaucrats and party leaders who camped at the hospital. AIADMK sources said they were not aware of the pending payment of Rs 44 lakh but said they will seek more details from Apollo Hospital on it. As soon as the update was released, Netizens shocked and started trolling Apollo hospital in a most hilarious way. Check out some of the trolls here :

Me: Sir I need a loan of Rs:1c under Mudra scheme.

Bank manager : So, what business are you going to do with that money?

Me: who said I am going to start a business? I’m going to buy idly from #ApolloHospital#jayalalithaa

Question: If one Idly costs Rs 10, how many idlis for Rs.10 Crore. Note: cost includes chutney price too.

Jayalalithaa’s death and her Apollo stay have been a matter of debate in Tamil Nadu politics for the past two years. The Commission, which was constituted in August 2017 to “dispel doubts” about Jayalalithaa’s death, has so far examined more than 140 witnesses, mostly bureaucrats, doctors, hospital officials and her security guards, and is likely to submit its report in the first quarter of 2019.

Vanitha Vijayakumar Walked Out Of BB Jodigal Show !! Check Why

Vanitha Vijayakumar released a press note saying that she is "walking out the BB Jodigal show" after facing harassment from a woman. Vanitha said...

Tamilnadu recorded its first death due to the deadly COVID 19 during the wee hours of March 25. Minister Vijaya Bhaskar took twitter to...