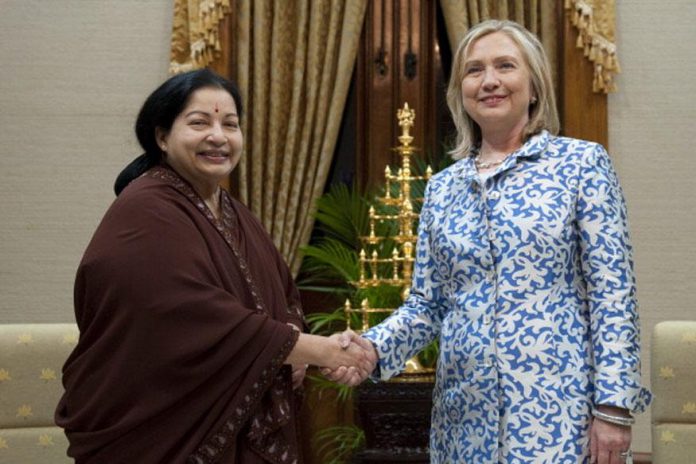 Jayalalithaa Is The Reason Why Hillary Clinton Is Trying To Become US President : ADMK MLA

If America gets its first ever woman president this November whom should it thank first? Tamil Nadu Chief minister Puratchi Thalaivi J Jayalalithaa, according to an AIADMK MLA.
The party’s Coonoor MLA A Ramu claimed in the state assembly that Hillary Clinton decided to contest the US presidential elections after being inspired by – hold your breath – Jayalalithaa.
He said Clinton’s decision was the outcome of a meeting between the two in July 11 when she as US Secretary of State visited the country.
“Today, the world is celebrating this meeting for its historical importance. Through this meeting, Hillary Clinton understood Amma’s personality and was awestruck by her proficiency in English and her encouragement. Finally, accepting the assuring words of Respected Amma, an overwhelmed US Secretary of State went back to become the presidential candidate. I would like to record that the reason for this is Respected Amma,” Ramu said.
The MLA stuck to his statement outside the Assembly as well. “When Hillary Clinton met Amma, she was influenced by her leadership qualities and achievements and that inspired her to contest US presidential polls. Only after the meeting, did Hillary Clinton decide to take a significant step forward,” he told CNN-News18.
Ramu joined the AIADMK only as recently as 2014, which according to his political rivals was why he had to outdo other loyalists by trying to please Amma with such outlandish claims.
Those who have been following politics in Tamil Nadu over the years were not very surprised.
“This is not the first time that Tamil Nadu Assembly has heard such outlandish, untrue and cringe-worthy statements. As long as the political culture of Tamil Nadu centres around hero worship, and the leader has an iron grip over the party, airing of such sentiments will continue. I’m sure the Conoor MLA will be outdone in no time by someone else,” said Radhakrishnan, a political analyst.
source – News18
Previous article‘I Have Been Slapped By Jayalalitha, My Life Is Under Threat’, Expelled AIADMK MP Sasikala Pleads For Help!
Next articleYour Smartphone Fell In Water? Don’t Panic; Just Follow These Steps, Mobile Will Start Working!