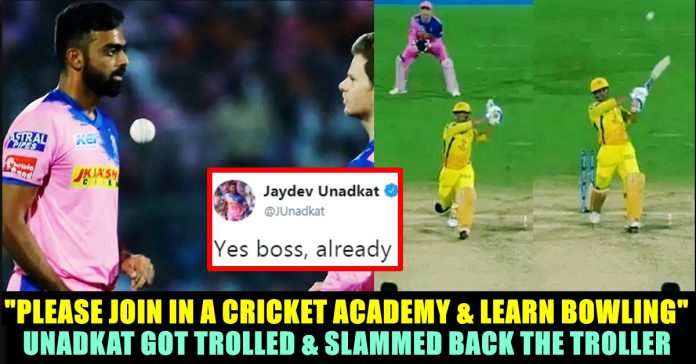 Jaydev Unadkat, the left-arm pacer from Rajasthan Royals, who constantly got trolled for his poor performance in this IPL has replied to one of his trolls in a bold manner. Unadkat, who was bought for huge money in the auction, once again has struggled with the ball in hand. Rajasthan Royals had a really disappointing season this year as they finished seventh on the points table with 11 points in 14 games. There were a variety of reasons as to why they didn’t perform better but the main reason was their Indian fast bowlers failing to deliver. Jaydev Unadkat and Dhawal Kulkarni weren’t at their best as they were below par this season. Rajasthan Royals is the only team which doesn’t have any world cup playing players as well.

Many cricket analysers and fans blamed the captaincy of Ajinkya Rahane in the first half of the season which resulted in Australian skipper Steve Smith taking over the captaincy. It is pretty obvious that fans wanted him to perform far better than the manner in which he has played in this season; he took only 10 wickets in 14 matches and his economy rate was 10.66. Some fans trolled him for his performance but one fan was very rude as he asked Jaydev Unadkat to join a cricket academy and learn how to bowl.

In his tweet the troller wrote “Please enroll into a cricket academy and learn how to bowl”.

Please enroll into an cricket academy and learn how to bowl

Jayadev Unadkat doesn’t kept mum at this troller who trolled him with an offensive tweet. He immediately responded with a reply tweet shutting not only the troller but everyone who thinks of trolling him.

In his tweet Unadkat wrote “Yes boss, already enrolled into one and will forever be enrolled, till the time I keep playing this game passionately. Because learning never stops. Neither when you fail nor when you succeed. Hope you guys learnt something from hurling abuses to me throughout the season 😁🤘🏼”

Yes boss, already enrolled into one and will forever be enrolled, till the time I keep playing this game passionately. Because learning never stops. Neither when you fail nor when you succeed. Hope you guys learnt something from hurling abuses to me throughout the season 😁🤘🏼 https://t.co/6qfCZAa4b0

After picking up just 10 wickets in 11 games at an economy rate of 10.66, there is a high possibility that Jaydev Unadkat might be released into the auction next year. RR might have seen enough of him in 2018 and 2019. Another user in reply said that it is not an abuse. Fans are frustrated with his below par performance. Unadkat replied to it as well :

Yes I can definitely make out what is abusing and what isn’t 😊 And I know what they are frustrated for and what I am supposed to do. Thanks! 👍🏼

What do you think on these replies of Jayadev Unadkat ?? Comment your views below !!

Madhavan’s Request To Government Regarding Their “Recorded Phone Call Awareness” !!

For past few days, We have been hearing a computer voice creating awareness on how to prevent coronavirus from spreading on every first call...

After watching it at a special screening, Chief minister MK Stalin released a public note lauding Suriya's "Jai Bhim" which is going to release...