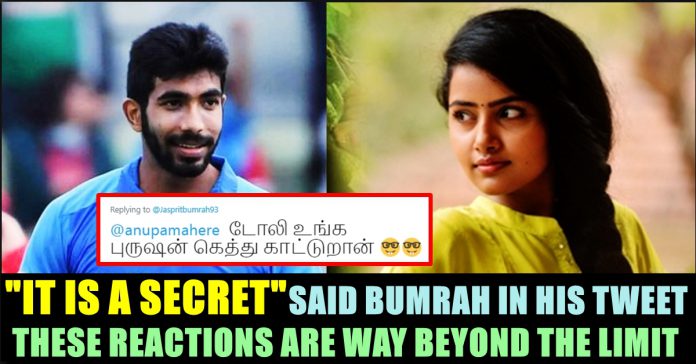 Jasprit Bumrah Denied To Reveal His Thoughts !! These Reactions Are Beyond The Limit !!

Jasprit Bumrah, one of the leading pace bowler for Indian team, rested for the upcoming tour of India to West Indies. He did exceptionally well in the world cup tournament in which India got eliminated in Semi finals. However, the seamer’s character was tested throughout the tournament he didn’t fail to impress the selectors as well as the fans of Indian cricketer. Since the past few days,Bumrah is pretty much active on twitter. Almost for the first time, after the world cup lose, Bumrah has tweeted a post in his official twitter account which is not about cricket. Donning a casual T-shirt, the 25 year old cricketer is seen smiling in the picture.

His caption for the picture read as “My weekend thoughts are strictly a secret .😂😂”

My weekend thoughts are strictly a secret .😂😂 pic.twitter.com/wguJ3Vgr0z

However, this tweet from the cricketer received hilarious reactions from his followers who trolled him by linking up the post with actress Anupama Parameshwaran. Check out some of the reactions here :

ANUPAMA wants to know your location 😝

Sir, I don’t know whether u will read my comment or not but I wanna suggest u one thing about ur personal life. If u like anupama mam then don’t make distance with her just because of media or ur fans. Enjoy ur life the way u want to.

I know Your weekend kerala 😂😂

Yes…., But only anupuma knows the secret 😊

@anupamahere he is taking about you. Have a look😋

This link-up initiated when both Anupama and Bumrah started to follow eachother in social media platforms. Without any evident connection such as region, language or field of career both the celebrities started to follow each other in social media platforms and both of them liking each other’s post caught the attention of the Internet users who started spreading it.

As soon as this news surfaced, many fans from social media started commenting Anupama’s name in the comment section of Bumrah’s posts. Even in the latest post of Anupama people started to comment Bumrah’s achievement in one of the World cup tournament. Did Anupama Just Revealed Her Relationship With Bumrah By Striking This Pose ?? Hilarious Reactions !!

What do you think on these comments surfaced ?? let us know your views !!

Vijay Getting Slammed By Netizens For This Old Film Of Him !!

Netizens calling out familiar personalities for the deeds they committed when there was no social media became common nowadays. Actor Vijay who is known...