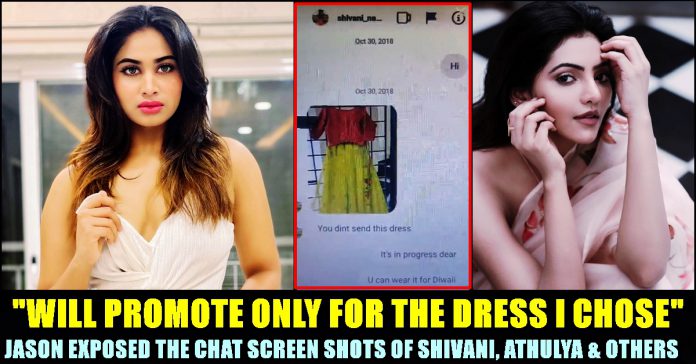 Jason Samuels who has been exposing the social media handles of Tamil female celebrities for allegedly cheating small vendors in the pretext of doing promotion for their brands, in his recent video, slammed Shivani Narayanan for disrespecting brand owners who approached her to do promotion for their products. He also said that actress Athulya has been refunding the money she bought from the brand owners and exposed the chat screen shots of TV actress Mynaa Nandhu, Youtuber Nakshathra Moorthy, Instagram model Diya Krishnan etc. Read : Prominent Female TV Celebrities Accused Of Scamming Small Time Vendors !!

Shivani Narayanan rose to fame among television and Internet audience by appearing in TV serials of Zee Tamil and Vijay Television. She recently appeared in the Kamal Haasan hosting Bigg Boss show as one of the participants and got eliminated before the finale episode. She is currently enjoying 27 lakh plus followers in the photo/video posting social media application and is involved in doing promotions for brands.

Jason samuels who has been exposing celebrities who fail to do promotions from brands after receiving money and products from them, came up with an accusation against Shivani saying that she disrespected a brand owner without mercy.

When a brand owner sent her an attire to make her promote it by uploading a post in her official Instagram account, Shivani reportedly said that she will do promotion only by wearing the cloth she selected. Jason who shows the screen shot of her chat with the brand owner, slammed her for behaving in a rude manner to the business owner. The screen shot Jason shows in the live, shows that the incident happened in 2018.

“Just because people are following you, you are acting arrogant right ?? I am getting upset with these brand owners who are pleasing them to upload a post. One should have self respect and these kind of problems won’t take place if one acts with self respect.” Jason said. “However, these brand owners couldn’t raise voice as celebrities like Diya Krishna would threaten them to report their account by showing their followers count” he added.

In his live, Jason Samuels also slammed Nakshathra Moorthy, Suja Varunee, Myna Nandhu, Neelima and others. “Released the scam and refund by Athulya Ravi, Neelima isai, and the real rude face of Shivani Narayanan and brought out the faces and deeds of Nakshathra Murthy with her symbolic arm pose.” read the caption of Jason for the post he uploaded.

Ulaganaayagan Kamal haasan, in one of the promotional interviews on "Vikram", mentioned actor Vijay as "Thalapathy Ayya" and many believed that the actor said...