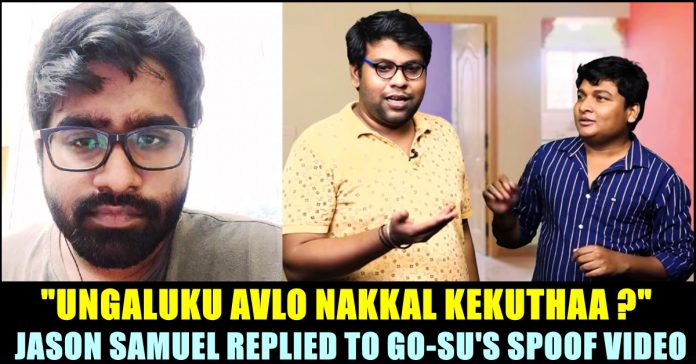 Jason Samuel who accused Gopi and Sudhakar of cheating money through a crowd funding app named “Fundmelon” by uploading a 2 hour 30 minutes long video in his youtube channel, accused the duo again after seeing their clarification video and a spoof they made trolling him. Releasing a 38 minute long video, Jason alleged that the money Gopi and Sudhakar mentioned as funded for their film from their subscribers is a complete lie. He questioned why the organisers of fundmelon created an API with the name of Gopi and Sudhakar.

He went on to add that the entire amount of Rs. 6,39, 66752 which Gopi and Sudhakar mention as the amount collected from their subscribers through the crowd-funding process is fake and said that the total amount sent by the subscribers are just Rs. 1,23, 45189. The Entrepreneur also questioned whether it is some kind of “black” money that belongs to a politician or any other influential personality or it came from cheating people. “This money reached the account without your knowledge ?” Jason questioned Gopi and Sudhakar. He also send the details documents to the Income tax department through a mail during the end of his video.

Days ago, Gopi and Sudhakar, popular youtubers of “Parithabangal” fame, replied to the accusations that were made against them through their recent sketch video. After releasing a 4 minute long video giving clarification regarding the accusations that were made against them, the duo trolled Jason Samuel, an Entrepreneur who brought the matter into the light by releasing a 2 hours and 30 minute long video. Jason, after the release of Gopi-Sudhakar’s sketch video, uploaded a post in his Instagram handle, saying that he will reply to their video and added that it will be the “End”.

Jason Samuel who is known for exposing social media influencers for cheating the money of the start ups and Madan OP for abusing his female subscribers, came up with a video in his you tube channel, reporting about Gopi and Sudhakar. The duo has been accused of promoting Fundmelon Superbacker app in their channel videos which promises that people will get 1% of the money they are investing in daily manner. It has been reported that Gopi and Sudhakar had promoted the app in many of their videos which made people to invest in the app. However, it turned out that the people who invested the money couldn’t get their money back. When questioned, the youtubers reportedly avoided answering the questions of the people who invested money and removed the promotional parts in their videos.

After grabbing the headlines with the clarification video, the duo came up with a spoof of the whole situation to make another reply. In a way of replying to accusations, Gopi said that legal actions are being taken by the Police officials. “I don’t have anything to tell about it further” Gopi says to Sudhakar who in believed to be imitating Jason Samuel in the sketch video.

Now, Jason came up with a reply video in his youtube channel and presented details of people who funded for the initiative of Gopi and Sudhakar. He said that a total of 28,000 people has made the transaction to “Parithabangal” and Rs. 3 lakh was transferred multiple times from an individual named Praveen jayakodi. He concluded saying that a total amount of Rs. 5,16, 35, 416 was credited to “Parithabangal” from a single bank account.

“In my part 1 video, I mentioned about Rs. 70 crore which was cheated from 2000 people by making them pay Rs. 3 lakh 50 thousand each” said Jason and questioned about the multiple transactions of Rs. 3 lakh to “Parithabangal”. “Is this the money that got cheated from unemployed youths ?? or is this the black money of some influential politician ? Didn’t you about all these Go-Su ?? How come these much money reached your account without your knowledge ?” Jason questioned and concluded that only Rs. 1 crore and 23 lakh plus money plus belongs to public among the total amount of Rs. 6 crore plus.

Replying to the clarification video of Gop and Sudhakar, Jason said that people who lost lives and people who got divorced are boiling in extreme angst. He also provided the details to public by sharing the link in the video description. “I got these information from your employees. You revealed about the money that actually got collected from crowd funding to your film crew, ain’t you ? I am ready to release the audio of those who revealed about it if you deny it. Jason concluded his video by sending a mail to the mail id of Income tax department.

Pan Indian actor Madhavan who is known among Tamil cinema audience for his appearance in films like "Alaipaayuthe", "Vikram Vedha", "Irudhi Suttru", replied...