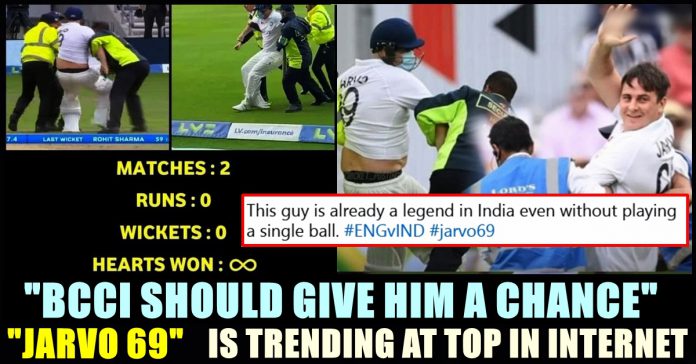 The 99 runs partnership between Chateshway Pujara and Indian Captain Virat Kohli gave some hopes to the fans of Indian cricket team about the ongoing third test match. Rohit Sharma who opened the second and last innings of India with KL Rahul, scored a well made half century but unfortunately got out through LBW due to the umpire’ s call. While he was walking back to the pavilion, instead of Chateshwar Pujara, a man with different physique entered the field by padding up. Rohit crossed him casually by putting his heads down and the person who was identified as Jarvo aka Daniel Jarvis, a prankster, started taking stance to bat.

However, before it was too late, security guards identified him and entered the field to keep him away from the match. This is not the first time Jarvo is involving in such activity as he is known as a serial offender of cricket matches that are taking place in England. Earlier, he entered the ground to field for the Indian cricket team and now, on the day 3 of Headingley test, he decided to come out as a batsman.

JARVO 69 IS BACK AND READY TO BAT.

Though he acted as a headache to the management of the cricket game and for some players, fans enjoyed his presence thoroughly which is evident through the Twitter trending of “Jarvo69” hashtag. Enormous number of reactions kept pouring for the entry of Jarvo. “Seriously, Love this Jarvo guy.
Keep doing this in Next Two Tests too. Done with Bowl and Bat ,next enter as Umpire” a fn said in his tweet with many others treating him as a player of team India.

How can someone do like this with our Batsman

This guy is already a legend in India even without playing a single ball. #ENGvIND #jarvo69pic.twitter.com/kKpqTCsgrT

This dude is aliving legend, just found out that he also dove in a olympic pool🤣 years ago. I want a life like him #jarvo69 pic.twitter.com/W9dXY3Hbve

The Greatest Batsman of All Time , came out to Bat, on no.4 for India…!!

The only player who save this test match against England named Jarvo 😁
Congratulations India#Kohli #England #GOAT #pujji #jarvo69 #pujara pic.twitter.com/KHzq3Kzy9f

We want justice for JAARVO69 . Played 2 matches with 0 ball and 0 runs. Please give at least one chance to him🙈🙈🙈🙈🙈 @BCCI @englandcricket @ICC @ECB_cricket @imVkohli @ImRo45 @virendersehwag @cricketaakash @ashwinravi99 pic.twitter.com/FHMaF34qSp