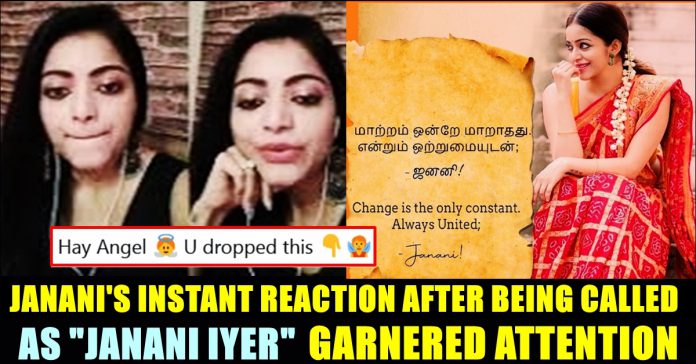 After chmanging her social media handle names of Twitter and Instagram from “Janani Iyer” to “Janani here”, the actress, on Saturday, corrected a media portal which mentioned her as “Janani Iyer” in its piece about her tweets regarding the assault on doctors. Stretching her supportive hand to the doctors after the brutal assaults against them were made against in various parts of the country, Janani tweeted writing “Beat COVID.Not Doctors. #StopViolenceAgainstDoctors”

Mentioning about the tweet of her, a website of “Makers India”, made a piece mentioning Janani as Janani “Iyer”.

Quoting the tweet of them, Janani uploaded a tweet saying that it is “Janani”, not “Janani Iyer” by adding a “smile” emoji. Here’s the tweet she made :

Many of her 1 million twitter users appreciated her for the suggestion made to the portal. “So proud to be a fan of you! Please give an explanation of why you changed your name, so that others would understand.” a twitter user replied whereas another lauded her comparing her to an Angel.

Hay Angel 👼 U dropped this 👇🧚 pic.twitter.com/Jr9JijINIb

Appreciations and kudos too for removing the caste surname 👌👌👏👏👏

So proud to be a fan of you! Please give an explanation of why you changed your name, so that others would understand.

Recently, Janani impressed her social media followers and many others by making a decision on removing her surname “Iyer”. The actress who was widely known as “Janani Iyer” among the fans of Tamil cinema and her colleagues, changed her twitter handle name into “Janani here” and said “Be the change you want to see” in her caption. The twitter post garnered huge reception from Internet users which is evident through the number of likes, shares and the kind of comments it received.

She who is pretty much active in social media platforms with huge sum of followers, changed her handle names from Janani Iyer to Janani “here”. This gesture of the actress impressed hundreds of social media users as a result of which they are lauding Janani for her progressive thinking. While many of us debating over the existence of casteism in our society and looking for ways to abort caste discrimination, Janani went one step ahead and practically proved that she wants to be a part of a society that values human being for their acts, attributes and behaviours not based on birth.

After starting her career as a model, Janani appeared as an actress in over 150 regional television advertisements. She debuted to Tamil film industry as a main lead actress through ace filmmaker Bala’s “Avan Ivan”. In the film, she did a role of a police constable and paired with actor Vishal. She gained widespread acclaim after pairing up with Ashok Selvan in “Thegidi”. The way she performed in the montage shots of “Vinmeen Vidhayil” song gained her a separate fan base. She is expected to appear in many more films post lockdown.