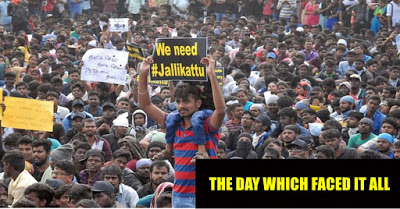 The protest against the ban on the famous Tamil culture- Jallikattu has finally reached a pause. We may not describe it an end as it may be provoked again in the failure of the center to enact a permanent ordinance.

The protests reached a vital stage when after a temporary ordinance was passed, the Chief Minister who decided to inaugurate the ceremony at Alanganallur was chased from the premises. The organizers over there ceased to commence the Jallikattu event owing to voices raised from the public who along with the organizers wanted a permanent solution to this. Thus then protest went on even after a temporary ordinance.

The expected permanent ordinance was to be issued yesterday (January 23rd) around evening and the protest was expected to be dissolved by then. But unknowingly, the police had other ideas planning. Huge loads of Cops were dumped into the beach to face the already thinning crowd. The initial talks as said by the police which ended up in failure gave raise to a mayhem inside the beach.

The revolt which eventually turned into a riot later experience mass gatherings at various parts of the city. Public belongings were harmed, properties damaged, people hurt and Chennai also witnessed the other face of many a societies Videos and photos which included police personalities doing inhumane things made us think for a moment are they real policemen?

It all started around early morning, 6 AM when heaps of police surrounded hapless citizens who were planning to withdraw around the evenings. The initial assault came in the form of the police dragging citizens out of the beach which eventually turned violent when more police joined the scene. The people were eventually forced deep into the beach and eventually the food and water supply were cut off. Volunteers were not allowed inside the beach. This was comprehended with the help of the local fishermen, who helped the citizen through water, a help that’d forever be appreciated. It’s from this point, the revolt was converted into a riot by god knows who.

By the afternoon, things started getting chaotic as the riot started getting out of control. The move by the police were constantly agitating people. They decided to pick on innocent public and many of their actions were unfathomable. They were constantly abusing women and children, including a pregnant lady by whom report says her fetus was aborted due to that incident.

The afternoon also faced a teared and sentimental Raghava Lawrence facing the press with a volley of questions thrown at him. Eventually he concluded that the problems around the city were not student doings, and someone with some ulterior motive is behind all these mayhem. He also vowed that once the ordinance is passed, the students would withdraw from the protest.

The evenings witnessed riots happening across the entire city, both the unknown mob and some black marks inside the police department took use of the hapless situation. Tons a public property was damaged and we witnessed even the police department committing crimes. The evening also witnessed the ex-high court Judge Justice Hari Paranthaman explaining the gathering about the victory and asking them to dissolve in vain, which after the happenings of the day was never heard by the protesters.

By the evening, the ordinance was passed by the State Government and is expected to get official by tomorrow. Though the happenings stand out as a huge victory for us, we are still petrified and agitated by the sudden ruthless assaults of the police. What should have been a clean and normal Marina by today (Jan-24th) is now getting ready to hold another bunch of people, ones who are clearly motivated to rise against the policemen. Chennai is getting ready for another protest, and this time only God knows where it’d end up.