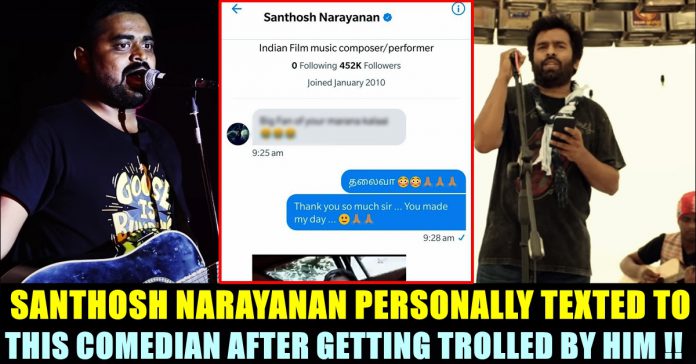 Months ago, an indirect tweet of music director Hip Hop Tamizha, referring to a group of stand of comedians created a controversy. Now, Jagan Krishnan, one of the comedians of the group has conducted a new show and released the video of it in his youtube channel. In the show which was titled as “Husky voice, Alphabet song and Neruppu da”, Jagan krishnan trolled almost all the top musicians of Tamil film industry. To our surprise, seasoned musician Santhosh Narayanan messaged him personally and the screen shot of his messages are going viral in the micro blogging social media site.

Jagan Krishnan rose to fame after trolling ace music director Harris Jayaraj and the last show he conducted “Acadummy Award” became a huge hit as well. Now, through his recent episode, Jagan trolled music directors and singers such as G.V Prakash, his wife Saindhavi, Yuvan Shankar Raja, Santhosh Narayanan and Arunraja Kumararaja. He trolled Saindhavi for singing most of her songs in “husky voice”.

Trolling Yuvan Shankar Raja, Jagan Krishnan said that he makes everything sound sexy through his voice. He even imitated the singer and sung a song on stage only to leave the entire auditorium in splits. Further he trolled music director and singer Santhosh Narayanan by saying that he sings his songs without much interest.

He also imitated the singer’s “Neruppu da Nerungu da paapom” from Kabali, a song from Karthik Subbaraj’s “Iraivi” and many others. The video garnered huge reception and is going viral in social media platforms and even gained the attention of Santhosh Narayanan himself. The musician, instead of losing his nerves or writing indirect tweets attacking him, took it in a light manner and said that he is a big fan of the comedian’s “Marana Kalaai”.

He searched the twitter account of Jagan Krishnan and sent “Big fan of your Marana Kalaai” by adding laughing emojis to his message. When Jagan replied to him saying that he made his day, Santhosh Narayanan replied with a GIF of “Kabaali” Rajinikanth.

Check out the screen shots of the messages send by Santhosh Narayanan to Jagan Krishnan :

This reply from the “Karnan” musician won hearts of the Internet users for the way he took it. In the “acadummy award” show, Jagan Krishnan, in the award category named as “Oh Maha Seeya Award For Best Lyrics”, gave the first place to the songs of Hip Hop Aadhi’s “Natpe Thunai”. In his show, the stand up comedian said that Hip Hop Aadhi haven’t worked for the lyrics at all instead he adapted them from other songs and films. He compared the lyrics of “Aathadi enna odambi” song with the performance of Ramar in Vijay TV, “Vengae Mavan” with Kaala and a romantic song with a popular comedy scene of Vivekh in “Budget Padmanaban” movie.

As soon as the video released, a tweet from the official account of Hip Hop tamizha surfaced indirectly slamming the comedian. “The money and fame you make out of mocking someone’s work will not last long. While kneeling down in front of someone to make a life out of it, not only your knee will get damaged but there are chances for it to break permanently if your time is not good” Hip Hop Aadhi said in his tweet.

As soon as the reports on Bollywood Superstar Akshay Kumar remaking Tamil blockbuster "Ratchasan" surfaced in Internet, fans started trolling the 2.0 actor and...

Chepauk-Thiruvallikeni MLA Udhayanithi Stalin who introduced a robotic sewer cleaner in his constituency for the first time in state Tamil nadu, is busy shooting...