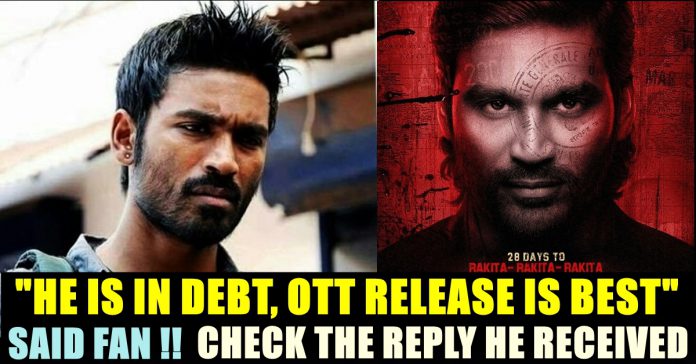 With the emergence of social media platforms, unlike before, high profile politicians including Chief minister of a state and other influential personalities such as cinema stars, police officials became interactive with the common online using people. As far as cinema updates are concerned, back then, we have to buy a magazine or newspaper to know about the status of a movie. But now, as social media became accessible to everyone, fans of the cinema celebrities are simply tagging whomsoever they want and demanding updates from them. Film personalities were also required to conduct a press meet to “clear air” on rumours and speculations but now a simple tweet reaches people sooner than they expect.

Since the lockdown got implemented, after so many struggles, two mainstream tamil films managed to release in OTT platforms and many more films are expected to stream in the online platforms as there is no sign regarding theatre release due to increasing COVID 19 crisis. Followed by “Ponmagal Vanthaal” and “Penguin”, “Soorarai Pottru” and even “Master” were speculated to release in online platforms. However, makers of it firmly denied it and confirmed that the films will release only on big screens.

Now, Dhanush-Karthik Subbaraj’s most expected “Jagame Thanthiram” is rumoured to release in OTT platforms due to the extending lockdown. Producer Sashi Kanth who is known for producing successful films such as Tamizh Padam, Kaaviya Thalaivan, Irudhi Suttru, Vikram Vedha through his Y not studios, has bankrolled this film as well. The film producer confirmed that the film is not going to stream in OTT platform while replying to one of a twitter user.

The twitter user said that Sashikanth is having some debts and releasing the film in OTT is the only way to clear his debts through his tweet. “Producer of this movie is having some debts if this debts have to be cleared OTT release is the best decision But Dhanush fans never agree this but they have to understand producer’s situation too” the fan wrote in his tweet.

Sashi kanth who saw the tweet, in a lighter not asked, “Why are you making the producer as a Borrower for the sake of your tweet?” through his tweet directly. “Yaemppa …. unnoda tweetukku producera kadanaaliyaakkara ??” read his tweet.

Replying to this tweet of Sashi, the online user asked apology and said that he tweeted only what he saw in media portals. Sashi asked him to be cool and said “no problem”

However, as the producer is yet to make an official announcement regarding the denial, fans are still speculating the film to get an online release.

Previous articleCheck How “Nadhaswaram” Sruthi Gave Back To This 2k Kid !!
Next articlePost Mortem Report Of Jayaraj & Fenix !! – Suchi Tweets

“I Didn’t Sleep For Two, Three Days” – Bharath On Missing This Film !! WATCH

Actor Bharath who is known among Tamil audience for acting in quality films such as "Kaadhal", "Kanden Kadhalai", "Pattiyal", "Veyil" is all set to...