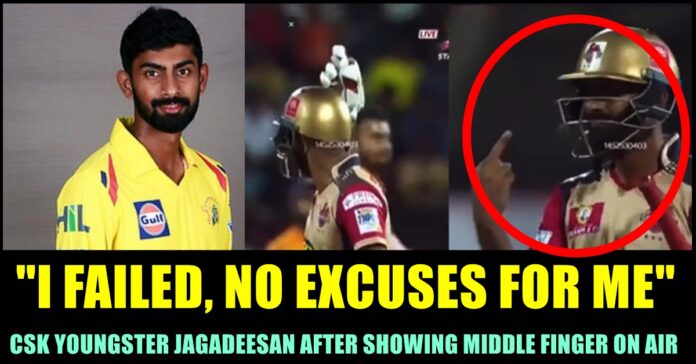 Young cricketer Jagadeesan who caught into controversy after showing middle finger to his senior baba Aparajith in the yesterday’s match, came up with a press note expressing his apologies to the public for his insensitive behaviour. The CSK batsman said that passion is always a key to any sport and added that channelizing and controlling is it in the right way is important. Expressing his deepest regret, Jagadessan said that there is no excuses for what he has done and assured to do better.

Most lately, a video of CSK’s Jagadeesan who is currently playin in the TNPL showing middle finger to his senior player Baba Aparajith is trending social media platforms with fans expressing their displeasure over the cricketer’s gesture. Jagadeesan lost his cool after getting out through “Mankad” method. The cricketer deliberately displayed the obscene gesture several times, especially in a way of registering it in the camera.

During the opening game between the Chepauk Super Gillies and Nellai Royal Kings in the Tamil nadu Premier league which took place in Thirunelveli on Thursday. Jagadeesan of CSK fame opened the innings for CG along with skipper Kaushik Gandhi while the team was chasing a mammoth score of 185.

Baba Aparajith who was bowling, dislodged the bails before bowling the delivery as he seen Jagadeesan who was in the non-strikers end, getting out of his crease. Without waiting for the replays, Jagadeesan immediately left the field, fuming at the way he was dismissed. Before returning to the pavilion, the batter turned around twice and showed his middle finger, once with his gloves on and other time with bare hands.

While getting out Jagadeesan was on 25 off 15 with four boundaries. The team was at 53 in 3.4 overs when he got out through “mankad” method. Here’s the video that is going viral in social media platforms :

Many reaction surfaced slamming the cricketer for his gesture towards his senior as a result of which he was forced to release a press note expressing his regret.

“My deepest apologies to all of you for my inexcusable behaviour at yesterday’s match. Cricket has always been what I live for – and the sportsmanship that comes along with the sport is something I deeply respect. Which is why it is very hard for me to digest how I reacted” said Jagadeesan through his tweet.

“Passion is always key in any sport- but controlling it and channelising it the right way is more important. And that is something I failed at doing when I let my temper get the better of me. No excuses for what has been done. I will do better and be better. With Regret, Jagadeesan” he added.

Previous articleOTTO Stores Reacted To The “Varisu” Poster Troll !!
Next articleMalavika’s Reply To A Follower Who Asked Her Bikini Picture Is Trending !!

Video Of Superstar Rajinikanth Went Viral !! Fans Are Not Happy For This Reason !!

Rajinikanth's Petta is having its dream run in the box office. Directed by Karthick Subbaraj, the film has bollywood superstar Nawazudding Siddiqui, Kollywood emerging...

In a tragic incident, a 17-year-old girl, upset over failing the NEET exams, committed suicide by consuming rat poison at Ginjee in Villupuram district...