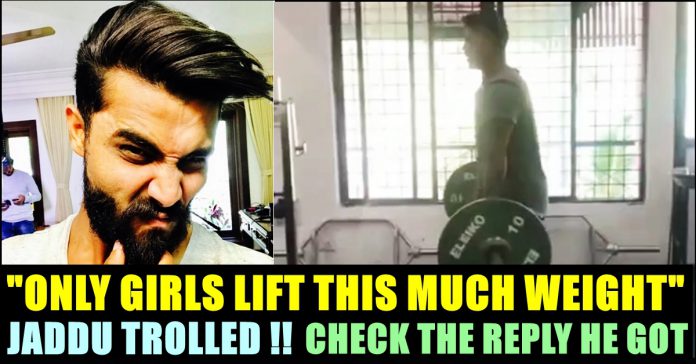 Ravindra Jadeja is one of the most prominent all rounders of Indian cricket team. His fight in the semi finals of 2019’s world cup gained him a massive respect and the cricketer is having a good time since then. Being the only cricketer to be called as “Sir” by the netizens, is very much busy in online platforms, especially in Instagram. He enjoys more than 14 lakh followers in Instagram .

The 31 years old cricketer who is perfectly fit, 3 days ago trolled Umesh Yadav in his official Instagram account for posting a weight lifting video. Umesh who is not a part of the current team, was seen lifting weight bars effortlessly. Uploading the video, Umesh who has 15 lakh followers wrote “#doyouliftbro”

On seeing this post, Jadeja rushed to troll the pace bowler in front of his own followers. He wrote “Ladkiya itna weight uthati hai😏” (Girls Lift This Much Weight)

To this tweet, Umesh replied by saying “Yeh toh sirf teaser tha, Picture abhi baaki hai mere dost” 😉” (Dear friend, This is just a teaser, The main film is yet to come)

Jadeja is also one of the finest cricketer of Chennai Super Kings, one of the most loved team in Indian premier league. Jadeja became the first Indian left-arm spinner to take 150 One Day International wickets, when he dismissed Sam Billings at Eden Gardens, Kolkata.

Earlier this year, during the world cup tournament, commentator and former cricketer Sanjay Manjrekar criticized Jadeja by saying that he is a bits and pieces cricketer. “I am not a big fan of bits and pieces players which Jadeja is at this point of his career in 50-over cricket. In Test matches, he is a pure bowler. But in 50-over cricket, I would rather have a batsman and a spinner,” Manjrekar had said.

Replying to him, Jadeja posted a tweet saying “Still i have played twice the number of matches you have played and i m still playing. Learn to respect ppl who have achieved.i have heard enough of your verbal diarrhoea.” by tagging Sanjay’s official account.

Hashtag “Boycott VijayTV” Is Trending In Internet Platforms!! Check Why

Ever since the announcement on Azeem winning the Bigg Boss title surfaced, various kind of hashtags regarding the same are trending in the micro...