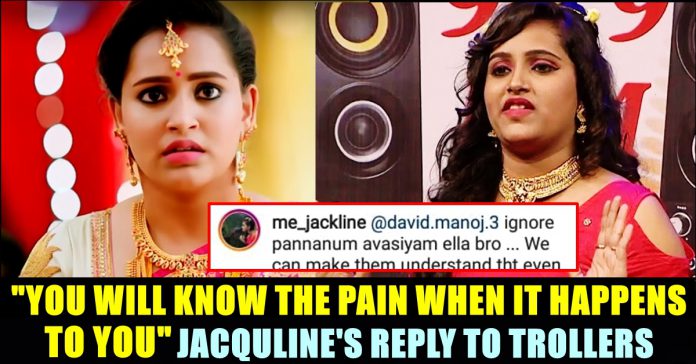 Jacquline’s Sharp Reply To Those Who Trolled Her Voice !!

Vijay TV fame Jacquline who never shied away from giving back to trolls and abuses, now came up with a strong reply to those who trolled her voice. The serial actress said that her voice was provided to her by her father and mother and made it sure that she would embrace it, no matter what. Through an Instagram post, Jacquline asked the trollers to make fun of her voice however they want and said that she will always be in a higher position than they think.

Female celebrities who are associated with cinema and TV industry getting subjected to online mockery based on their dress, appearance, voice and makeovers is not something new in this internet era. They are easily targeted by online offenders who would throw shades at them for their temporary happiness. A number of such people mocked popular TV anchor Jacqueline for her voice only to get a befitting reply from her.

As every other TV stars, Jacqueline is also pretty much active in social media platforms, especially in Instagram amidst this lockdown situation. The 24 year old actress is currently enjoying 7 lakh plus followers for her Instagram account. In her most recent post, she came up with a statement slamming the people who making fun of her voice.

“Do or Don’t comment about my voice, It’s from my Mom and Dad. I love it, if you don’t like it don’t bother about it. Talk whatever you want, make fun however you like, I know about me, will be higher than you think” she wrote in her Instagram post to shut them down once and for all.

“Look at you before u see others 😂👍” her caption to the post read.

Look at you before u see others 😂👍

On seeing this post, a follower of her asked her not to get too emotional. He also asked her to ignore negativity to which the Jacquline replied by saying that he will know the pain only if he gets body shamed like her. “I don’t have to ignore it, We can make them understand that even it can happen to their loved once, so they can understand how painful it is” she replied to her fans.

Earlier, when a number of male followers trolled her by commenting “Nippon Paint” indirectly denoting the amount of make up she applied for her face before posing for the picture. Frustrated with such comments, to one of an Instagram user, the Vijay TV anchor replied uploading an Instagram story writing ““Without makeup, For those who brand for Nippon paint in my comments, And yes I do makeup and love make up, it is also part of my work”