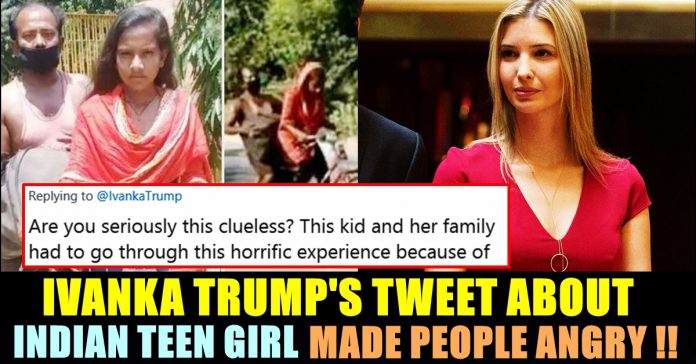 Migrant workers across country India are suffering in big time due to lockdown implemented by the Prime minister which lasts more than 60 days. Protests and negotiations to make them reach their home safely is taking place in daily basis but there is no appropriate solution so far. A 47 year old migrant worker named as Anil Shankar collapsed and died due to sun stroke in Atkuru of Andhra Pradesh. He along with 17 other migrant workers are on their way back home on foot from Chennai.

Earlier, Sixteen migrant labourers were crushed to death by a goods train in Maharashtra after they fell asleep on the tracks. The accident happened between Jalna and Aurangabad in the Nanded Division of South Central Railway in Karmad police station area of the Aurangabad district. Many other deaths and injuries are taking place as migrant workers are trying to reach their home on foot due to the non-cooperation of the government.

Meanwhile, Ivanka Trump, daughter of US president Donald Trump and also the senior white house adviser, On Friday praised a 15 year old Indian girl, who had pedaled 1,200 km in seven days from Haryana’s Gurgaon to her native village in Bihar, carrying her ailing father on the rear seat of her bicycle during the national lockdown.

Jyoti’s father, Mohan Paswan, an auto rickshaw driver in Gurgaon got injured and the lockdown left him without any source of income. He was forced to return the auto rickshaw to the owner. The father and daughter duo started their journey gurgaon on May 10 after buying a bicycle with whatever money they had. They reached their village on 16th of May.

Praising this courage of the girl. Ivanka Trump, in her official twitter account wrote “15 yr old Jyoti Kumari, carried her wounded father to their home village on the back of her bicycle covering +1,200 km over 7 days. This beautiful feat of endurance & love has captured the imagination of the Indian people and the cycling federation!”

15 yr old Jyoti Kumari, carried her wounded father to their home village on the back of her bicycle covering +1,200 km over 7 days.

This beautiful feat of endurance & love has captured the imagination of the Indian people and the cycling federation!🇮🇳 https://t.co/uOgXkHzBPz

However, this tweet from Ivanka left many Indian online users disappointed as it was not about the 15 year old becoming a cyclist but about the ill-conceived total lockdown implemented by country India. “Its shameful to celebrate someone’s state sponsored misery and plight. But what else can be expected from The Trumps of this world..” wrote one of a twitter user.

Modi and Trump have similarities in their mindset… !

Rich must stop romanticising the poor.

May be you should try this “beautiful feat of endurance” if you found it so beautiful and liked it so much.
The 15 yr old Jyoti didn’t had any choice to reach her own home, that’s why she did it. She was helpless. She didn’t did it for fun. #Ivankatrump https://t.co/GtsZkP8uep

And this Stupid ,connect the dots finally and says it is "BEAUTIFUL" #IvankaTrump https://t.co/ZB8TtC5Ku4

#HRaja admin than #IvankaTrump twitter handle ah maintain panraan pola.. So the next story will be Thousands of Migrant workers are walking in the roads to strengthen their immune system to fight against Corona? #BunchOfJokers https://t.co/vY4RKf2a2i

Cycling over 1200+ km with wounded father isn't beautiful #IvankaTrump.
If you find any beautiful in this,you can try this with trump https://t.co/F7uSUyqBdn

I am sure #IvankaTrump has never eperienced such a beautiful feat of endurance, So we #Indians request you to try this adventure for once in this #COVIDー19 period as the roads are also vacant , Good Idea?

Its shameful to celebrate someone's state sponsored misery and plight

But what else can be expected from The Trumps of this world..