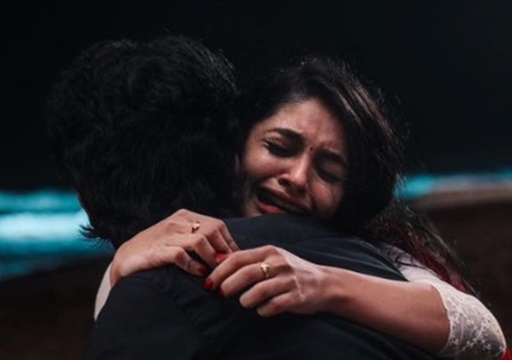 Actress Ivana of “Love Today” fame opened about how she processed the “morph” scene in the climax of her recently released film after she was informed by director Pradeep that there will be a scene like that. The actress said that she had a thought initially about how audience would receive it and added that she discussed with her family first. Ivana also talked about how women should react while such bad things happens to them.

“Love Today” starring Pradeep Ranganathan and Ivana got released in theatres recently and is running successfully among the audience of Tamil nadu. Along with the lead stars, Yogi Babu, Sathyaraj, Radhika Sarathkumar, Raveena and many youtube stars were included in the cast list. Produced by AGS, the film impressed it’s target audience and is receiving positive reception from fans and from the critics.

Apart from the film’s engaging screenplay and relatable content, performance of the artists were also got highly appreciated by the audience and critics. In one of her recent interviews to a YouTube channel, actress Ivana opened on how she accepted to do the climax scene where she was supposed to seen in a obscene “morph” video.

“When I came to know such scene is going to take place in the movie, I was not nervous but quite confused about how audience would receive it. I discussed with my family first. They said that it is not looking odd as cinema requires such things as a story would demand it. Seeing the whole movie, that scene was needed for the film as well” Ivana said in the interview.

“Few people asked me whether I thought about the scene going in a wrong way but I never had such thoughts. My family accepted it as such scene was needed for the script” She further said and went on to add how women are suffering due to such miscreants.

“It had happened to many women. Nikitha was lucky enough to have Uthaman Pradeep in her life. There is no need for an Uthaman Pradeep in our lives as well. To all those women who went through such trauma, I want to say that we are not the one who committed a crime. The one who made the crime should hide his face. We shouldn’t hide at all. Only if we voice out, we could prove that he is the one who made the mistake. If we fail to do that, they would go free without guild” Ivana said and asked people to love themselves first.

After the success in Tamil, the film is now being screened for the audience of Telugu language and has exceeded the expectation in that region as well. On Thursday, the film got released in Netflix as well.