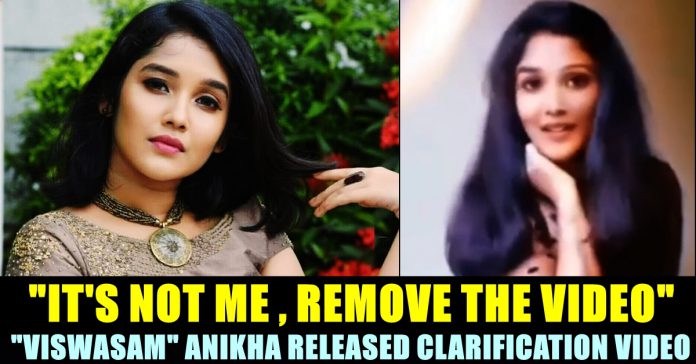 Anikha Surendran, a child artist who appeared in a number of Tamil films, released a clarification video addressing about a viral fake video which showed morphed image of herself dancing for a song. She who is known among Tamil cinema audience for acting as a daughter of Ajith and Nayanthara in “Viswasam” film, is pretty much active in Instagram and is currently enjoying 12 lakh plus followers in the photo posting social media application. In the video, the 16 year old actress could be seen clearing the air about the fake video and also requests people to report the youtube channels which are spreading it.

The fake video which went viral across the social media platforms, had a girl dancing for a song by wearing revealing clothes with Anikha’s face morphed in it. Clarifying about the inappropriate video, Anikha said that she has been receiving the video from many people and confirmed that it was not her.

“To be honest, it’s bothering me a little bit.” said Anikha and named out the youtube channels which are spreading her morphed video. “I don’t know what to say about it to be honest. As I said it is a morphed video and it is done very well. While seeing it, even I got shocked. Actions are being taken to take the video down from online because it’s obviously not a very nice thing to see” she could be seen saying in the video.

On the work front, Anikha Surendran who is also known as “Baby Anikha was last seen in a web series named “Queen” and she appeared in it as the younger version of former chief minister J. Jayalalitha and is going to be featured in Vijay Sethu Sethupathi’s “Maamanithan”. Apart from appearing in films, Anikha is also known for participating in different kind of concept photo shoots.

With her unique attires and International level makeovers, The actress is competing with the top heroines of Indian film industry as far as Instagram modelling is concerned. The 16 year old actress is expected to play lead in near future and her looks is already being compared with the looks of “Lady Superstar” Nayanthara.

On seeing the CCTV footage that surfaced on Wednesday showing a group of people, presumably the teachers and wardens, carrying Srimathi from the spot...

Video jockey Parvathy who is pretty much interactive with her followers in social media platforms, often compared with former adult star Mia Khalifa for...