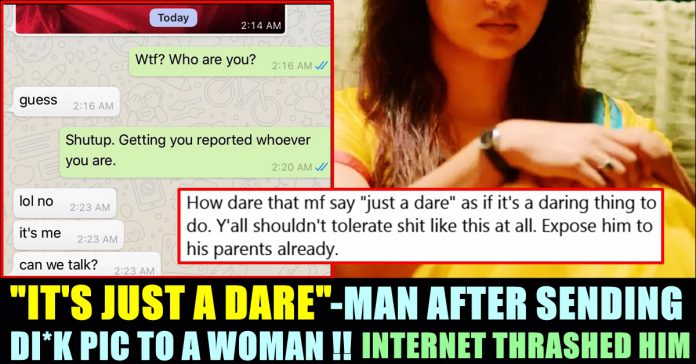 Female online users, especially those who are associated with media industry are being subjected to online harassment since the emergence of the digital world. Men and women across the social media platforms are protesting day in and day out against online harassment. However, the number of miscreants who find pleasure in sending inappropriate texts to women seems to have increasing in daily manner. Now, a journalist named Damini Srivasthava went through such trauma and unlike many women, she brought the matter to the light and caused a debate in the micro blogging social media site.

Women are regularly subject to online rape threats, online harassment, cyber stalking, blackmail, and more. As the internet becomes an increasingly important part of human existence and a critical space for marginalized populations to make their voices heard, a woman’s inability to feel safe online is an impediment to her freedom, as well as to her basic human rights. Yet the problem of online violence and harassment is often overlooked in discussions of violence against women.

Damini Shrivasthava whose bio says that she is an editor in a media portal, captured the screen shots of the messages she received from a guy and vented out her emotions of how she felt while interacting with him in Whatsapp. The guy who seems to be a stranger, sent the picture of a penis to Damini and asked her to guess who he is.

When she was about to report him, the man in the other end pretends to be a known person of the victim and could be seen buying time from her to prevent himself getting blocked or reported. Later, he says that it is “just” a dare and wants Damini not to be mad at him.

Check out the screen shots shared by the journalist :

Sharing these screen shots, Damini shared what she felt while interacting with him by writing “Men really don’t understand the horror/trauma one goes through because of this gratuitous behaviour, do they?” as her caption.

Men really don’t understand the horror/trauma one goes through because of this gratuitous behaviour, do they? pic.twitter.com/bSVaJC5IAc

This tweet went viral among the users of Twitter who are slamming the person who sent such insensitive messages. Damini confirmed that she has filed a police complaint against the person as she wants him to realize that what he did is not Okay.

Yes, I did. He needs to know this is NOT OKAY

She also confirmed that he is a complete stranger to her and his mobile number looked like it’s from US.

I did. Right after I blocked. Some US number. No idea who/what/why does he have my number.

“This is illegal under both the IPC and the IT act. You can threaten legal action next time if that makes you feel more empowered. Otherwise, as others suggested, block.” suggested a twitter user and many others reacted to get him punished by the law as well.

This is illegal under both the IPC and the IT act. You can threaten legal action next time if that makes you feel more empowered.
Otherwise, as others suggested, block.
Heinous sense of entitlement!!! And ick!

I get so angry at this shit. Earlier a few of my male friends used to try this on phone: "guess who? Three guesses. I know you for a long time" at a time I was getting weird stalkerish calls. I used to simply hang up till they identified themselves

If this was received on whatsapp as it seems by the screenshot, please approach the cops (as intimidating as that seems). Ppl who do this should not be spared.

How dare that mf say "just a dare" as if it's a daring thing to do. Y'all shouldn't tolerate shit like this at all. Expose him to his parents already.

Previous articleHow Many Views “Master” Garnered In Amazon Prime So Far ?? Check Out
Next article“They Failed To Telecast It” Shivani Replied To Her Follower !!

Chennai Man Booked For The Way He Treated A Sanitation Worker !!

For abusing a lorry driver who works in sanitary department, a man named as Chandrasekar has been booked under Indian Penal Code section 294...