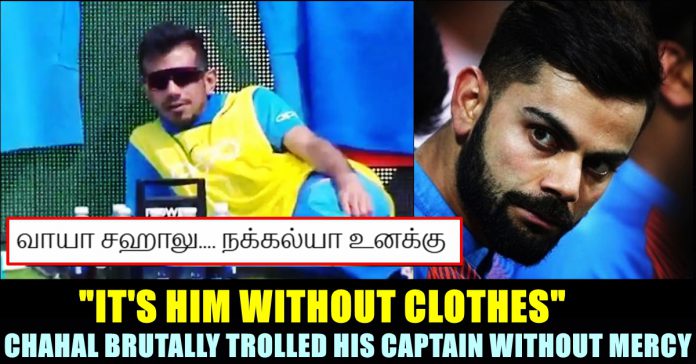 “It’s Him Without Clothes” Chahal’s Tweet About Kohli Made Fans Go ROFL !!

Yuzvendra Chahal’s reply tweet to a post of Royal Challengers Bangalore’s official twitter account, made netizens to laugh out louder. The team which has 3.5 Million followers, posted the pictures of Virat Kohli and Lion and asked if the followers could spot any difference, in a way of praising for the way he plays the game of cricket. Replying to that tweet, Chahal commented the difference he witnessed only to make Twitterati to go gaga.

“Spot the differences, because we are not able to.” read the caption of RCB’s post. Check out their post here :

Team Chennai Super Kings which is widely known as a rival of RCB on and off the field, came up with a reply posting a picture of another lion saying “Mum’s been crying all day. Where did you go? What have you done to your hair?!“

*Mum’s been crying all day. Where did you go? What have you done to your hair?!* pic.twitter.com/nXetJMbOOe

However, the reply tweet made by Chahal, prominent player of RCB went viral with wide reach due to the spinner’s witty mindset. He said that Kohli is wearing clothes in the first picture and is posing without clothes in the second picture to troll his captain and post of his team. “Difference hmmm in first pic wearing clothes and in 2nd pic widout clothes “ read his comment which received 20, 000 likes so far, a bit lesser than the likes received by the post.

The cricketer who got engaged with youtuber and choreographer Dhanashree Verma recently, never failed to entertain us in social media and in field as well. Chahal made his One Day International debut against Zimbabwe at Harare Sports Club on 11 June 2016, Richmond Mutumbami was his first wicket in ODIs. He is the second player to get six wicket haul in a T20 cricket. In both IPL and International matches, he plays under Kohli and the duo sharing a very good bond between them.

Check out his engagement posts :

Thank you everyone for all your good wishes and blessings ❤🙏🏻

Check out some of the replies for his reply in RCB’s post :

It is notable that Kohli, in a recent interaction with AB DE Villiers said that Chahal is an “absolute clown” for the way he behaves in his Tik Tok videos. Watch the video here :

Comment your views on this reply made by Chahal now !!

Previous articleWhen Lokesh Kanagaraj Forgot To Edit The Caption That Sent To Him !!
Next articleFinally Suriya Reacted To The Issue Created By Meera Mitun !!

During one of her recent interviews with Galatta youtube Channel, Anjali talked about her acting experience in the industry. The actress revealed that she...

Why “Karnan” Must Be Celebrated ?? Review & Reactions :

The most awaited film of Dhanush and Mari Selvaraj's "Karnan" released in the theatres today and left the fans of Tamil cinema talking about...