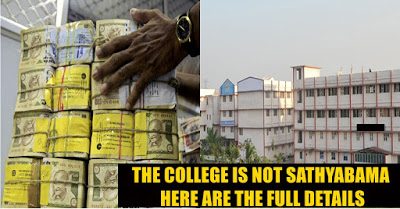 IT Raid At One Of Jeppiar Institutions

Income Tax Raid in a Chennai Based Engineering College ended up with officials seizing around Rs. 8 crore.

This was a purely Chennai-based raid. At first around 2:40 the team seized documents worth Rs. 3.25 crore and then around 4:30 pm 8 crore rupees were seized.

Colleges are known in Tamil Nadu for amassing huge money in form of donations. Main source of black money for the college owners.
Some people knew about demonetization in advance and had opened duplicate accounts, the officials said.
Meanwhile, a source said that I-T department noticed that the bank accounts of the institutes
employees saw a surge in bank balance. Suspecting that the institute was depositing the cash into
their accounts, a way of converting black money into white, the raids were conducted.

A few days ago we got information from some employees of the college saying their bank accounts were used by the college owners to deposit cash. Based on this, we had conducted the searches…The college accounts could not be balanced with the cash deposits. Therefore, it is black money which has been deposited in the employees’ accounts. The employees were told that they would be given some commission and after sometime the money would be taken back.

Senior Income Tax Official
In September, SRM Group Chairman and SRM University Chancellor TR Pachamuthu was arrested
by the Crime Branch of the Chennai Police after more than 100 students said that they had paid
money for obtaining a medical seat in SRM college, but were not admitted.
In June, a massive raid was carried out by Income Tax officials on major colleges in Puducherry and Chennai/
Previous article2.0 First Look.
Next articleINS Chennai Warship- Every Thing You Need To Know