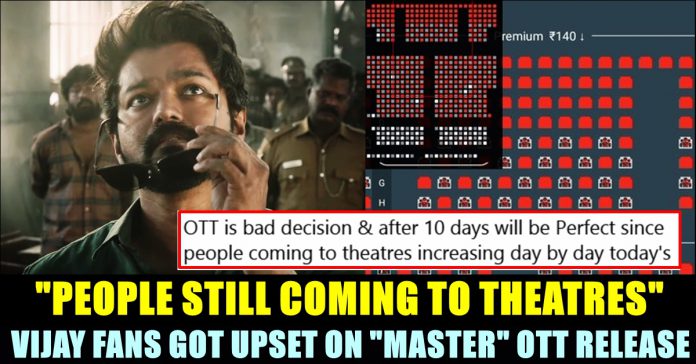 After receiving a massive response from the audience during the Pngal festival, Makers of “Master” decided to release the film on Amazon Prime Video from 29th of January. The film which was directed by Lokesh Kanagaraj, had Vijay, Vijay Sethupathi, Malavika Mohanan, Arjun Das in the lead roles. The report on the film getting released after 16 days of theatrical release has left the ardent fans of actor Vijay in a confused state. However, it has been discovered that the film is getting released sooner due to the audience who are residing in foreign countries as they couldn’t witness the film in theatres due to COVID 19 protocol.

Watch the exclusive trailer made for “Master” OTT release :

Vijay Sethupathi and Lokesh kanagaraj also felt happy as the film is going to reach wider audience with this OTT release. The film is going to release in 240 countries across the world and Vijay Subramaniam, director and head of Amazon Prime video in Master said that “Master” is one of the most anticipated films of the year. “With this digital premiere, we are happy to provide customers with the choice of enjoying the latest Tamil blockbuster movie from the safety and comfort of their homes, not just in India but across the globe,” Vijay subramaniam said in an official statement.

Meanwhile, fans of actor Vijay who wanted their idol’s film to collect huge mount at the box office, felt bad and are expressing their disappointment in social media platforms. Meanwhile, a number of fans felt happy as they are going to watch the film at their comfort.

“OTT is bad decision & after 10 days will be Perfect since people coming to theatres increasing day by day today’s booking. pls wait for some more days” a fan requested whereas another one said “I would prefer Feb 5 OTT release.. Film is done with it’s run majorly elsewhere except TN. TN might pull in another 5-6 Cr in its 3rd weekend which might be impacted partially due to OTT. On the other hand it’s a great option for lakhs of overseas fans who still wait!” another one said.

However, the production house of “Master” confirmed that they are going to release the film considering the audience of Overseas.

#Master 'OTT' Premiere from Jan 29. Get ready Overseas Peoples, those who are Still in Lockdown. #VaathiComing to your home, Get ready to Witness the Rage of 'MASTER' 🔥#MasterFilm @actorvijay

I would prefer Feb 5 OTT release..

Film is done with it's run majorly elsewhere except TN. TN might pull in another 5-6 Cr in its 3rd weekend which might be impacted partially due to OTT.

On the other hand it's a great option for lakhs of overseas fans who still wait!

OTT is bad decision & after 10 days will be Perfect since people coming to theatres increasing day by day today's booking @Lalit_SevenScr @Jagadishbliss pls wait for some more days 🙏#Master pic.twitter.com/iqliii3ZoO

#Master has achieved break even in TN. Theatres are making a profit. But it doesn't END here! Master has been bringing audience back to cinemas for the survival of industry. Its NOT over yet. Its gonna to do it at least until Feb. This ultra-early OTT release comes as a dampener.

I m happy for the Ott release bt 29th January is really too early, they can atleast release it after 1 month of theatrical run🙃#Master

Chill guys this 'OTT' Release won't affect Theatres.. Theatres those who Released #Master is already on Profit Zone.. Ott la paakanumnu nenachavunga ellam already Theatre la pathutanga.. Family audiences crowd will come for Sure even after Jan 29.. Only for the Brand #Vijay !!

With twitter as my witness I swear to watch Master when it comes out on OTT. Need to watch a Vijay film to immerse myself in the culture of my land. How long will I live like an expatriate.

There will be mixed opinions for #Master OTT release…

But we shud be gratefull to #Master team for releasing in theatres n making fans n trade happy..

Every one shud be happy 👍👍

Comment your views on “Master” getting released in OTT on January 29 !!

Lately, A draft on the New Education Policy suggested that Hindi should be included in all schools, including in non-Hindi speaking states. The volatile...