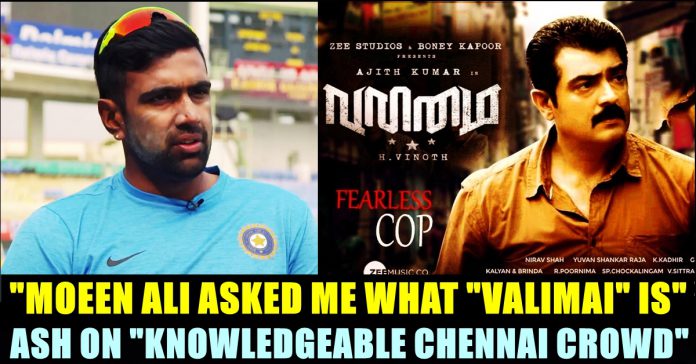 After successfully winning the second test against team England, All rounder Ravinchandran Ashwin who recieved the “Man of the match” award, interacted with his subscribers about the match and dedicated the special episode for the “Knowledgeable Chennai crowd”. Interestingly, the cricketer said that fans asked him about “Valimai” while fielding in the boundary. He also said that English all rounder Moeen Ali asked him what “Valimai” is and realized that they asked him too. The cricketer also shared about many interesting incidents that took place during the match including Virat and Pant encouraging him in Tamil.

Throughout the video, Ashwin thanked the Chennai crowd for their gesture and dedicated the video for them by titling the video as “Knowledgeable Chennai crowd”. Ravichandran Ashwin became the talk of the town after delivering a terrific century in the second innings of India’s second test match against England at his home ground Chepauk, Chennai. Entire internet came up with tweets lauding the 34 year old who already claimed legend status with his batting and bowling skills.

In this 24 minute long video, the cricketer said that his childhood dream came true and thanked the Chennai crowd with his whole heart and credited them for his massive century. One of the most interesting incident that was shared by the cricketer is about how Moeen Ali asked on what is “Valimai”.

One of the spectators at Chepauk watching #INDvENG match has asked England cricketer #MoeenAli for #Valimai update pic.twitter.com/WRnM9RTAef

“While I was fielding in the boundary line, a fan called me and asked about “Valimai update”. I got confused and couldn’t understand what he is talking about. Later, when I googled about it, I couldn’t control the laughter. The next day, Moeen Ali came to me and asked “What is Valimai?”. That’s when I realized that people asked “Valimai update” to him as well. “Master” is great but asking “Valimai update” to an England player is outstanding.” said Ashwin in his light manner.

While talking about Kohli and Pant saying “Vera level, Vera level” to encourage him, Ash said that they could have learnt it from Murali Vijay who used to say it while playing for the team. Video of the duo saying it to encourage the Tamil nadu player went viral among the Tamil speaking internet users.

In his video, Ashwin also suggested youngsters to believe in their hard work instead of expecting a magic to happen. He said that the crowd’s energy made him to score the century runs and cherished the moments where the “Knowledgeable Chennai crowd” sung happy birthday to Mayank Agarwal, Foakes.

Previous articleMan Tried To Enlarge His Penis By Using A “Ring” To Surprise His GF On Valentines Day !! Ended Up In Hospital
Next articleVideo Of Virat Kohli Scolding Shubman Gill Went Viral !! Check Why

Lalitha jewellers robbery that took place on the 2nd of October, is still making waves as it connects dots with South Indian film industry....

SIMBU IN BIG TROUBLE AGAIN As MUFTI Got Dropped !! Check These Reactions !!

Simbu aka Silambarasan aka STR, one of the controversial actors of Kollywood industry, is in big trouble now. Not many days ago, his project...