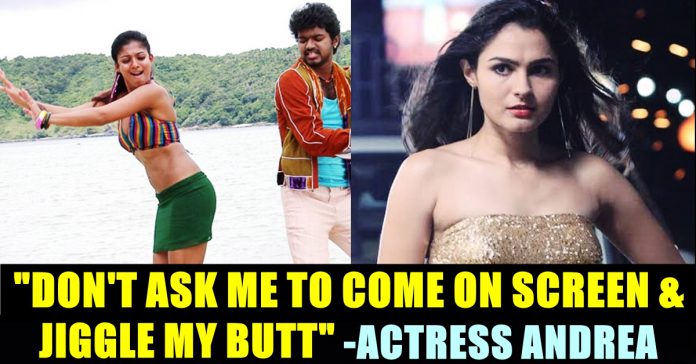 “It Is A Male Driven Industry” – Video Of Andrea Slamming Kollywood

Actress Andrea celebrated her birthday on 21st of December and the makers of the films she is part of celebrated it by releasing posters. Director Mysskin released the first look of his upcoming film “Pisaasu 2” whereas Team “Master” released an exclusive poster of herself with actor Vijay in the film. Mysskin also uploaded a post of his assistant directors celebrating the birthday of his heroine.

Along with them, fans also celebrated the birthday of the gorgeous actress by wishing her in social media platforms. Singer and actor Andrea Jeremiah who got an opportunity in Gautham Menon’s “Pachchaikili Muthucharam” to introduce herself, has acted in many films in Tamil industry. She is known for her appearance in movies such as Vishwaroopam, Aayirathil Oruvan, Aval, had sung a number songs for various leading music directors as well.

She was last seen in Vettri Maran’s 2018 film Vada Chennai in which she played the role of Chandra. The entire movie plot revolves around the emotions of Chandra and the actress impressed the critics and audience with her performance. Now, as a part of her birthday celebration, a two year old video of the actress is doing rounds in social media platforms in which we could see Andrea talking about how heroines are being casted in Tamil cinema.

In the two years old video, Andrea says that didn’t sign a single movie after acting in “Tharamani” which gained her enough recognition as a performer. She expressed her emotions on how heroines who are acting with top heroes getting opportunities in Kollywood. “After “Tharamani”, I haven’t signed a single film yet whereas a girl who acts opposite to Vijay and does nothing except dancing in three songs, would sign three-four films back to back.” Andrea said who questioned why after “Tharamani” she couldn’t get a film.

“Everybody loved the film, everybody raved about my performance. I am yet to sign a film. Because when a woman does a strong role that asks uncomfortable questions, they couldn’t accept it” the actress says in the event that took place on Women’s day.

“I can look hot, sexy and I can act also. Don’t ask me to come on screen and jiggle my butt and wear revealing clothes and be happy with that. I am not going to be happy with that. I can do a scene on screen where I am naked and it will have more relevance than women who say that I will not do kissing scenes but who are ultimately objectifying themselves on screen. That is the primary issue I have with Tamil cinema and it is slowly changing now” the actress said.

Further Andrea said that heroines are forced to do films with top actors before establishing themselves. “Deepika Padukone had to do films with Shah Rukh Khan and Deepika Paduokne to become what she is today. Nayanthara has to do films with Vijay, Ajith, Suirya, Rajini, then she becomes Nayanthara. Why can’t I just do strong roles and become an established actress ?? Why does the worth of an actress have to determined by her co-stars ? Why can’t a heroine do one strong role and become a huge heroine ?” questioned Andrea and said that Tamil cinema is a male driven industry.

Previous articleTop Hero Refused To Hurt Sonu Sood For A Scene !!
Next articleActress’s Savage Reply To Her Follower !!

A Facebook post which was uploaded in the year 2014 by the official handle of Actor Vijay has garnered the attention of the social...

“Flipkart Is Stalking Me” This Famous Actor Extremely Disturbed By The Online Shopping App !! Check Reactions !!