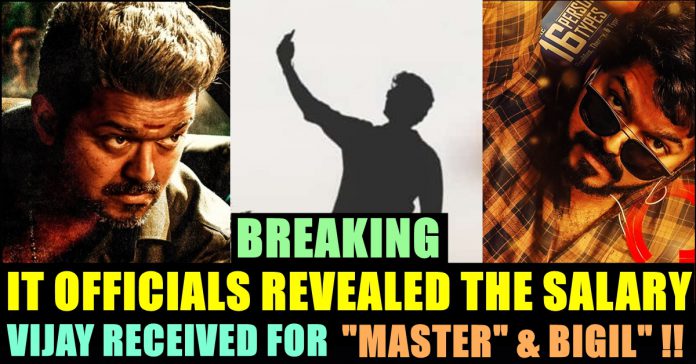 Officers of Income Tax Department has disclosed the salary details of actor Vijay for his latest released two films. The officers who went to his house around 8 in the morning of Thursday, also reported that the actor paid appropriate taxes for the salaries he received. As we all know, IT officers made a visit to “Master” shooting spot weeks earlier to accompany the actor before riding his house.

The latest report of News 18 says that three cars of IT officers reached the house of actor Vijay again. The officers who entered his house continued the search that took place two weeks earlier. The documents which were sealed earlier were tested again. “The investigation for actor Vijay regarding the income tax issue has ended with today’s search. The made the search in the rooms and lockers which were sealed during last month and the seals were removed now.” said a reporter of News 18.

The income tax officers revealed the salary details of actor Vijay as well. The actor, reportedly got Rs.50 crore and Rs. 80 crore as salary for “Bigil” and “Master” respectively. “Vijay paid taxes for his income and didn’t involve in any kind of tax evasion since the raid that took place in 2015 during his “Puli” release.” the reporter added.

Officials of Income tax department inquired actor Vijay in the shooting spot of director Lokesh Kanagaraj’s “Master”. The film which went on floors at the coal mine in the Neyveli Lignite corporation, got interrupted due to the visit of Income Tax officers who breached into the spot to inquire actor Vijay. Due to this unexpected visit, the shooting for the day was cancelled and is expected to resume after the inquiry.

As soon as the salary details of actor Vijay got released, fans got shocked and expressing their thoughts in social media platforms. However, fans of actor Vijay are very much happy on seeing their idol’s honesty. Check out some of their reactions below :

Officially Reported That Thalapathy @actorvijay Has Got RS.80 Crores As His Salary For #Master 😎💥

The Market For Thalapathy Is Getting Bigger And Better!! #Master #MasterTeluguFirstLook #MasterKannadaFirstLook

The results of IT raid
Proof for Bigil collection of 300 crores#Thalapathy @actorvijay salary for Bigil is 50 crores and for #Master 80 crores and He pays all taxes perfectly pic.twitter.com/u9XjmpgINc

On the work front, Vijay’s “Master” is scheduled to release on April 9th. The audio release is going to take place on 15th of this Month. The director and producer of Vijay’s next film is yet to be confirmed.

“When Are You Going To Arrest Her ??” Actress’s Frustrated Tweet Goes Viral

Bollywood’s Karan Johar Got Trolled For His Statement About KGF!!

Renowned Bollywood filmmaker Karan Johar became a subject to severe online troll after making a statement on how critics would have reacted if a...