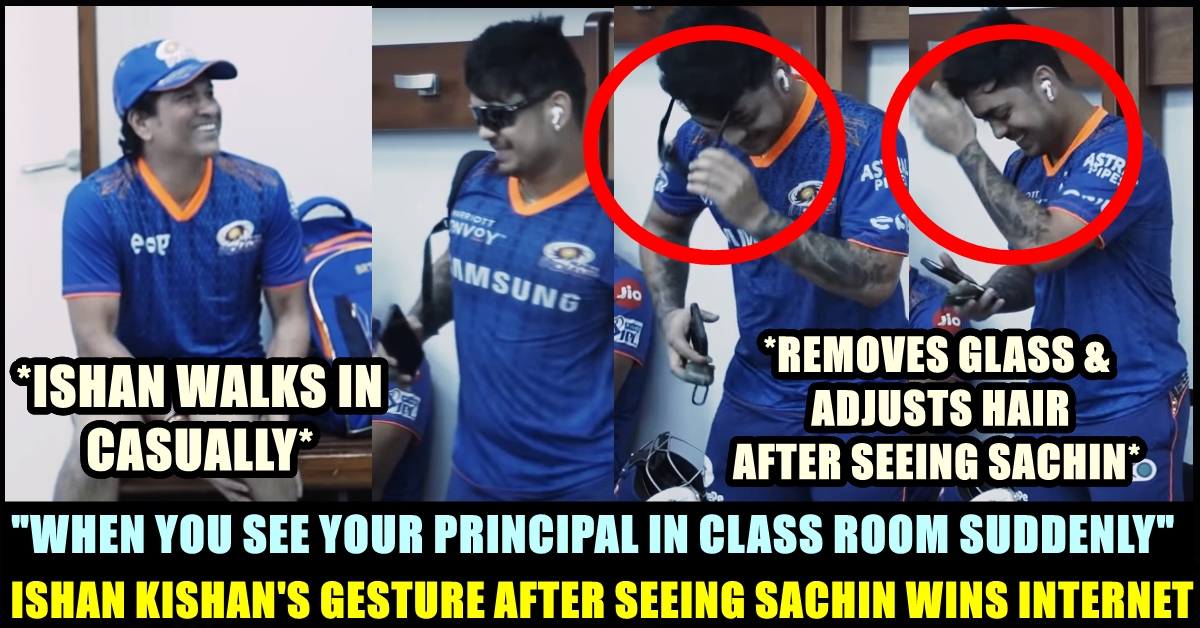 Young sensation Ishan Kishan’s instant gesture after witnessing Master Blaster Sachin Tendulkar inside the dressing room, is going viral in social media platforms with fans appreciating the lad for his respect towards seniors. Many lauded Ishan saying that his humble nature would take him to places after seeing him removing his shades due to Sachin’s presence. The viral video shows West Indian player and Mumbai’s prominent all rounder Kieron Pollard laughing out loud on seeing Ishan’s change of attitude.

Recently, a video of Ishan Kishan getting advice from Virat Kohli after failing to perform in the ongoing season went viral in social media platforms. In the whole season, he has scored only 107 runs in 8 matches with an average of 13.37 and a strike rate of 86.99. In last season, the youngster smashed 516 runs with an average of 57 to contribute his team to life the trophy for the fifth time.

This terrific form of Ishan Kishan gained him a place in the Indian cricket team against England in T20 league. In the series he scored 80 runs in three games with 1 fifty. He was also selected to play against India in the one day internationals and Ishan scored 60 runs in two matches with one fifty. His consistency impressed selectors, as a result of which he got selected to play for India in the 15 member squad for the upcoming T 20 world cup.

As of now, the 23 years old searching for his old form. Meanwhile, a video of himself reacting to the presence of Master Blaster Sachin Tendulkar in the dressing room goes viral. He enters the room by hearing songs with his shades on, immediately removes his shades and switches off the song he was hearing in his cell phone. While removing the airpods, he also wishes Sachin saying “Good Afternoon, sir!!” with the members in the whole room erupting in laughter sound. Pollard could be seen laughing for a long time.

watch the full video below :

Many compared the gesture of Ishan towards Sachin with a student-professor scenario in a college campus. Few appreciated Ishan for his humble attitude and the habit of respecting seniors. Check out some of the reactions below :

Ishan Kishan will go a long way with this respect to elders gesture.

He is so shy in front of Sachin Sir 😂 https://t.co/gWJMa6s1zI

CSK Fans Trolling Experts Who Believed That The Team Won’t Make It To The Playoffs !!
Photographer Deleted 600 Marriage Photos After Being Denied Food At A Wedding !!