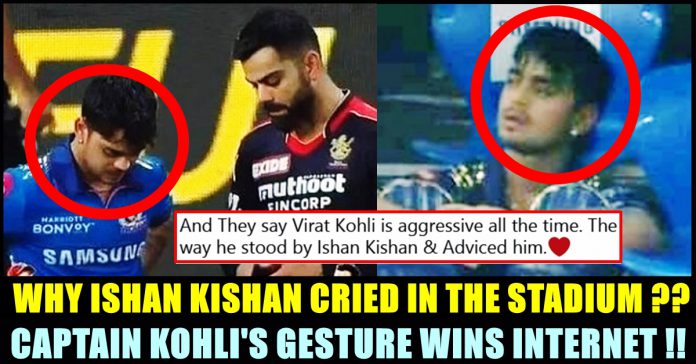 After being selected to play for team India in the upcoming world cup T 20 as one of the three openers, young lad Ishan Kishan lost form and almost shed tears after failing to give Mumbai Indians a good start in their recent match with Royal Challengers Bangalore. A video of Indian captain Virat Kohli consoling the 23 year old is going viral in the social media platforms with fans praising the former.

Mumbai Indians lost to Royal Challengers Bangalore by 54 runs on Sunday. Opener of the defending champions who was expected to play the key role in chasing the 170 plus, had a poor outing as he managed to score only 9 runs in the 12 balls he faced with only one four. In the whole season, he has scored only 107 runs in 8 matches with an average of 13.37 and a strike rate of 86.99. In last season, the youngster smashed 516 runs with an average of 57 to contribute his team to life the trophy for the fifth time.

This terrific form of Ishan Kishan gained him a place in the Indian cricket team against England in T20 league. In the series he scored 80 runs in three games with 1 fifty. He was also selected to play against India in the one day internationals and Ishan scored 60 runs in two matches with one fifty. His consistency impressed selectors, as a result of which he got selected to play for India in the 15 member squad for the upcoming T 20 world cup.

Now, after finding it difficult to make a come back to his old form in this ongoing IPL tournament, Ishan Kishan went extremely emotional and almost cried at the stadium. He looked upset, sitting in the stairs throughout the batting innings of his team which was losing. After the match, Indian captain Kohli who is currently captaining Royal Challengers Bangalore, had a few words with the youngster by having his arms around his shoulder to make him feel comfortable.

Check out some of the reactions for Kohli’s gesture towards Ishan Kishan :

Nice to see Virat Kohli talking with Ishan Kishan who is going through such a tough phase and he is part of the T20 World Cup squad as well. #IPL2021

And They say Virat Kohli is aggressive all the time. The way he stood by Ishan Kishan & Adviced him.❤#RCBvMI pic.twitter.com/SC1p6j1DgG

Learning from the Best.

So beautiful to see these pictures. Two Legends talking to Two Youngsters. pic.twitter.com/oGoY16v34p

He who never steps back in helping the needy ❤🖤 so nice to see Virat Kohli talking with Ishan like this after match.. #ViratKohli #MIvsRCB pic.twitter.com/7I108iEAzE

Mumbai captain Rohit Sharma, during the post match presentation, said Ishan is a talented player by nature and said that he doesn’t want to put too much pressure on him. Sharma said that he just wants Kishan to play his natural game as he played in the IPL tournament of last year.

Previous articleJUST IN : This Top Kollywood Movie Reviewer Entering BIGG BOSS House !!
Next articleTamil Actress Answers To A Fan Who Asked Why She Has “White” Hair !!

Siddharth Suryanarayan is an Indian film actor who appears in Tamil, Telugu, Hindi, and Malayalam language films. He has been featured in advertising because...