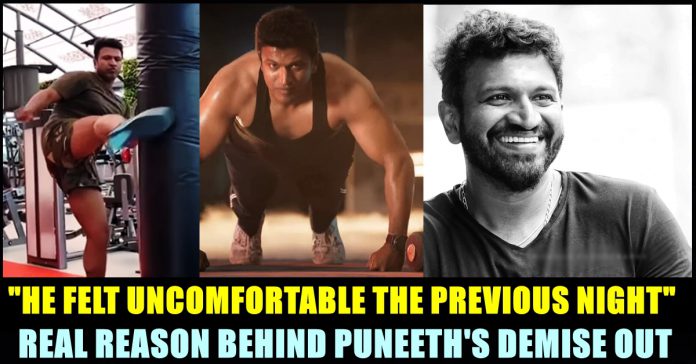 After the initial reports, details about the real reason behind Kannada Super star Puneeth Rajkumar ‘s death are out. The actor who is widely known as a physical fitness enthusiast, died at the age of 46 and left the entire country in a deep shock. Several videos of the actor working out in unique ways often went viral in social media platforms. Walkers of Sadhashivanagar, Bengaluru recall about Puneeth as a regular jogger even when the COVID 19 virus peaked. It is notable that the actor’s “Fight Corona Work Out” went viral in Internet with million plus views.

On the Festival day of Vara Mahalakshmi, Puneeth uploaded a video of himself working out with a caption saying “Time & again we realise, Health is True Wealth. #HappyVaramahalakshmi #PowerInU” in his official Instagram handle.

Fans and admirers of the actor sheer shocked over the news on the actor succumbed to heart attack. Dr. CN Manjunath, director of Sri Jayadeva Institute of Cardiovascular Sciences and research institude, cited Family history of heart attacks in Puneeth’s case as one of the several factors that caused his demise. It is notable that Punith was the brand ambassador for the “Prevent Premature heart attack” initiative of the state-run SJCSRI and also took part in the launch of “Heart Attack in Young age clinic” at Jayadeva hospital in September 2017.

Dr. Rahul S Patil who worked closely with Puneeth said that the actor suffered a massive heart actor at a very young age. Doctor Patil said that the heart attack may have been manifested when he was working out in the gym. “It is said that on Thursday night he was not comfortable and still went to the Gym on Friday morning. A coronary artery may have got blocked when he was gymming, causing a sudden cardiac arrest” the Doctor said, according to The Times of India. “Even slight discomfort should not be ignored and one should not hit the Gym in that state” he added.

“One must be cautious of high intensity exercise as it can cause shear stress to the heart” Doctor Manjunath said. “Sometimes, it helps to listen to your body’s signals and take a break…Wish he had done that” Doctor Sharmila, who is known for doing character roles in Kollywood films, said in her tweet.

Sometimes, it helps to listen to your body’s signals and take a break…Wish he had done that 😔😔 pic.twitter.com/XO27X8zdlT

We have faced problems such as finding our names wrongly printed in our very own identity cards since our childhood days. Government continues to...