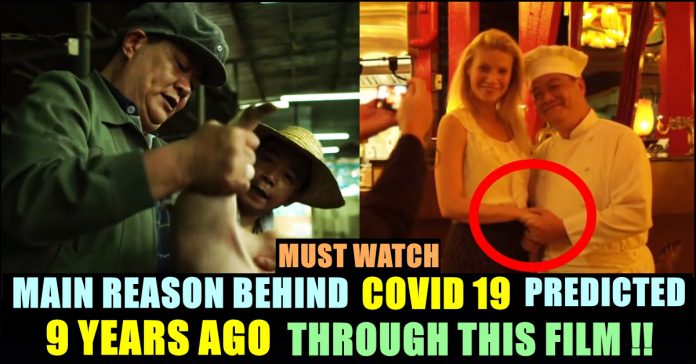 The whole world is terrorized right now and is combating the deadly disease COVID 19 to avoid heavy damages. The virus killed more than 24,000 people across the world so far and is expected to spread and more. Every countries are implementing safety measurements such as social distancing and maintaining hygiene. The disease initially discovered in China and the most affected country due to the disease is Italy. However, the main, accurate reason behind the virus is still undefined.

Meanwhile, the Internet users are highly believing that a movie named as “Contagion” which was released in the year 2011, directed by Steven Soderbergh has the answer for the main reason behind this disease. The film revolves around how a deadly disease spread across the world through a woman who recently visited Hong-Kong of China.

Online users are feeling that the film accurately portrays what is happening right now. The film shows how people are suffering and how the medicine is found for the virus in chronological order. Most importantly, the film shows how the disease made its entry into the world of humans and how people would behave if the situation gets worse. The 106 minute long film starts with Day 2 and ends with Day 1. The Day 1 was shown only during the last 3 minutes of the film in which we can see how the disease materialized.

A bulldozer knocks down a tree and disturbed few bats which flies from that tree during the wee hours in China. It sits on a banana tree and after eating a banana from it, the bat finds shelter in a pig farm where it drops the leftovers of the banana it ate. A pig which swallows the leftovers slaughtered and prepared by a Chef in a restaurant who shakes hands with an American customer. She happens to be the one who spreads it across the world.

The film which is a box office bomb, garnered several views from across the world since the Corona crisis in 2020. Check how Internet is feeling about the movie below :

just watched #Contagion and i'm shook. how was this movie released 9 years ago? it actually seems like a documentary of what is happening right now!!! pic.twitter.com/Yjj5fEBlQD

AND I’M LIVING THROUGH IT! I can’t believe this!

Stay safe everyone, take this seriously so we can beat it.

Don’t be the dumb people in the movie that we all 🤣🙄 at. pic.twitter.com/dpdXGLwXhM

#Contagion is exactly the sort of movie that should be aired right now to hammer home the fucking message that this isn't a bloody joke or the flu.

Watched #Contagion (2011).
Chilling AF. It is very identical to what’s happening now. Watching it is terrifying considering we are in such a similar position. Ofc Steven took ref. from past pandemics but this is even more relevant now than what it could have been then. #COVID19 pic.twitter.com/fnDwVFzs4V

A movie much ahead of its time. You will feel like you are watching a documentary about today's outbreak. #Contagion

Years back. Its scary and it's unbelievable#Contagion (2011) Reel ~ #Coronavirus (2020) Reality pic.twitter.com/vR5yT6dIzO

Have you watched the film yet ?? Comment your views below !!