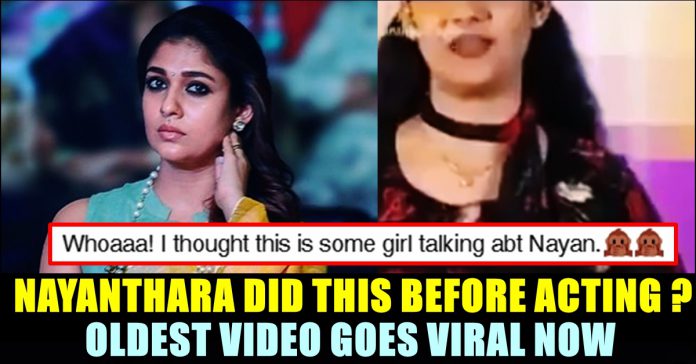 Nayanthara is one of the very few female actors who rules Tamil film industry for more than 15 years. Today, she is the highest paid actresses of South Indian film industry. She is also the only actress who manages to act in both female centric movies and hero oriented movies. The surprising fact about it is that the “Bigil” actress shines in both the regions. The actress yesterday celebrated her 35th birthday along with her live-in partner Vignesh Shivan.

Apart from that the actress had a release with Sivakarthikeyan and with Nivin Pauly in this year. She is also the female lead in Rajinikanth’s upcoming film “Darbar” and also working in her own production venture “Netrikann”. As we all know, Nayanthara started working in film industry since early days of her late teens.

The actress was 21 years of old when she debuted in Tamil film industry through the movie “Ayya”. Two years earlier which is during her late teen, the actress acted in a Malayalam movie named as “Manasinakkare”. Now to our shock an older video of the actress anchoring a show has been surfaced in Internet.

The video was believed to be shot before her acting stint. In the video we can see a young Nayanthara introduces herself as Diana to the viewers of the Kairali TV. Watch the video below :

Nayanthara’s birth name is Diana Mariam Queen and she was born in Bangalore to a Kerala based couple. As soon as the video surfaced, it went viral among the netizens who are sharing it with various captions. Some couldn’t even that it is Nayanthara.

Check out some of the reactions this video received :

It doesn’t matter how you start,

It’s all about how it ends 🔥#Nayanthara #BossLady https://t.co/useonH82J4

What a Transformation #Nayanthara 😳😳pic.twitter.com/XXx5IUzTQL

Whoaaa! I thought this is some girl talking abt Nayan.🙊🙊
What transformation this . https://t.co/0lU6NnSY7p

What do you think on this transformation of Nayanthara ? Comment your views below !!