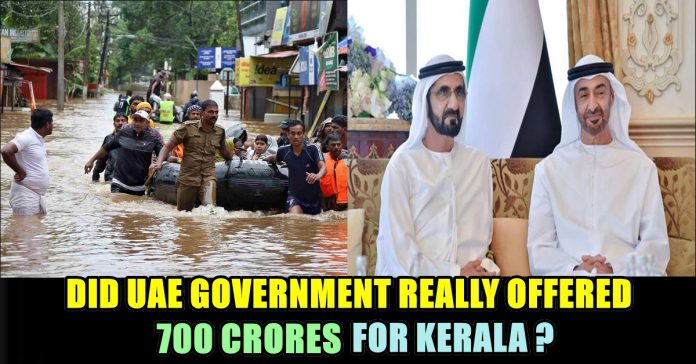 News headlines – from both international and domestic Indian media – screamed on Wednesday that India had rejected an aid offer of 7 billion Indian rupees (100 million US dollars) by the United Arab Emirates (UAE) following the devastating Kerala floods which have killed more than 400 people so far. 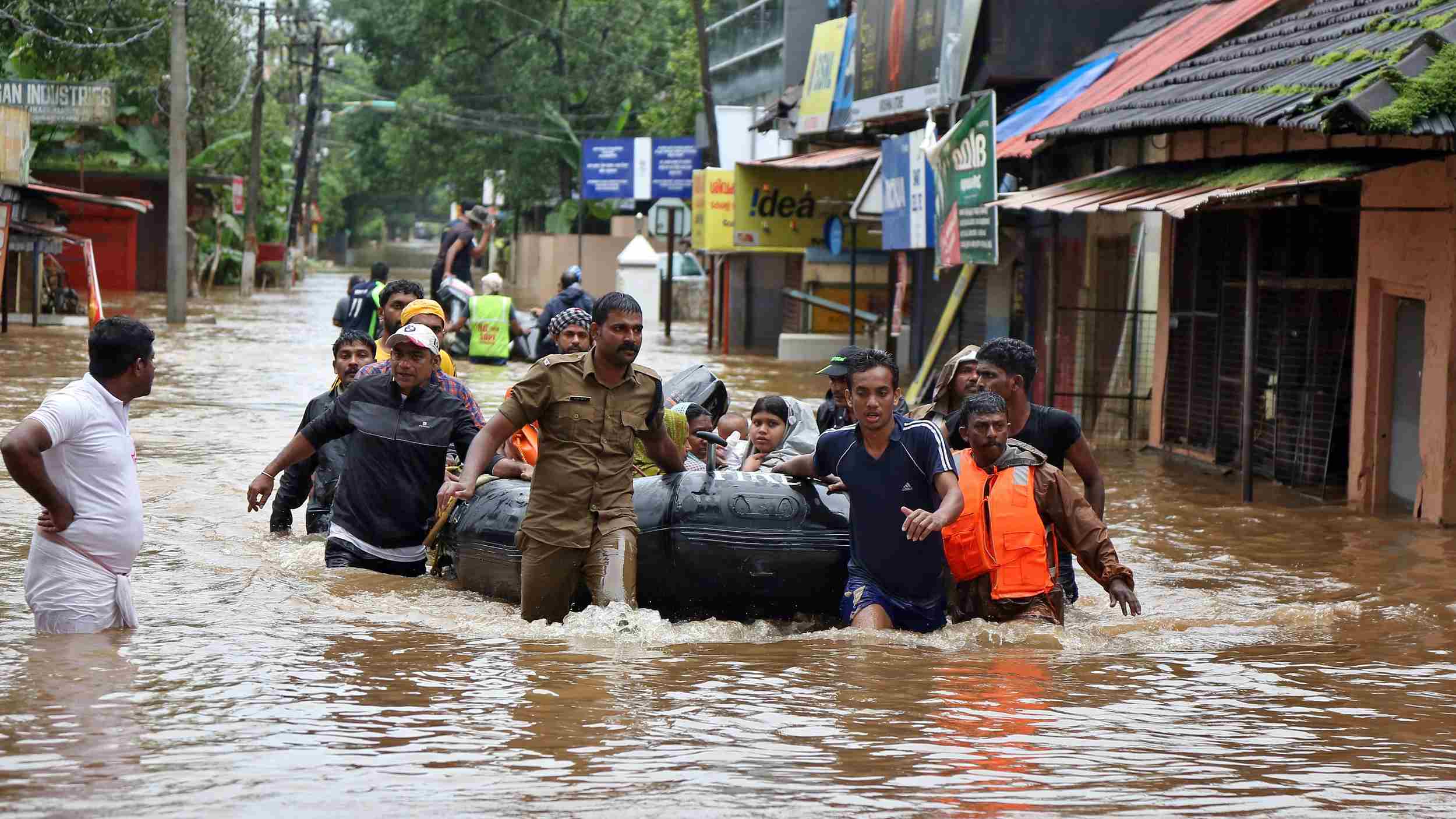 A closer scrutiny of the facts however reveal there are no statements or reports from any offical UAE sources that substantiate the direct financial aid offer. So did the UAE really make such a proposal, which was subsequently rejected by India as many media reports suggest? 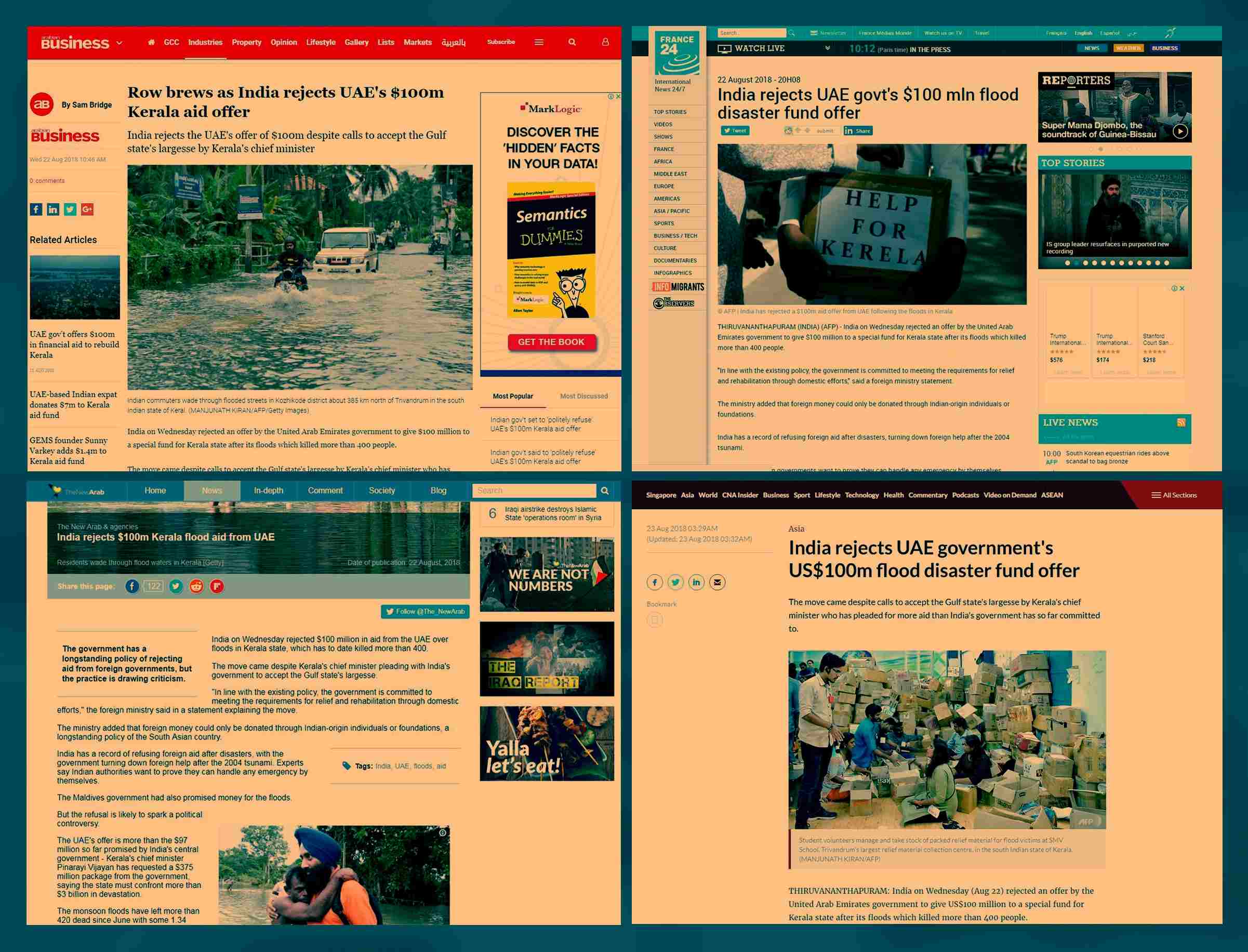 While the report about India rejecting assistance from foreign governments is a fact substantiated by a statement from the foreign ministry, the same can’t be said about the UAE proposal which was mired in doubts and controversy ever since the Kerala Chief Minister Pinarayi Vijayan made the claim about such an offer citing a private individual on Tuesday.

CGTN Digital did a fact check of the information available in public domain to find out the truth about the UAE’s reported aid proposal for Kerala floods and here’s what we found:

1.    The only official statement is unreliable, cites third source 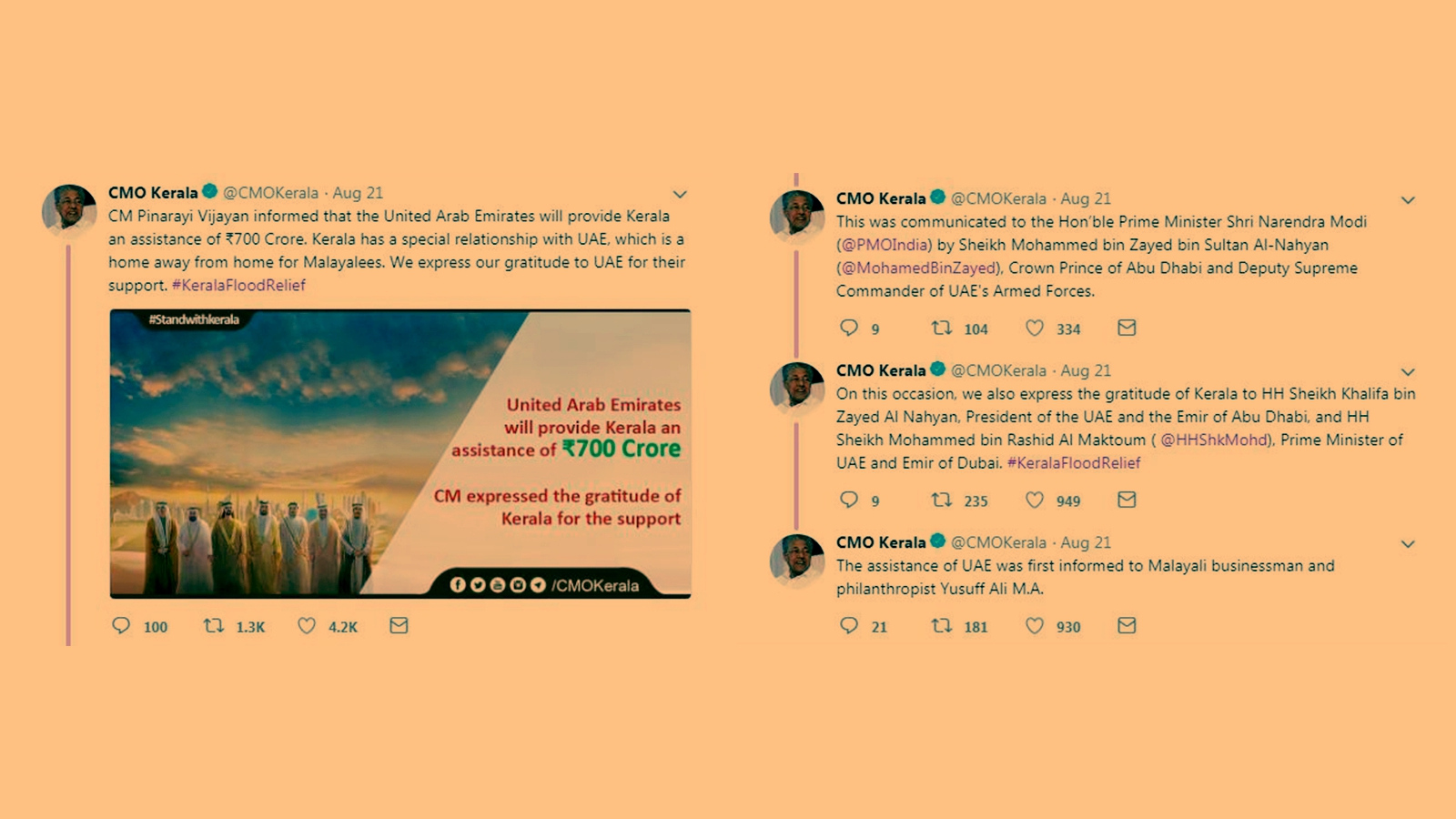 The Kerala chief minister’s office posted a series of messages claiming the UAE has offered an assistance of 100 million US dollars, citing a message from Indian billionaire businessman in the UAE Yusuff Ali M A on August 21, 2018.

The sole public statement about the UAE offer has come from the Kerala chief minister citing a third source.

Vijayan at his press conference on Tuesday said that a prominent Indian Malayali (native of Kerala) billionaire businessman in the UAE, Yusuff Ali M A, informed him that the Abu Dhabi Crown Prince Sheikh Mohammed bin Zayed al Nahyan had spoken to the Indian Prime Minister Narendra Modi and offered an assistance of 7 billion Indian rupees for Kerala floods.

It is worth mentioning that Yusuff Ali has contributed 3 million US dollars for the flood victims, making him among the highest individual donors. However even the billionaire businessman hasn’t yet confirmed Vijayan’s statement, which were also posted by the official Twitter handle of the chief minister.

Some analysts say the issue is being politicized ahead of India’s parliamentary elections next year. The state government is run by Communist Party of India Marxist (CPIM) which is a political opponent of the Bharatiya Janata Party (BJP) that heads the federal government. 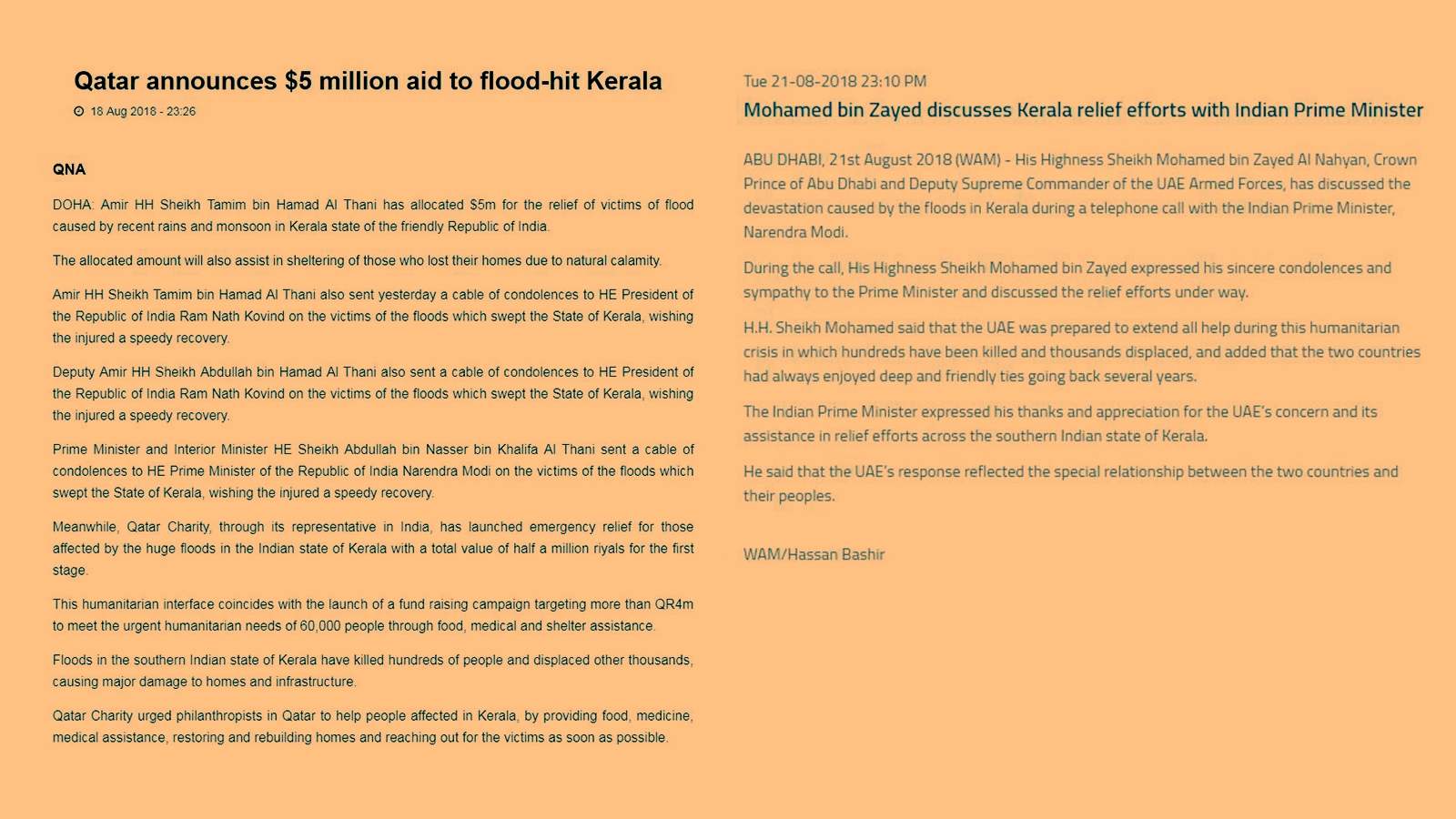 While the UAE’s official Emirates News Agency, also known as WAM, reported on Tuesday about Sheikh Mohammed bin Zayed’s telephone conversation with Modi, there was no reference to any amount being proposed as aid. This is in contrast to Qatar’s offer of 5 million US dollars for Kerala flood victims, which was clearly mentioned in a report by official Qatar News Agency (QNA).

Therefore, doubts remain over whether there was any formal offer of financial aid from the UAE. 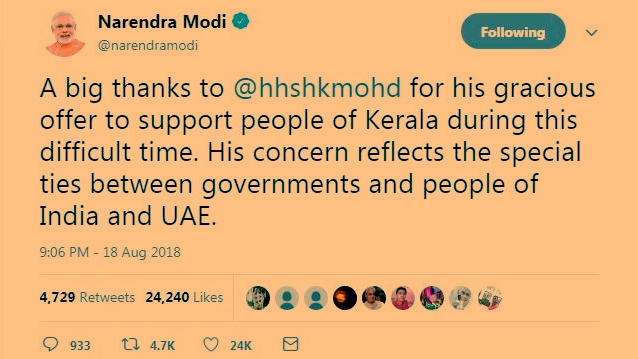 Following the reports of India’s rejection of foreign aid for Kerala flood victims, many wondered why New Delhi did an about-turn after the Indian Prime Minister, in one of his tweets, had previously thanked another UAE royal for his “gracious offer.”

Some thought India had initially accepted aid from the UAE and that the rejection was an afterthought. However, that’s quite far from the truth. 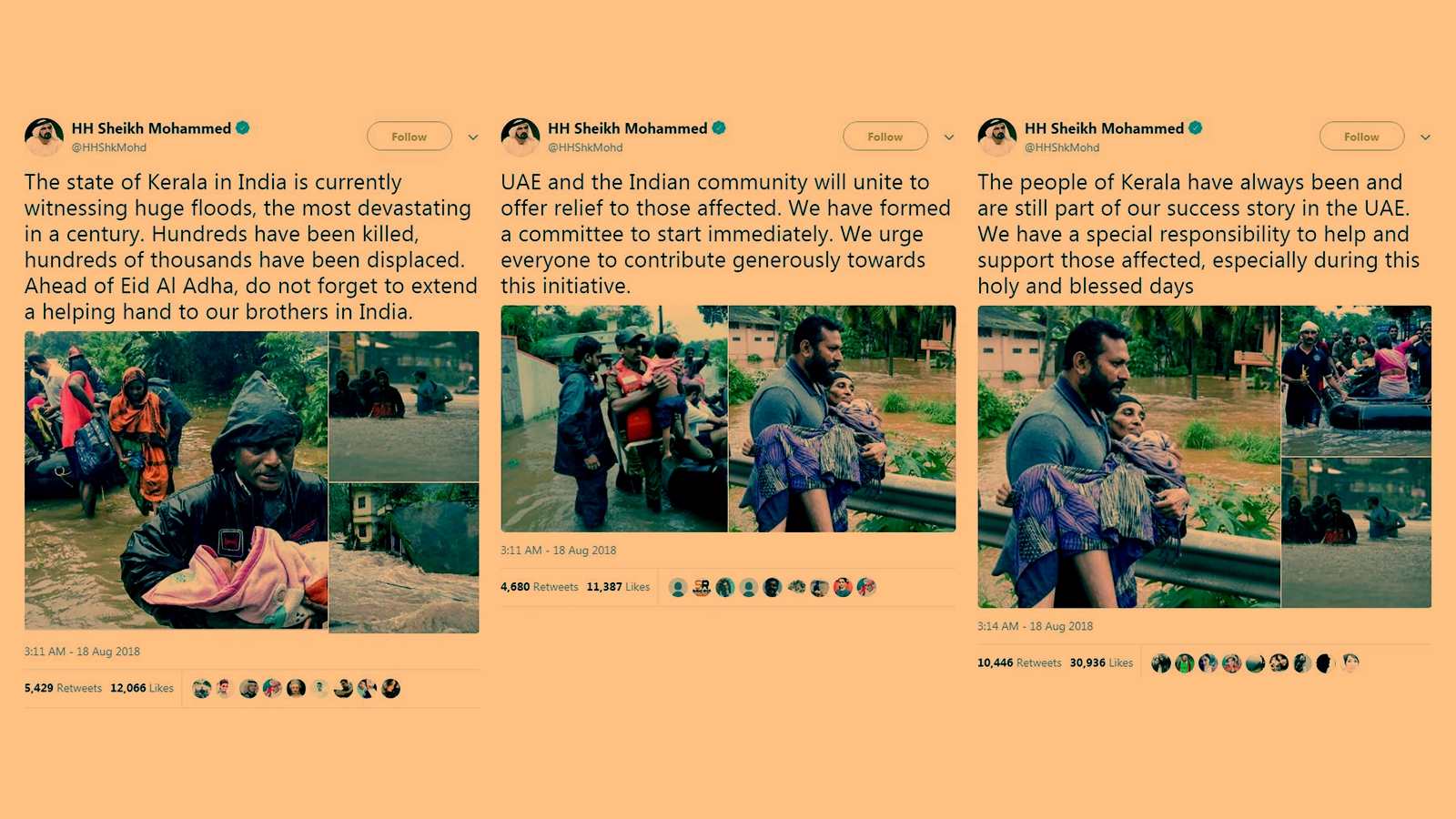 Modi’s tweet thanking the UAE was in fact a response to a series of tweets by Dubai ruler Sheikh Mohammed bin Rashid al Maktoum in which he pledged support for the victims of the natural calamity.

Besides tweeting in English, the Dubai ruler also posted his messages in Arabic and Malayalam, which is the official language in Kerala, drawing huge praise from people in India. 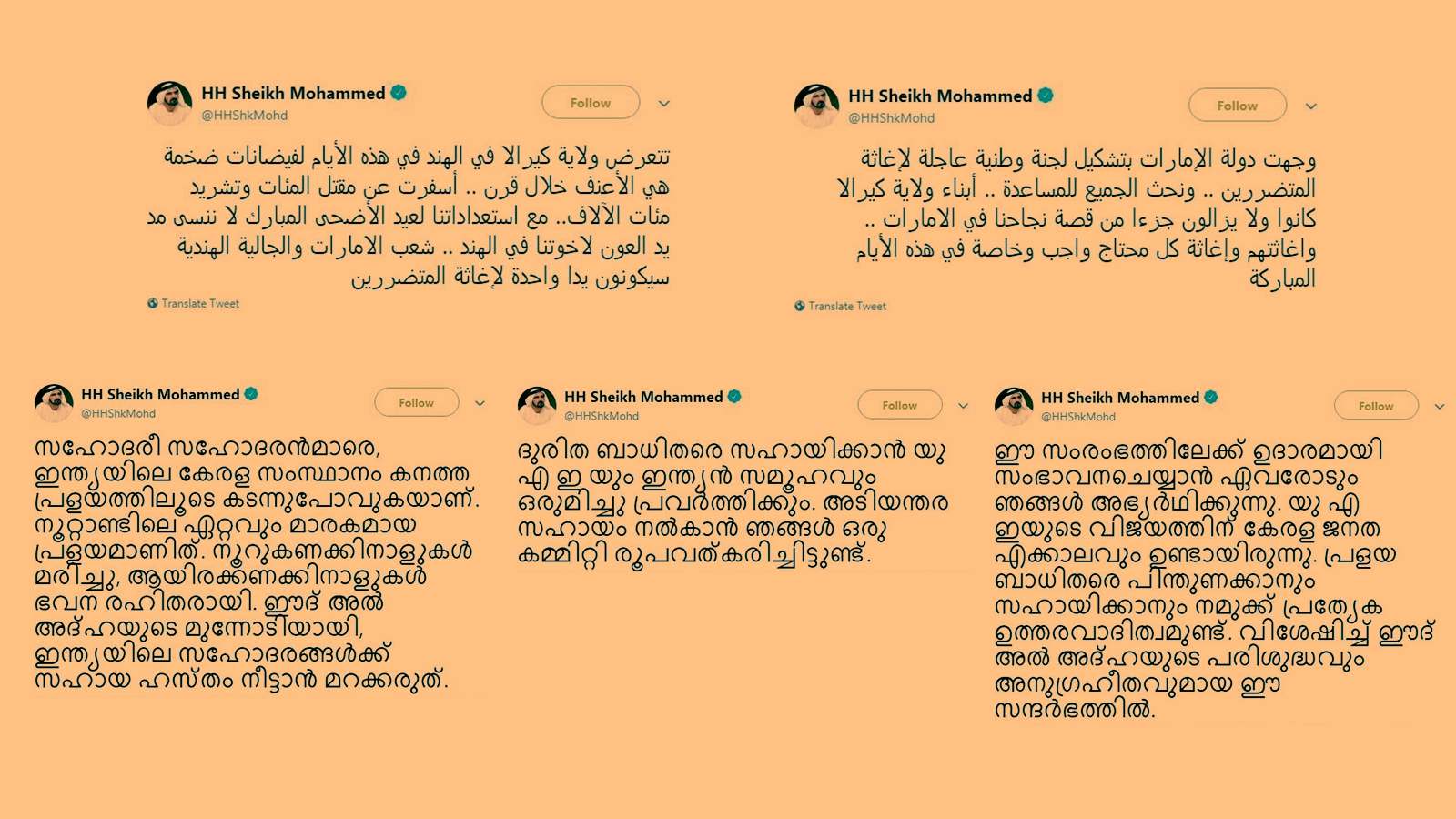 The Dubai ruler posted his messages in Arabic and Malayalam, which is the official language in Kerala, drawing huge praise from people in India.

However, even in this exchange of tweets, there was no mention of any financial aid proposal from the UAE.

The Indian media widely reported on financial aid offers from several other countries besides the UAE, including from Qatar, Maldives and Thailand, prompting India’s Ministry of External Affairs (MEA) on Wednesday to issue a statement on India’s position on international assistance.

The MEA, while thanking the foreign governments for their support, emphasized India’s current international aid policy that mandates the government to “meet the requirements for relief and rehabilitation through domestic efforts”.

It is worth noticing that the MEA statement makes a general reference to “foreign governments” without naming any country, not even the UAE. 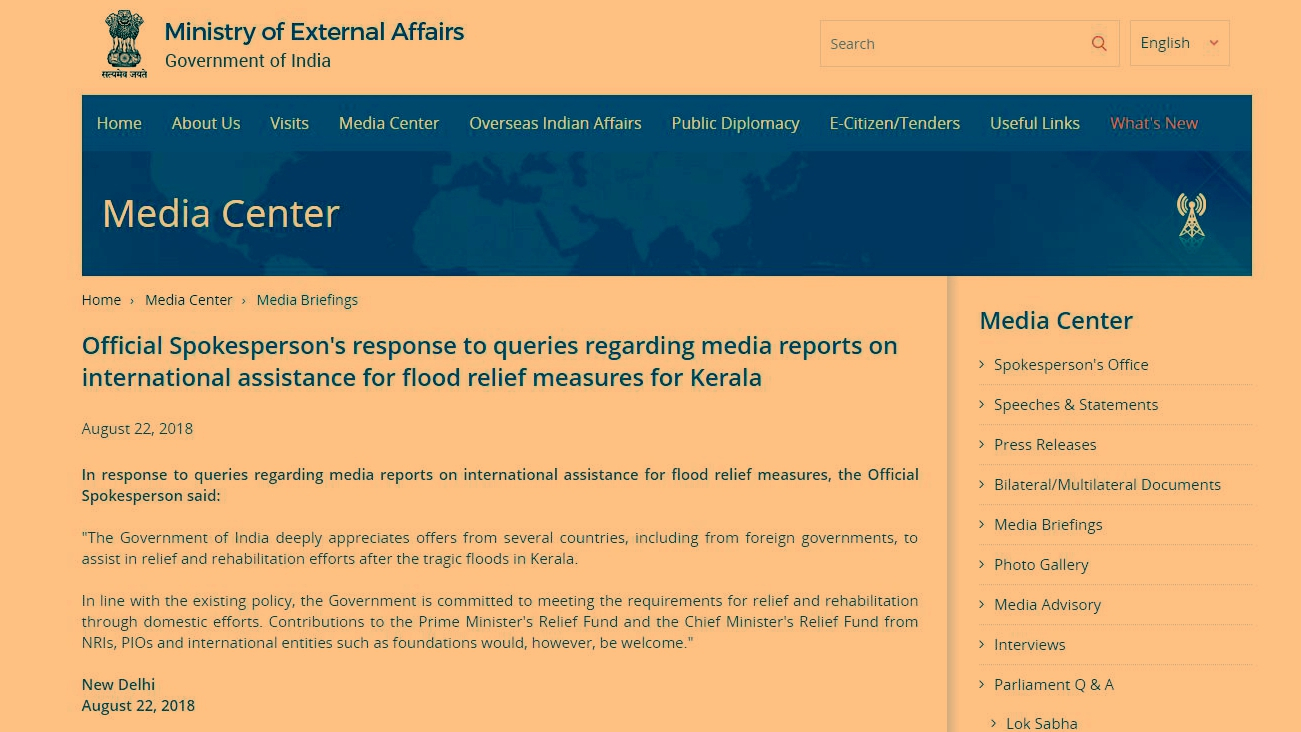 A screenshot of the official statement from India’s Ministry of External affairs rejecting foreign aid for Kerala flood relief in line with the country’s international aid policy.

The diplomatic refusal of foreign financial assistance is in line with India’s policy that was put in place after the 2004 tsunami which devastated vast swathes of the southern state of Tamil Nadu and Andaman and Nicobar islands in the Bay of Bengal.

During the 2004 tragedy, the then Indian Prime Minister Manmohan Singh announced that New Delhi will not accept foreign aid for rescue and relief operations asserting that India could cope with the situation on its own.

This marked a watershed moment for India’s foreign aid policy as since then subsequent Indian governments have systematically declined foreign financial aid during natural disasters – the 2005 Kashmir earthquake and 2013 Uttarakhand flood being the two prominent such instances, where India maintained that it has the capacity to handle such crises.

Conclusion: So while India has simply asserted its 14-year policy of declining foreign aid through the MEA statement, the international media headlines could be misleading as it is neither a direct rejection of an offer from the UAE – an offer which can’t be confirmed with certainty in the first place.

However, India’s refusal of foreign aid has certainly sparked a debate on whether the country can afford to have such a policy during a natural calamity like the one being witnessed in Kerala. Shouldn’t New Delhi embrace the help coming from all quarters, including foreign countries?

(Cover: Rescuers evacuate people from a flooded area to a safer place in Aluva in India’s southern state of Kerala, August 18, 2018. /VCG Photo)

News Was Published In CGTN

Previous articleMurali Vijay Posed With A Beer Bottle As A Victory Celebration !! Fans Trolling Him To The Core !!
Next article“Everyone Go Home, Vijayalakshmi Is The Winner Of BB2” Declared This Director !!

Actress Kajal Aggarwal who is expecting her first child with her husband Gautam Kitchlu, reacted to the trolls, memes and negative comments that were...

September 15, 2021 marks the 113-th birthday of Conjeevaram Natarajan Annadurai who is fondly called by his followers and people of Tamil nadu as...