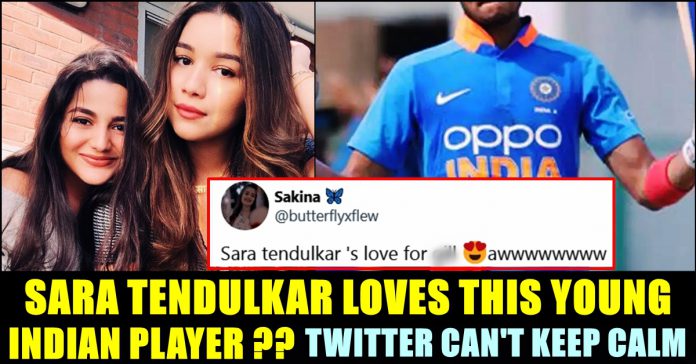 Not many days ago, former Indian cricketer Sachin’s Tendulkar’s daughter Sara Tendulkar and Shubman Gill used same post for their social media posts and left fans speculating about what kind of relationship they are having. Now, the 22 year old came up with an Instagram story to add fuel in the love rumours.

Sara Tendulkar has completed her schooling or primary study at Dhirubhai Ambani International School in Mumbai. After her schooling, she went to University College of London for further study. She is a graduate in Medicine, according to reports. The 22 year old is very much known among fans for her social media existence.

Shubman Gill, the young lad who is considered as a key player for the Kolkata Knight Riders team in the ongoing IPL tournament, is currently not having a good time batting. On Wednesday, he failed to score big for his team but his on field efforts were appreciated widely.

Impressed by one of his fielding efforts, India legend Sachin Tendulkar’s daughter Sara Tendulkar shared a picture of Shubman in her Instagram story with a couple of heart emojis. The post from Sara has gone viral on social media with fans once again speculating about dating rumours between her and the KKR star.

Sara and Shubman are rumoured to be dating each other for a while now and the 22-year-old has on several occasions, reacted to the KKR batsman’s posts on Instagram. Here’s the screenshot of Sarah’s story in Instagram :

During the end of July month, the duo uploaded posts in their respective social media posts with similar captions which made netizens to link them with romantic relationship.

When Shubman Gill uploaded a post saying that he bought a car, Sarah congratulated by sending him a heart emoji only to get teased by Hardik pandya.

In another post, Sarah hinted about herself editing a picture for him.

One is focused while the other is chilling. Which one are you this week😉

Here’s how netizens are reacting on seeing these kind of activities from the duo :

how have i JUST found out that shubman gill & sara tendulkar are a thing??? 🤡

Sara Tendulkar please break up with this fraud gill

Comment your views on these online activities of Sarah and Gill !!

“Kamal Is The Main Reason Behind Malpractice In NEET” Said Minister Jayakumar !! GOT MERCILESSLY TROLLED !!

Kamal Haasan, the leader of political party Makkal Needhi Maiam, slammed central and state government in his recent interaction with the students of Chennai...

We can part Tamil cinema as before Padayappa and after Padayappa. The film rewrote the meaning of "mass" in the history of Tamil cinema...