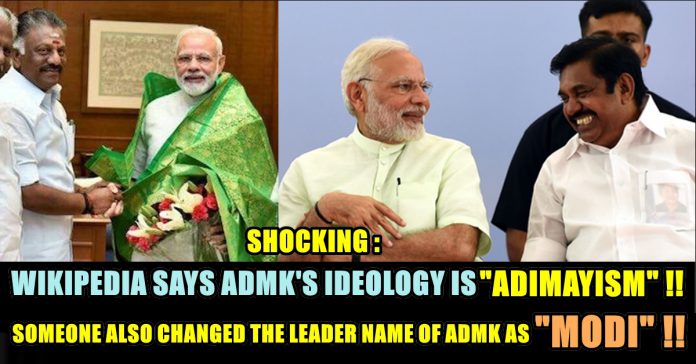 All India Anna Dravida Munnetra Kazhagam (AIADMK) (All India Anna Dravidian Progress Federation) is an Indian political party in the state of Tamilnadu and in the union territory of Puducherry. It is currently in power in the state of Tamil Nadu and is the third largest party in the Lok Sabha. It is a Dravidian party and was founded by M. G. Ramachadran on 17 October 1972 as a breakaway faction of the Dravida Munnetra Kazhagam (DMK). From 1989 to 2016, AIADMK was led by Jayalalithaa, who served as the Chief Minister of Tamilnadu on several occasions. 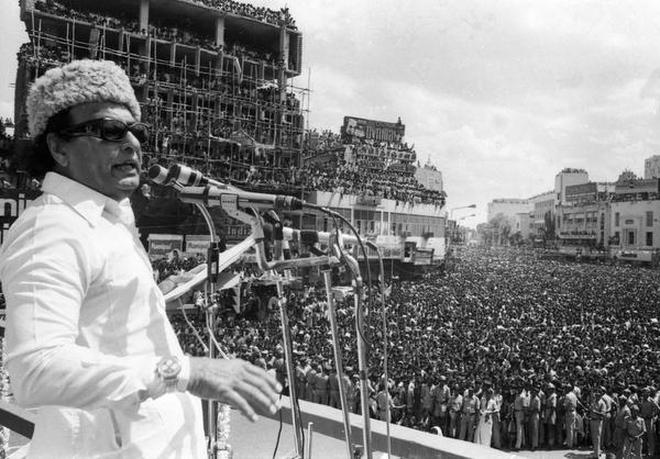 The party has won majorities in the Tamilnadu Legislative Assembly seven times, making it the most successful political outfit in the state’s history. The party headquarters is located in the Royapettah neighborhood of Chennai, Tamilnadu in a building donated to the party in 1986 by Janaki Ramachandran, MGR’s wife.

The party was founded in 1972 as Anna Dravida Munnetra Kazhagam (ADMK) by M.G Ramachandran, a veteran Tamil film star and a popular politician. It was set-up as a breakaway faction of the DMK led by M. Karunanith, the then Chief Minister of Tamil Nadu, owing to serious differences between the two. Later, MGR prefixed the All India (AI) tag to the party’s name. Since its inception, the relationship between the AIADMK and DMK has been marked by mutual contempt.MGR used his fan network to build the party cadre, and estimates claim his party recruited more than a million members from the first two months of creation.C.N Annadurai’s ideologue and movie mogul R.M.Veerppan was key architect in unifying the MGR fan clubs and further consolidating the party structure in the 70s. 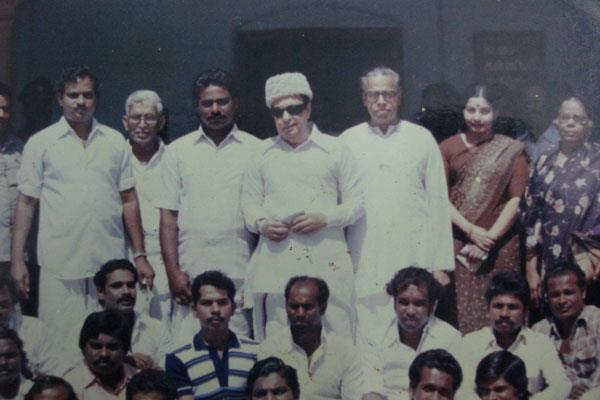 For months since the hospitalisation and subsequent death of former Chief Minister Jayalalithaa, the ruling AIADMK appeared to be doing the bidding of the NDA government at the Centre and the BJP.

Critics also alleged that the BJP had a hand in the coming together of the factions of the AIADMK led by Chief Minister Edappadi K. Palaniswami and his predecessor in office O. Panneerselvam. 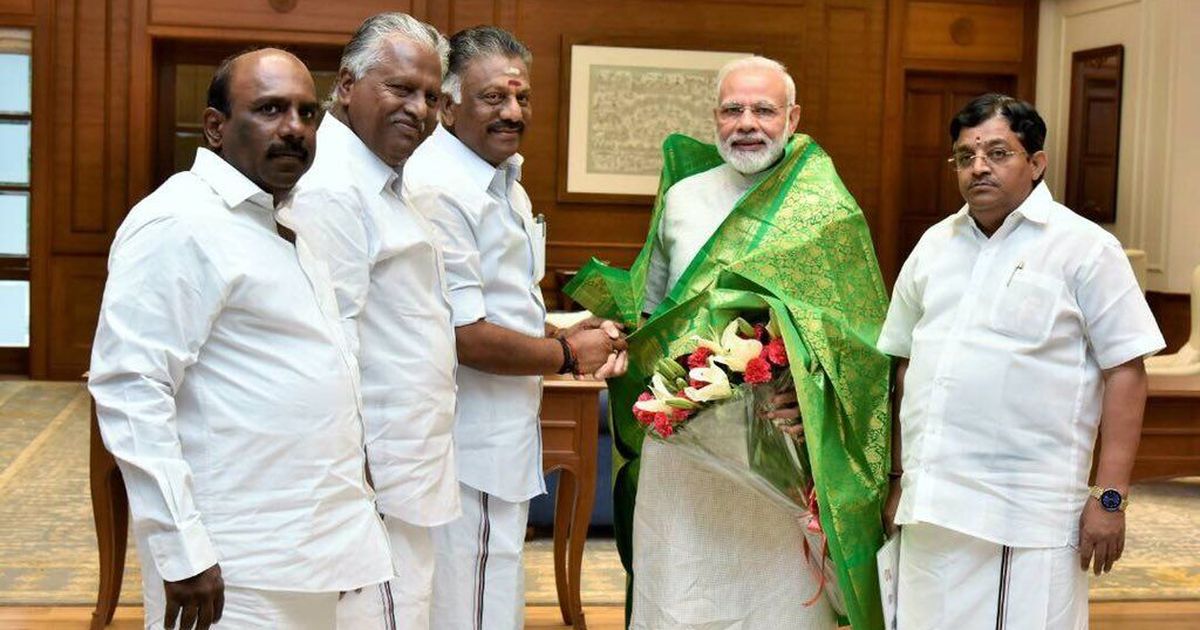 For past few days Netizens trolled the state’s chief minister for acting as a hand of Narendra Modi. They also made memes out of the state being controlled by the Central government.

Now they went one step ahead and changed the official details of ADMK including the Leader, president and chair person’s name. To our shock to indicate that the party is currently ruled by BJP the one who changed the details changed every name into BJP ministers.

They also changed the ideology into Adimayism and Tyre Nakkiyism which means Slavery. As the details in Wikipedia is editable for anyone, someone has changed the entire details in order to troll the party. Wikipedia is a wiki, meaning that anyone can edit any unprotected page and improve articles immediately for all readers. You do not need to register to do this. 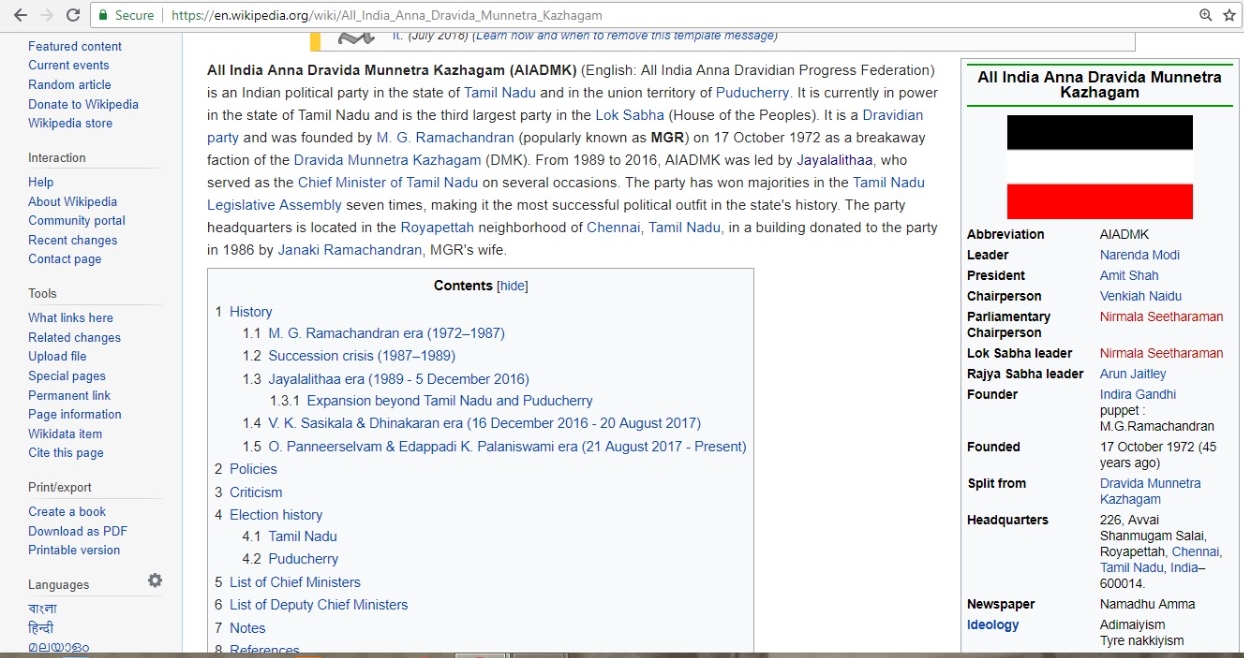 Update : The details has been re-edited just now but the screenshots getting viral in the social media platform.