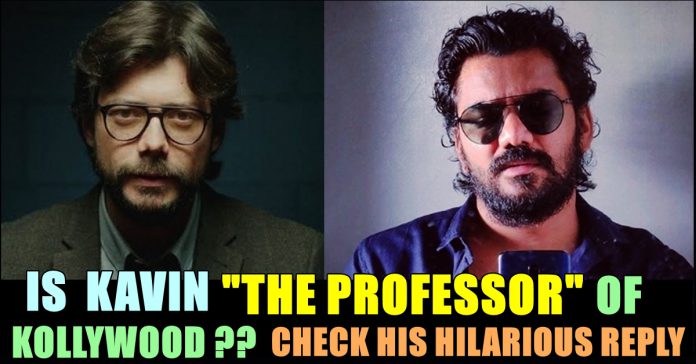 Is Kavin “The Professor” Of Kollywood ?? Check His Reply !!

Fans for La casa De papel aka Money Heist is increasing in India in daily manner. As the fourth season of the series released recently, people of the country who finding ways to kill the Quarantine boredom, started watching the series in Netflix it seems. We have been witnessing many memes and videos in Internet regarding the series for past few days.

The series which garnered fans from all over the world with its previous three parts, didn’t fail to impress its followers in the fourth part as well. With compelling characters, chronological narrative structure and most importantly the intricate heist which makes the viewer to reach the edge of his seat for every scene gained the series a global level acclaim. Binge watchers from our country are no exception which is evident through the memes and write-ups surfacing in social media platforms regarding the series since the release of the fourth part. Their obsession towards the series went too far that they started comparing the lead characters of the series with their favourite stars.

Now, one of a follower of actor Kavin, who rose to fame through Tamil Bigg Boss show, compared him with “El professor” on seeing his recent look. In the pictures Kavin was seen with thick beard and long hair. “As i am suffering from quarantine.. !” he wrote as a caption to his post.

As i am suffering from quarantine.. !

One of Kavin’s seven lakh followers wrote “Money heist professor 🔥😁” in the comments and its was liked by nearly 300 users of Instagram. Kavin who is known for his outspoken attitude immediately denied it and said “adei.. 😂 I’m his fan da.. enakae gaandadhu.. 😁” in humorous way.

Check out the screenshot of his repy here :

Kavin who debuted to film industry through “Natpuna Enna nu Theryuma” is all set to appear in “Lift” after his Bigg Boss stint. The film has “Bigil” fame Amritha Aiyer as lead actress. Comment your views on Kavin being compared with the “Professor” and his reaction to it.

A little bit of banter between the players of two teams in a test match is not some new in cricket. However, fans who...

Finally, the makers have unveiled the trailer of one of the year's most anticipated film 2.0, and oh boy, it looks so gripping. Directed by...

For The First Time Murali Vijay Talks About His Friendship With Actor Jeeva !! WATCH !!

Murali Vijay is an Indian international cricketer who plays as a right-handed opening batsman. A regular member of the Indian Test team, he also...