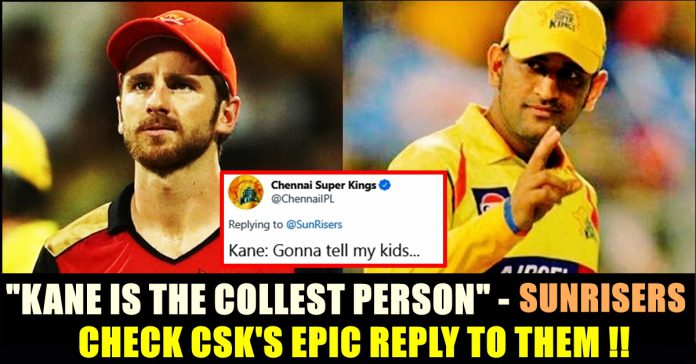 Kane Williamson, the captain of New zealand team won the hearts of millions for his gesture in the finals of world cup 2019. In the match New Zealand played with England, the match tied and went to super overs. Even in super overs both the team scored same number of runs but Team England announced as winners as they scored more number of boundaries in the match. This made the players of New zealand to be dejected in deep depression. But Kane Williamson didn’t do anything animated and remained calm at the situation which made the fans of cricket to love him more.

As far as Indian Premier League is concerned, Kane is captaining the Sunrisers Hyderabad team. As we all know the twitter handles of IPL teams are always active throughout the year and will be updating about their players performance in various forms of cricket. Yesterday, the twitter handle of Sunrisers Hyderabad posted a picture of Kane Williamson and said “Gonna tell my kids this is ice ❄”

Gonna tell my kids this is ice ❄ pic.twitter.com/IO0HiLks06

On seeing this post of Sunrisers, the twitter handle of Chennai Super Kings which is known for its witty replies and humorous posts, decided to reply. Chennai Super Kings is led by Mahendra Singh Dhoni who gained a massive fan following only through his cool attitude in any given situation. To let Sunrisers know that Dhoni is the coolest person in cricket, Chennai Super Kings gave them an epic reply.

In their tweet Chennai Super Kings posted a picture of Kane Williamson and Mahendra Singh Dhoni and said that Kane is going to tell his kids that Dhoni is ice. Check out the reply here :

This tweet from CSk loved by many fans of the team. The tweet received as many as 3 K loves from the users of micro blogging social media platform. However, Sunrisers didn’t keep mum to the reply of CSK as they replied with a picture of Dhoni and Kane facing each other in the field with a caption saying “Winter is coming ❄🧡💛 #IPL2020”

Check out their further conversation here :

Fact: The sun rises even in the winter 🙂

What do you think on this reply provided by the team with Yellow jersey ?? Comment your views below !!

Suchithra, one of the evicted contestants of the ongoing Bigg Boss show, has conducted a poll in her official Instagram account, questioning whether Bala...