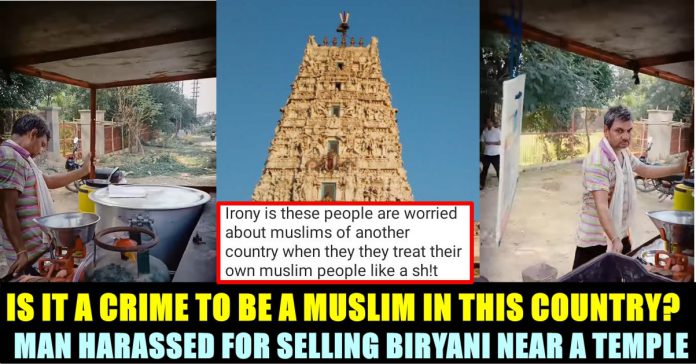 Is It A Crime To Be A Muslim In This Country? Man Harassed For Selling Biryani Near A Temple

Is India really a secular country or just secular in the name of forcing Hinduism on its inmates? A group of Hindu extremists have assaulted an Islamic biryani vendor at Mathura in Uttar Pradesh, reveals a video that surfaced on the internet.

Devraj Pandit of Uttar Pradesh posted a video on Facebook harassing a Muslim vendor who sold biryani near a Hindu temple on the 19th of August 2021. The caption of the video read as “Today got removed a pig’s chicken biryani shop. If all the Hindus support this then India will get rid of these filthy mullahs. Your brother Devraj is always in your service 24*7.”

It was heard the video of harassing the Muslim vendor to move his stall to another place because Mandir (Hindu temple) was near. The biryani vendor was not allowed to sell biryani near the Hindu temple.

This video went viral on Facebook as well as other social media platforms. One more video was posted by the same person Devraj Pandit of accusing a Muslim dosa vendor in Mathura, Uttar Pradesh. After the video started doing rounds on social media, the local police announced that they have taken note of the matter and action is being taken.

A few of the netizens supported this and a few of them opposed this. Now the video is spread widely and causing a religious issue all over the nation. Mohammed Asif Khan (@immak02) a random Instagram user posted this video and the video of harassing the dosa vendor on his IG page. The caption of the video read as, “This video is claimed to be from Mathura, UP. A Biryani vendor was harassed and forced to shift his shop because he was selling biryani near a Temple.”

This video was reposted on the Instagram page, Portrait of a nation on fire (@thelotuswatch). The post was indicated as TW: Islamophobia, where TW stands for Trigger Warning on the 27th of August. The caption of the video is questioning as, “Is it a crime to be a Muslim in this country??” This video reached out to many people.

A post shared by Portrait of a nation on fire (@thelotuswatch)

Right from primary schooling, you must have learnt that India is a secular country. What does secular mean? India is called secular because it does not have any particular religion to follow and its people are free to practice any religion of their choice. On this note, what Devraj Pandit did was wrong. Let the inmates of the Indian subcontinent enjoy its secularism and be democratic.

Check out the reactions of the netizens below.

Actor Dhanush who is known for acting films, predominantly in Tamil film industry, had sent a legal notice to a couple who claimed that...