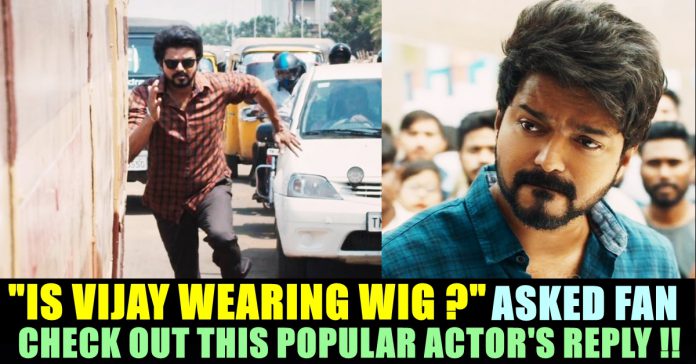 During a question and answer session in his youtube channel “Touring Talkies”, director and actor Chithra Lakshmanan answer to a fan’s question on whether actor Vijay is using wig while acting in movies. He said that not only Vijay, many heroes who are working in Tamil film industry have gone through hair transplantation treatment and confirmed that the actor is not using “wig”.

Actor Vijay looked dapper in “Master” with new hair do and make overs. His looks trended in social media platforms and the attires he was wearing throughout the film are being sold in textiles across the state. The actor’s hairstyle in the film has a separate fan base and many youngsters are carrying the pictures of “Master” Vijay while visiting barber shops.

Now, a follower who desperately wanted to know whether actor Vijay was wearing wig or it is his original hair, asked it to ace director Chithra Lakshmanan through his “Lens” show. Clarifying his doubt, the experienced journalist who has been working in Tamil film industry for past 37 years said that actor Vijay went through hair transplantation treatment. He also gave an added information to his audience by saying that many other heroes of Tamil film industry are going through it.

“Among the lead actors who are currently working in the Tamil film industry, not only Vijay, many of them went through hair transplantation” Chithra Lakshmanan said in the video.

This is not the first time fans are expressing their curiosity over the hairstyles of actor Vijay. During “Master” audio launch, a fan asked Vijay’s best friend Sriman the same question. Sriman replied to him by saying that he doesn’t have a clear idea about it and added that the crew of “Master” film is responsible for his looks. “May be may not be what ever he does is designed by the crew of this film. Bro padam parunghaa no comments now just silence and prayers for corona . You will live my nanban in vjy 64 mASTER” his reply comment to the fan read.

Here’s the reply made by Sriman :

May be may not be what ever he does is designed by the crew of this film. Bro padam parunghaa no comments now just silence and prayers for corona . You will live my nanban in vjy 64 mASTER

On the work front, actor Vijay is expected to be seen in director Nelson Dilipkumar film. The film which is tentatively titled as “Thalapathy65” is bankrolled by Sun pictures and Anirudh has been committed as music composer. His last film “Master” with Lokesh Kanagaraj became a huge hit and a strong buzz is doing rounds saying that the duo are planning to reunite again for “Thalapathy 66”.

Previous articleTamil Hero Trolled Nirmala Sitharaman For Her Statements About Petrol Price Hike In 2013 & 2021 !! MUST WATCH VIDEO
Next articleDMK Approached MNM For Alliance ??