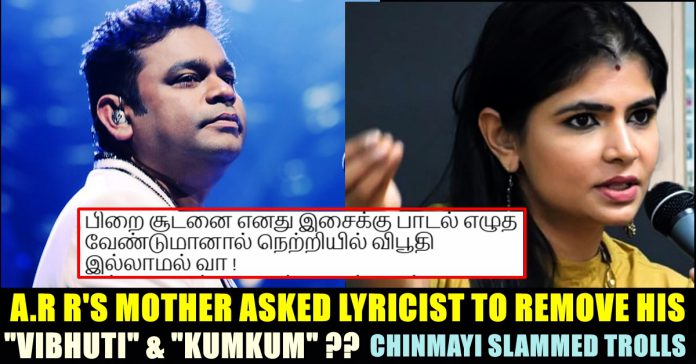 For past few days, an allegation against A.R Rahman saying that he is a religiously obsessed musician has been doing rounds in social media platforms. Singer Chinmayi who is known for her bold statements and outspoken attitude, shared about an incident to prove that the musician is a complete artist irrespective of caste and religion.

People in social media alleged that Rahman’s mother demanded lyricist Piraisoodan who came to her home to remove his “Vibhuti” before working with her son. A video lyricist Piraisoodan himself stating the same also surfaced in the micro blogging social media site, slamming the musician. “His mother asked me not to wear “Vibhuti” or “Kumkum” while working with her son. I didn’t oblige as I have been wearing it since my birth.” Piraisoodan can be seen saying.

This is about #Secularism
Not about #ARRahman
He is poet “Piraisoodan” 👇
In his Interview he told that ARR’s mother asked him not to wear Vibhuthi & Kumkum wen visting their 🏠
But he don’t want to change his habit that was inculcated in him from childhood & stopped pic.twitter.com/VpLsiBibuX

Still Hindu in TN Loved him Irrespective of his Ideology But,This is How Hindus Humiliated & Shamed pic.twitter.com/7O9EsaX9pW

Days ago Rahman said that a gang was acting against him in Bollywood only to stop the opportunities he was receiving. Users of social media also linked both the incidents to spew hatred against Rahman. Now, singer Chinmayi came up with a series of tweets explaining about an incident to prove that Rahman is not such kind of a person.

She asked people who are branding Rahman as a “religiously obsessed” personality to remain silent. She explained about Rahman’s participation in a event she conducted for her mother named as “Kanakabishegam” which many in Hindu space didn’t agree on.

Chinmayi says that she invited A.R Rahman’s family for the event among the very few people she invited. “Saira ji came. Rahman sir came a bit late but every hour, Samidorai anna gave me a call and said “Annan nichayama varuvaru”. And he came. I paid respects to him and Saira ji as well, in the sthana of my Guru and Guru Patni. I know very few, truly spiritual men like AR sir.” Chinmayi’s tweet read.

Chinmayi further revealed that Rahman said “Namaskaram” to her mother. “He being Muslim and my mother being Hindu gaaaasp he came to a Hindu religious function where a woman was getting a Kanakabhishekam done by her daughter!) I only invited some 50 people to this event.” Chinmayi wrote.

I invited very few people for this very radical pooja by normal standards.

I invited Rahman sir and his family. Saira ji came.

For musicians, the God is in the suswara; the pitch perfect note. When we sing, play, nothing exists. No one exists. And the nothing & everything converges in the notes; in the silence after the music becomes inaudible. You won’t get it unless you are an artist.

Le Kanakabhishekam
BTW Rahman sir said Namaskaram
to my mom also. (He being Muslim and my mother being Hindu gaaaasp he came to a Hindu religious function where a woman was getting a Kanakabhishekam done by her daughter!)
I only invited some 50 people to this event.
Le end. pic.twitter.com/wUYpxe85RR

A.R Rahman and Chinmayi collaborated in a number of hit songs. On seeing this tweet thread from the singer, fans of the musician thanked her for the timely tweet.

A 21 year old Delhi based youtuber named Namra Quadir got arrested by Police officials for allegedly cheating Rs. 80 lakh from a businessman....

Tamil nadu chief minister and co-coordinator of AI ADMK Edappadi K Pazhaniswamy is busy campaigning for his political party across the state for the...