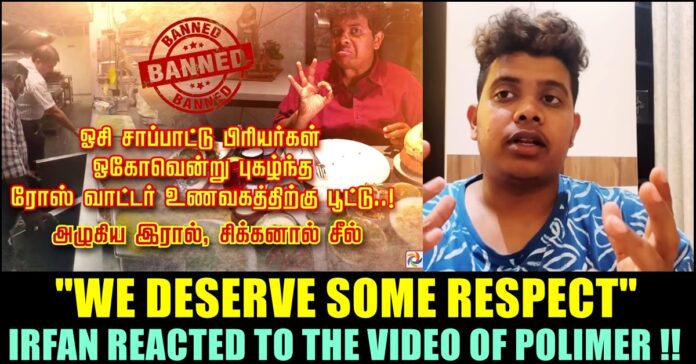 Famous youtuber Irfan reacted to the report of Polimer in which they mentioned him as someone who reviewed the food items of Rosewater restaurant by eating them for free and misled people to a place where rotten meats are being coked. The youtuber reacted to the 4 minute 17 seconds long video report of Polimer by sharing the posts of his followers and fellow food reviewers through his Instagram stories. In one of the posts Irfan shared, an Instagram user named Peppa Foodie said that the restaurant fuc*ed it up and Irfan has nothing to do with it. 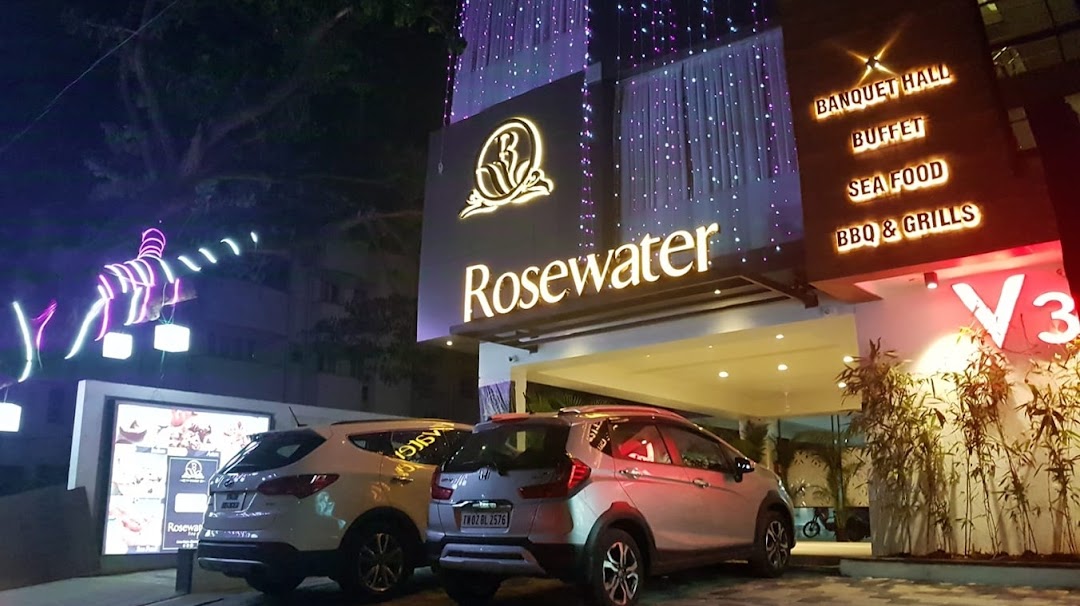 A popular restaurant named Rosewater which is located in Anna nagar, Chennai got sealed after authorities found 45 kilograms of rotten chicken, mutton and prawn in their kitchen. It has been reported that many youtube foodies including Irfan who enjoys 3 million plus subscribers reviewed the restaurant and recommended it to their followers. The inspection was made after a customer complained about a prawn served to him being a rotten. Polimer news channel showed the pictures of Irfan reviewing the restaurant and blamed him.

Being a lifestyle vlogger, Irfan is mainly concentrating on uploading food reviews in his channel. He has been visiting some of the famous and unknown hotels, restaurants to make reviews about it for his audience in a way of making things easier for them in choosing which hotel to visit. He has visited abroad countries and experimented with different kind of food items for the followers of his channel as well.

According to Polimer, along with Irfan, some other youtubers who claim themselves to be food reviewers, visited the Rosewater restaurant and tasted the food for free of cost before recommending it to the public. The news channel said that the Rosewater restaurant became popular after Irfan and other youtubers recommended it and it got sealed now after serving rotten food to their customers. 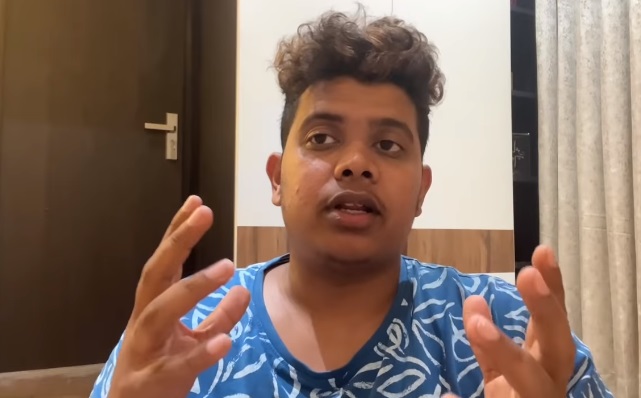 On Tuesday, Officials of the Food Safety department officials conducted a sudden inspection to the restaurant. The videos shows the officers demanding the workers in the kitchen to show the meat items which were kept for cooking. It all happened after a customer who went to the restaurant, reportedly complained about the rotten prawn that was served to him.

Based on his complaint, the inspection was initiated by the officials. The video showed the officials questioning the workers about meat items being kept. Reports says that the kitchen, meat heating instruments and other places of the restaurant were not maintained properly. 10 kilograms of prawn, 45 kilograms of chicken, mutton and fish were recovered and sent for the inspection.

“What is this ?? will you eat in this ?? it looks so dirty” an officer questioned a worker pointing out a metal cover that is used to close the food items. The officials imposed a fine amount of Rs. 5000 and ordered renovation for the hotel. Only after the renovation, the hotel is allowed to function again, that too after an inspection, said the officers. The hotel got sealed temporarily as per the order of the officials.

Reacting to the report of Polimer, Irfan has been sharing the posts of his followers and supporters through which they could be seen slamming the news channel for their way of reporting a news and dragging Irfan unnecessarily into the issue.

“It irritates me to see the video. We put in our Health, Time and Efforts to be called like this uhh ?? We deserve some respect for Fu*k sake and nobody will eat something bad and say Aga Ogo Vera level and all. The restaurant fu*ked it up that’s it” a supporter of Irfan said with many others saying the same.

Check out some of the stories shared by Irfan below : 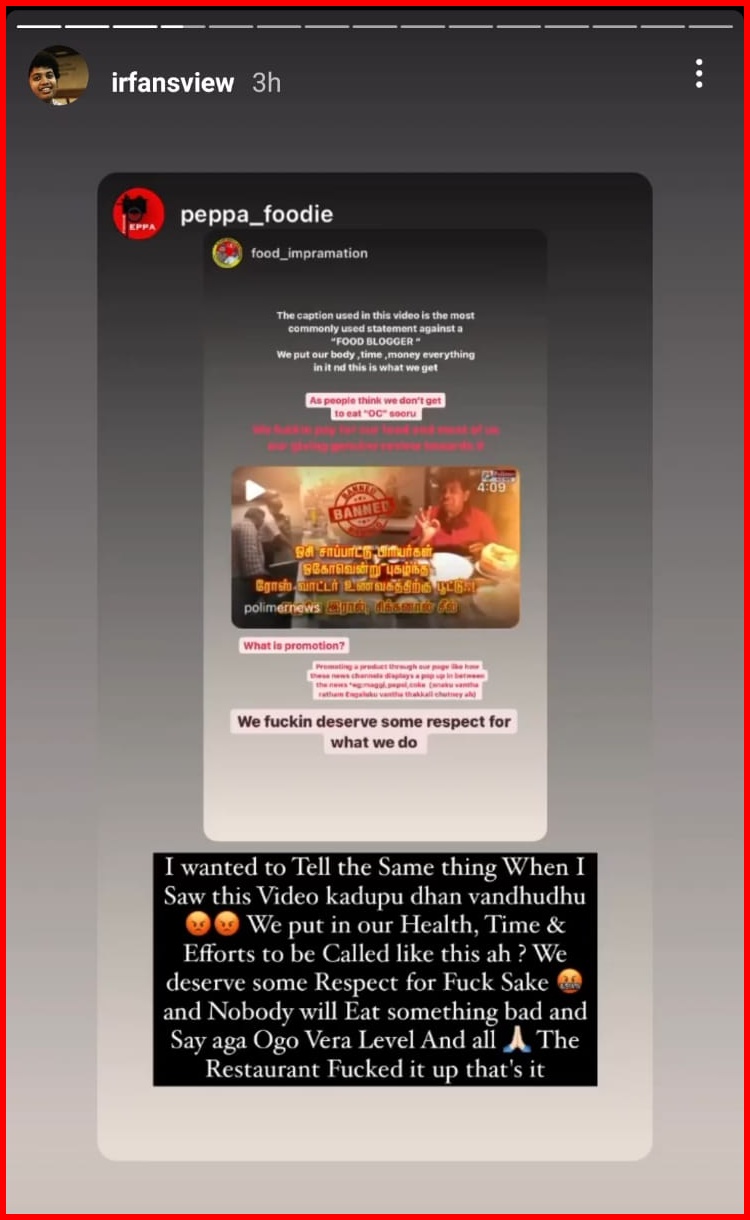 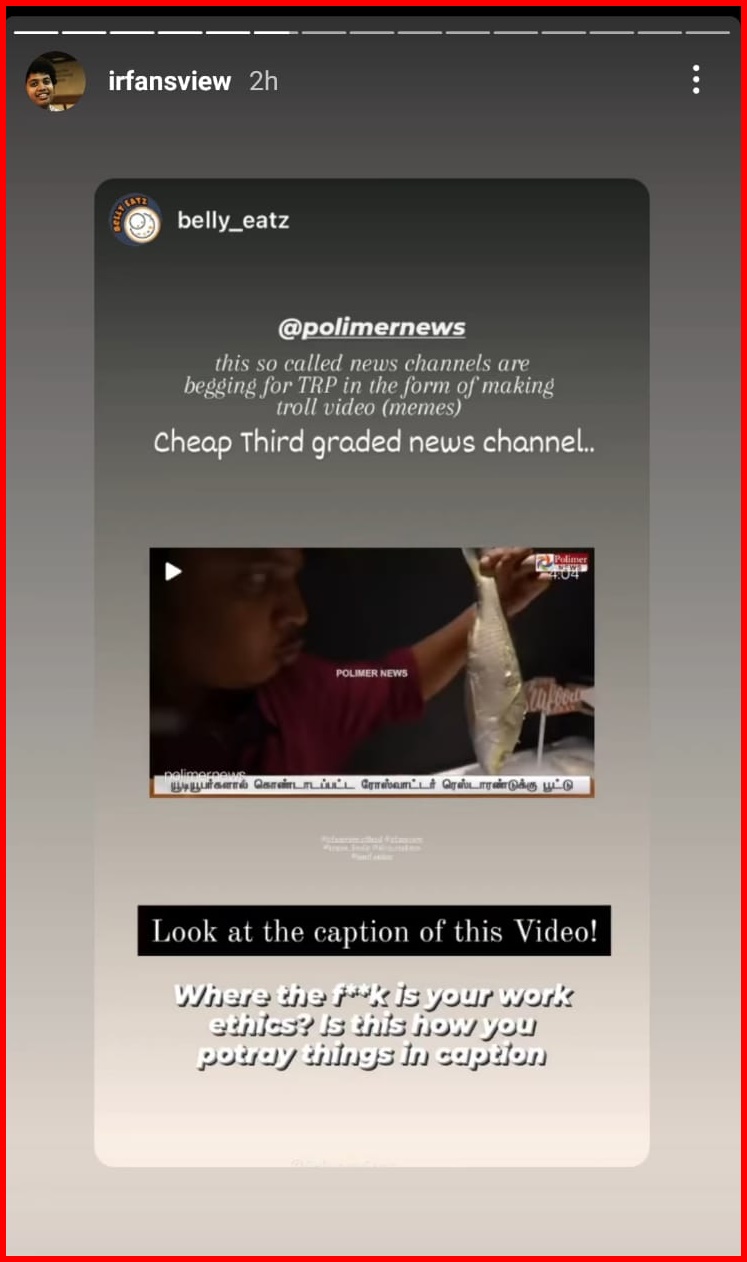 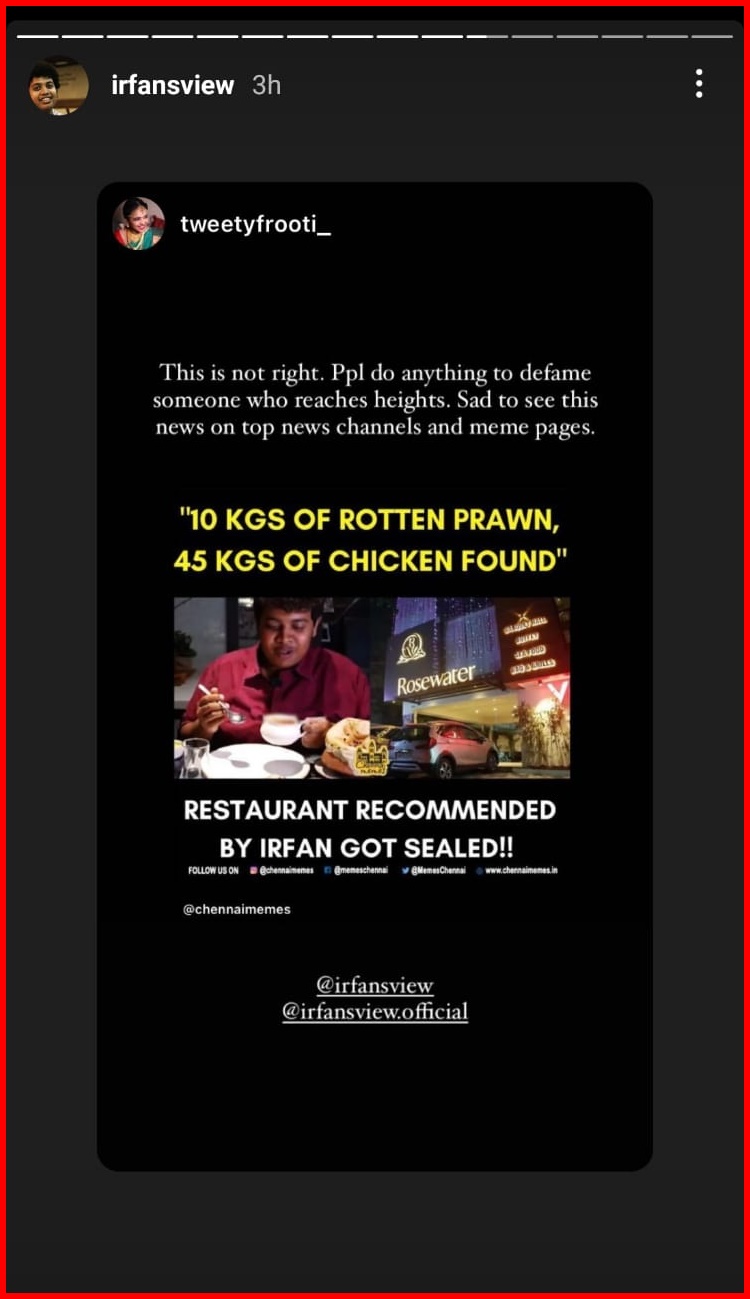 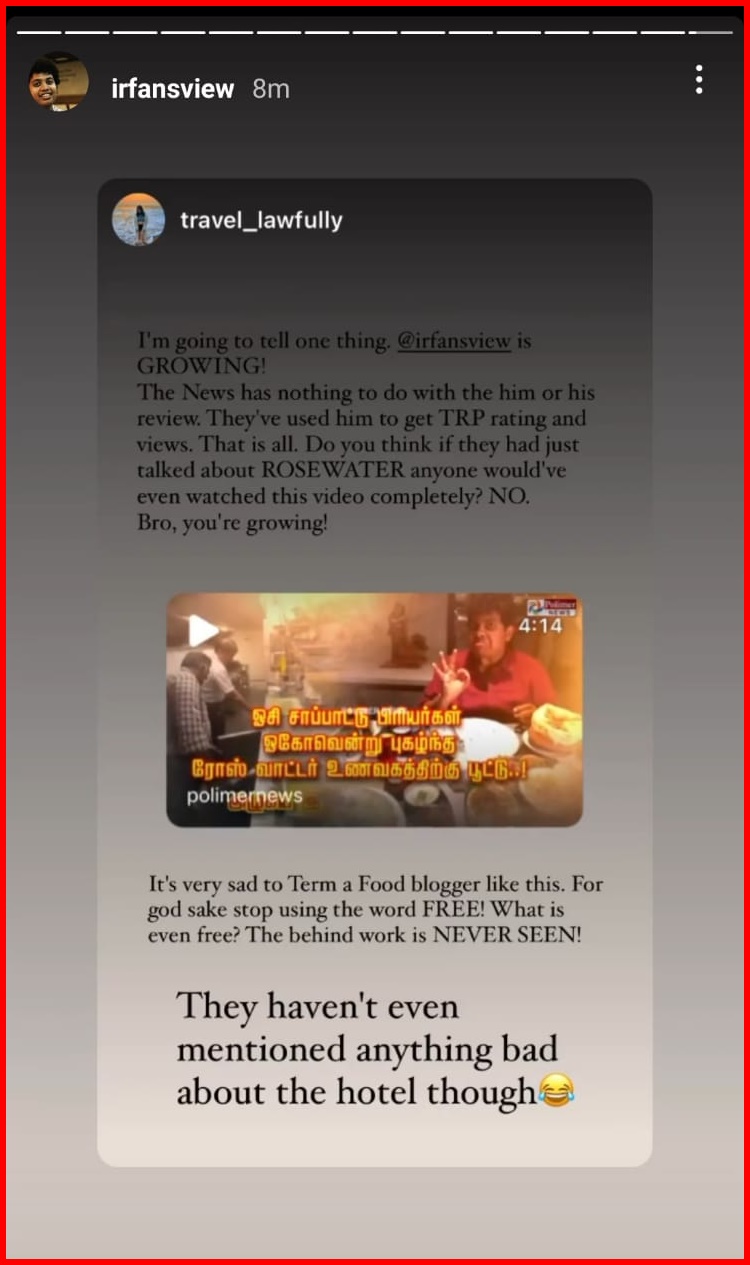 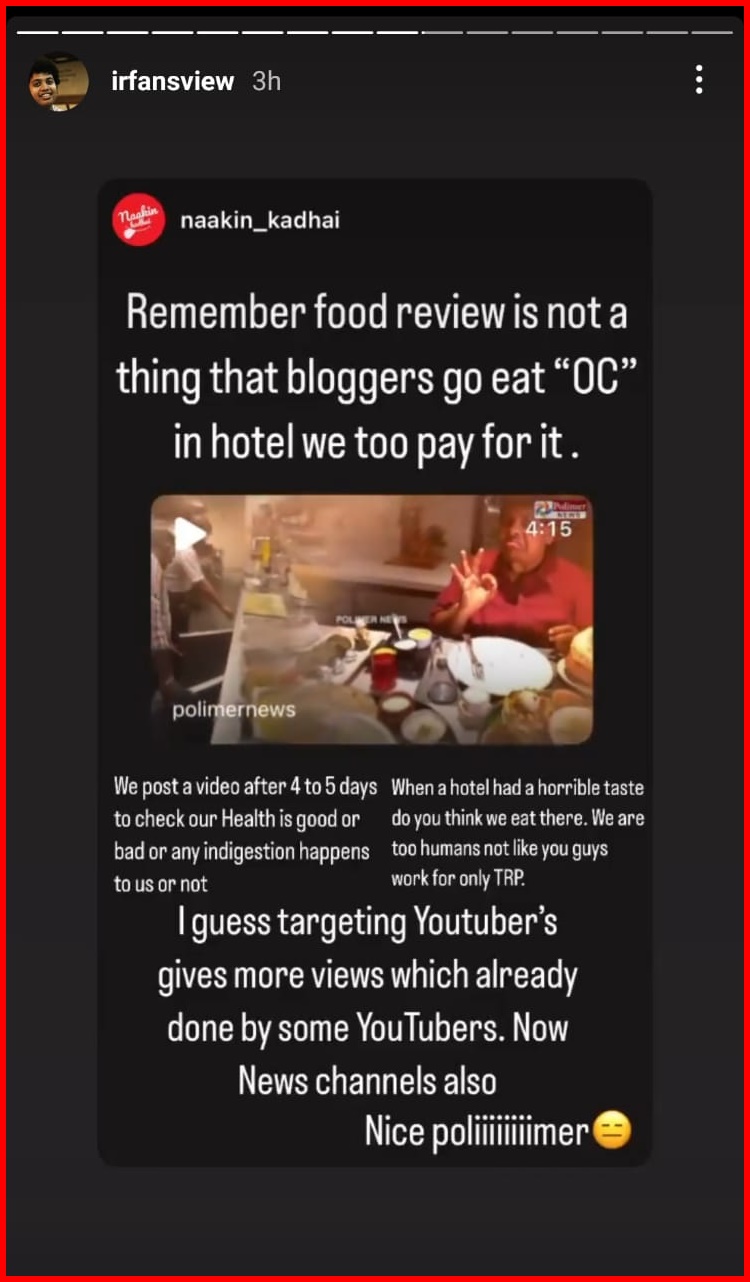 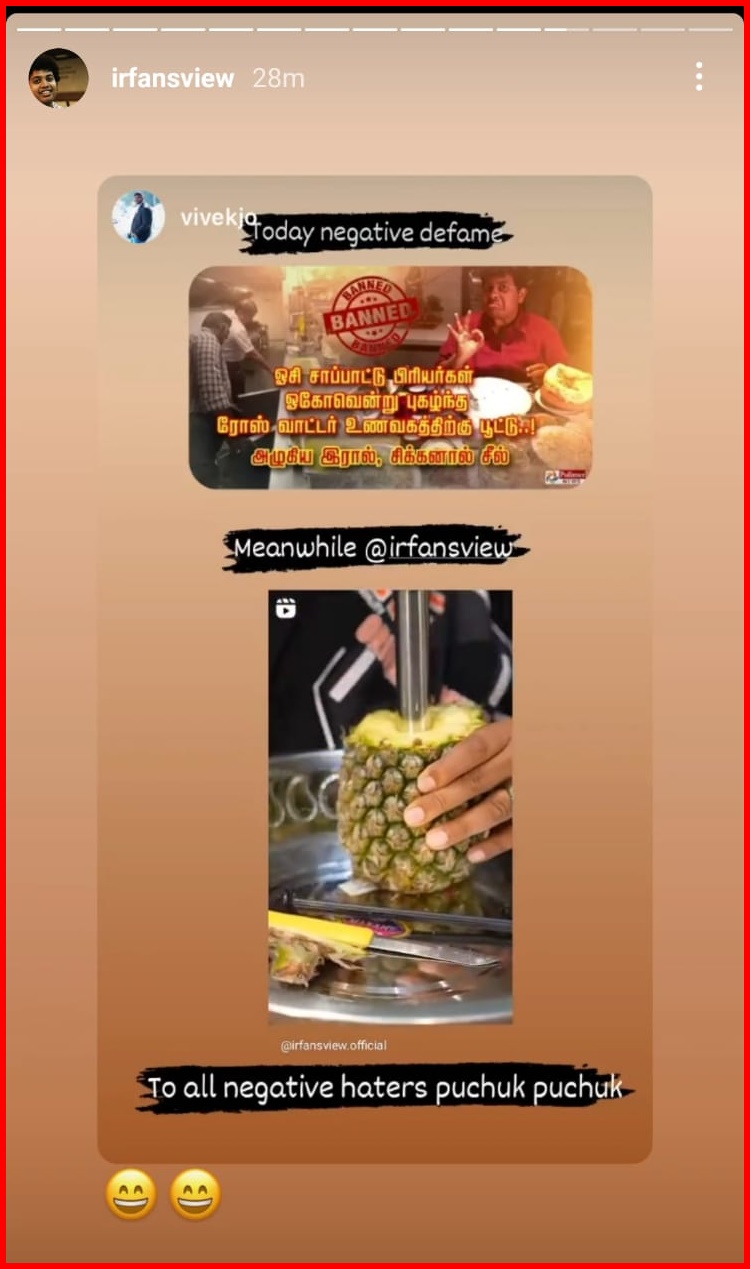 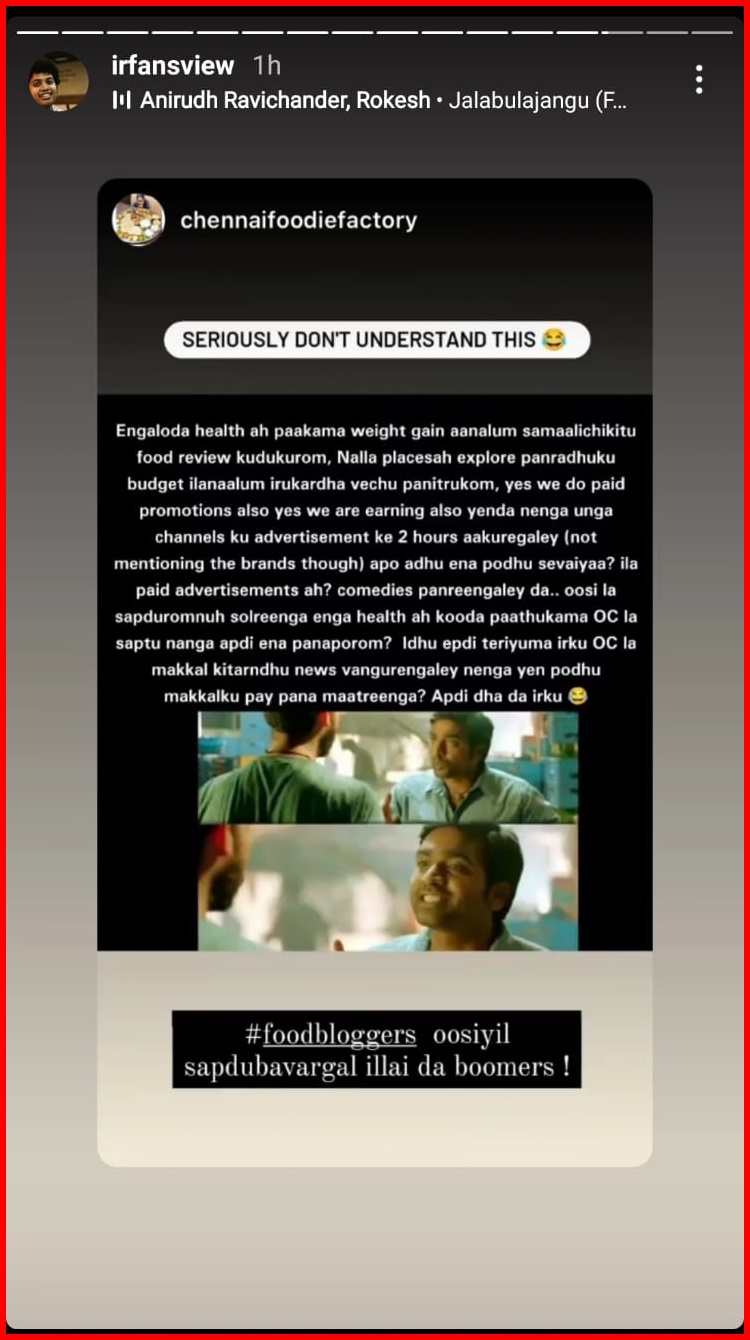 Previous article“You Are The Most Wonderful Actor I Have Ever Seen In My Entire Life” – SRK To VJS !! WATCH
Next articlePlip Plip Released An Explanation Video For Their “Vikram” Roast !!

Actor Vivekh replied to one of a twitter user who posted a fake news about his donation towards Corona relief fund. As lockdown got...

Priya Anand’s New Pictures Are Too Hot To Handle !! Prashanth Gets Trolled By The Actress For Trying To Troll It !!

Actresses taking part in photoshoots often to build their profile is common. Everytime, if an actor conducts a photoshoot, their fans who go crazy...

Director Gautham Vasudev Menon expressed his frustration over the kind of reviews "Blue Satta" Maaran has been giving. The filmmaker said that it makes...