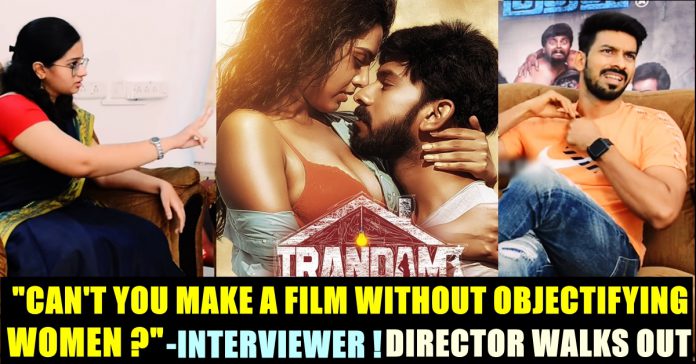 Director Santhosh P Jayakumar of “Iruttu Arayil Murattu Kuththu”, “Hara Hara Mahadevaki” and “Gajinikanth”, denied giving interview to Ashameera Aiyappan of New Indian express after she asked him to answer on why he couldn’t make an adult film without objectifying women. Santhosh, after trying to justify the way he showed women in his films, decided to walk out of the interview without completing it.

“Irandam Kuthu” is all set to release in theatres amidst the COVID 19 outbreak. The filmmaker, regarding the release, posted a tweet saying “To All who tot #IrandamKuththu is not censored and will not clear censor. Here’s the censor certificate and release date. Happy Diwali Folks. 14thNov2020. See you all in theatres” he wrote in a tweet.

Legendary filmmaker Bharathi Raja who directed Rajinikanth and Kamal Haasan in his filmmaking career which spanned over 4 decades, released a press note condemning the teaser’s content. Now, while interviewing the filmmaker, journalist Aasha said to Santhosh that she has no problem with filmmakers making films with adult content and asked him why he couldn’t make an adult film without objectifying women.

“I literally counted the shots of the teaser that got released. It contained only 3 frames without a woman’s cleavage or thighs. Can’t you make a film without objectifying women ?” asked Aasha to Santhosh to which he replied “It doesn’t like I can’t” .

Aasha further questioned “Why you didn’t make such film ?”. Santhosh immediately asked back “Why should I make ?”. He further said that it is easy to ask questions but a filmmaker has the responsibility of considering the need of the story. Their conversation turned heated argument at one point and Santhosh decided to stop participating in the interaction.

“When you start giving importance to a woman’s cleavage rather than her face, it is obvious for us to ask question” says Aasha to which Santhosh responds “Since I started giving promotional interviews, I have decided to give interviews only to those who has the maturity to understand what adult comedy is”.

“It is a waste to talk with people who doesn’t have the capacity of understanding.” he says to the camera. “Is this woman saying that women shouldn’t wear bikini or wear clothes that shows her cleavage? I don’t know” he further adds. The interview ends abruptly after Santhosh removed his mic, denying to hear the explanation of Aasha.

Sharing the video link in her official twitter account, Aasha wrote “Today reminder: Naama kudukara mariyadhaya elarum vangikavum, thirumba kudukavum maatanga. Santhosh P Jayakumar walks out of my interview calling me senseless after I ask about the explicit objectification of women in his adult comedies.”

Santhosh P Jayakumar walks out of my interview calling me senseless after I ask about the explicit objectification of women in his adult comedies. https://t.co/noNalUZ4BN

Director Rathnakumar of “Aadai” replied to this tweet of Aasha asking her to ignore. “Just ignore @aashameera. More power to you” he said in his tweet.

“They Failed To Telecast It” – Ayesha About Vikraman After Getting Eliminated

Ayesha who recently got evicted from the Bigg Boss show, is currently busy giving interviews to youtube channels and other media portals. In one...