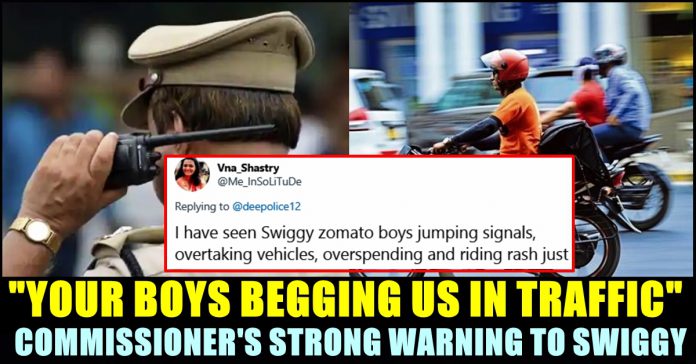 Twitter became a place for police officers to issue their warnings and statements for the people who are making trouble. We have came across many witty replies provided by the twitter handles of police administrations of various cities. Now for a change, a IPS officer himself has made his presence in the micro blogging social media site to address an important issue.

Mr. Bhaskar IPS, Commissioner of Police, Bangalore city has posted a tweet through his official twitter account, asking PIzza companies to extend the delivery timing from 30 minutes to 40 minutes. As we all know, a customer can have a pizza for free if a delivery exceeded the said timing of the Pizza company. In order to make it on time, it is the young boys who are involved in the food delivery job risking their lives.

In a way of making awareness on this issue, Commissioner Bhaskar wrote “Do we have the heart to get a free pizza from a kid who is risking his life just because he crossed over 30 mins. Am seriously considering asking Pizza companies to make it 40 mins as these kids risk their lives by breaking all Traffic rules.”

Do we have the heart to get a free pizza from a kid who is risking his life just because he crossed over 30 mns. Am seriously considering asking Pizza companies to make it 40 mns as these kids risk their lives by breaking all Traffic rules.

To this tweet, one of his follower said that guys who work for food delivering apps such as Swiggy, Zomato are jumping signals and violating traffic rules. She said that she is worried about the boys who are risking their life. To her tweet, the official twitter handle of Swiggy asked her to contact a phone number if she witnesses any of their delivery guy violating traffic rules.

Hi there, we understand your concern. We do not condone traffic violations of any nature. If you witness the same, please highlight it to us by contacting us at 080-46866699. Have a good day ahead.

This tweet irked Bhaskar who immediately intervened the conversation by providing a warning to the food delivery app. The commissioner said that their delivery boys are the biggest violators of traffic rules. He warned them by saying that their management will get arrested if any Swiggy kid bleeds of road.

Mr Swiggy Cares, you are the biggest violators and have the temirity to tell me that you adhere to rules, your boys beg cops to let them go as you penalize them, next time a Swiggy kid bleeds on road, be sure, you management will be behind bars.

One more twitter user tried to troll the commissioner by saying that delivery boys are responding faster than the police officials to which Bhaskar said “Mr Spunky, call 100 and summon a Hoysala (Police Patrol).. then tell me of your experience”

Mr Spunky, call 100 and summon a Hoysala (Police Patrol).. then tell me of your experience

These tweets and replies from the police official are receiving positive response from the public as they are feeling safe to have higher authorities active in a medium which is filled with negative personalities.

What do you think on these replies from Bhaskar IPS ?? Comment your views below !!

Previous articleLokesh Kanagaraj Revealed About The News Which Inspired Him To Make A Film !!
Next articleKS Ravikumar Tried To Get Out Of Simbu’s “Saravana” ?? WATCH