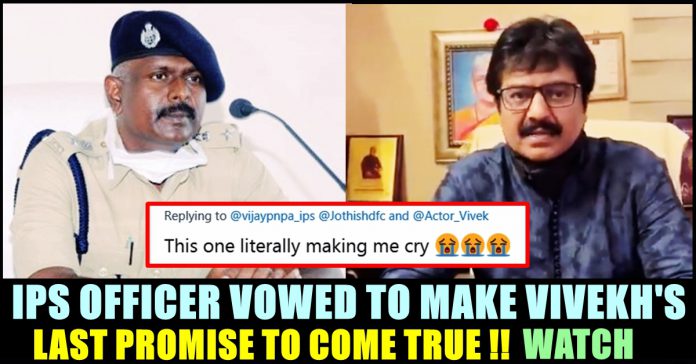 IPS officer Vijayakumar uploaded a video in his official twitter account and promised to take forward actor Vivekh’s one of the last wishes. The actor wished to plant 5,000 trees along with the students of Sacred Heart college located in Tiruppathur ahead of World forest day. But the event got postponed due to the COVID 19 outbreak. Now, as the actor left the world before making wish come true, IPS officer Vijayakumar has uploaded a tweet saying that the promise of the actor will be taken forward.

“I am talking to the students of Sacred heart college, Thirupathur. I wished to create awareness by planting 5000 trees along with you students ahead of the World forest day. I was looking forward to complete the event. Today I was supposed to reach Tirupathur by the noon.” Vivekh could be seen saying in the video shared by the IPS officer.

“However, due to the second wave of Covid 19 virus, Health minister advised not to let students to gather in large number to prevent the virus spread. I talked to Tirupathur collector Mr. Sivanarul I.A.S and S.P Vijayakumar. After the election, when the hike in the positive cases of COVID 19 virus gets decreased, I am planning to conduct a huge event to plant the trees along with the students” Vivekh said.

“I don’t want any of the students to get infected with the COVID 19 virus due to this event. I hope you students will understand. Thank you so much, we will meet and catch up very soon for plantation” the actor promised.

Many people commented on the post saying that they will make his promise come true. “Please take serious step to implement his idea sir. So that he will be watching us with Happy face. Thank you sir.” said a follower whereas many others encouraged Vijayakumar IPS to initiate the movement.

Please take serious step to implement his idea sir. So that he will be watching us with Happy face. Thank you sir.

What a positive message, though last.. Keeping up his promise will be the best tribute to him and bring him back alive through the trees…

This one literally making me cry 😭😭😭

He might have departed earlier, but the seeds he planted will live hundreds of years radiating his name in the generations to come. RIP #விவேக்

On the wee hours of Saturday, actor Vivekh who predominantly appeared in Tamil films, died in the hospital after suffering a cardiac arrest. On the morning of Friday, an unconscious Vivekh was brought to the SIMS hospital in Chennai. He reportedly suffered a cardiac arrest due to a 100% blockage in heart vessel.

It is reported that the actor was revived and underwent an emergency coronary angiogram followed by angioplasty. He was then put on Extracorporeal Membrane Oxygenation support to circulate blood through an artificial lung back into the bloodstream. In a way of clearing the air on whether Vivekh suffered cardiac arrest due to the COVID 19 vaccine shot he took on Thursday, Dr. Raju Sivasamy, vice president of SIMS hospital said that Vivekh’s condition was not related to the vaccine he took.

Thala Said “I Looked Exactly Like You While Doing My First Film” Mahat Opens For The First Time !! Watch Video !!