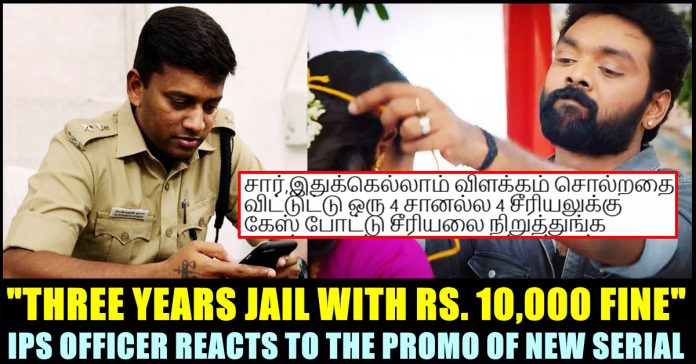 IPS Officer Dr. Varun Kumar who is currently serving as a Superintendent of Police of Tiruvallur district, reacted to the promo released by Vijay TV for one of their upcoming serial which is titled “Thendral Vanthu Ennai thodum”. He highlighted how the promotional videos contradicts the law and pointed out Section 4 of the Tamil nadu Prohibition of Harassment of Women Act prohibits harassments of women within the premises of places that is meant to worship God. The video has been receiving condemnations from all over the Internet for promoting violence, consent breaching against women.

The serial is going to be telecasted in the channel soon and the makers have made the short video to let their target audience know about it. Vijay Television is known among the television audience for the serials they are telecasting. “Bakkiyalakshmi”, “Pandiyan Stores”, “Bharathi Kannamma”, “Raja Rani” are some of the widely watched serials of the channel.

Through the recently released promo of the upcoming serial, we could understand that it is about the relationship between a thug who beats people for a living and a girl who returned from United States after completing her studies. Irrespective of their background, profession, caste and religion, a male and a female could lead a life together as per their wish, is something that we all are aware of. A particular part of the promo which irked the online users is, the way how the female lead romanticized the atrocious behaviour of the male lead, in the name of following Tamil “culture”.

The promo starts with a young girl (female lead) visiting a temple with her family members. An elderly woman who sees the girl, says “Dear Abinaya, despite of spending time at America for your studies, you look gorgeous in our traditional look”. Replying to her, Abinaya says “Do you think I would give up my tradition just because I have studied in a foreign country”.

In the mean time, a man enters the temple angrily and beats a groom who just married his love without the consent of their parents. He decides to remove the “Mangal Suthra” from the bride to undo the wedding that just happened. Abinaya who was watching all these, slaps him and confronts him saying that he has no rights to remove the “Mangal Suthra” as the wedding was done in front Goddess “Amman”.

To prove his point about tying a “Thaali” couldn’t be approved as wedding, the male lead forcefully drags the female lead and ties one to her without her consent and also applies a bindi on her forehead. The promo ends with a visual which shows the girl with a sad face, following him who is still looking angry.

The promo is being hated by the users of the micro blogging social media site for so many reasons. Many felt that most of the Tamil serials justifies harassment and abuse of women by portraying the lead female characters as “pure”, “holy” and “traditional” wives. Among the many who condemned, Dr. Varun Kumar IPS, uploaded a tweet reminding the makers about the law while responding to journalist Kavitha Muralitharan’s tweet. Also Read : Promo Of Vijay TV’s New Serial Upsets Audience !!

“Whoever commits or participates in or abets harassment of woman in or within the precincts of any educational institution, temple or other place of worship, bus stop, road, railway station, cinema theater, park, beach, place of festival, public service vehicle or vessel or any other place shall be punished with imprisonment for a term which may extend to three years and with fine which shall not be less than ten thousand rupees,” read the tweet uploaded by Dr. Varun Kumar IPS.

Tweet of the IPS officer garnered huge attention with many opining that banning a number of serials would teach them a lesson. A user went one step ahead and asked whether she has the rights to file legal complaint against the channel.

@vijaytelevision PLEASE CHECK THIS OUT.

Also,fine of 10K is not at all gonna make any difference, they will pay the fine & continue doing toxic shits. This kind of shows should be banned & the concerned has to be punished with imprisonment 🙏🏾 @VarunKumarIPSTN @PoliceTamilnadu https://t.co/RDNMcT7PSB

8 Times MS Dhoni Gave Us A Master Class In Life Lessons !! Don’t To Be Missed !!

If only life came with a guideline of what to do and what not to, it would have been so much easier! While we...

After Police officials arrested 24 people for attacking a junior doctor, after the death of a patient in Assam, four more people got arrested...

STR’s Mass Transformation : Requesting His Fans To Celebrate Like Never Before !!